France’s Jewish community recognizes the dangers inherent in a victory for Le Pen. 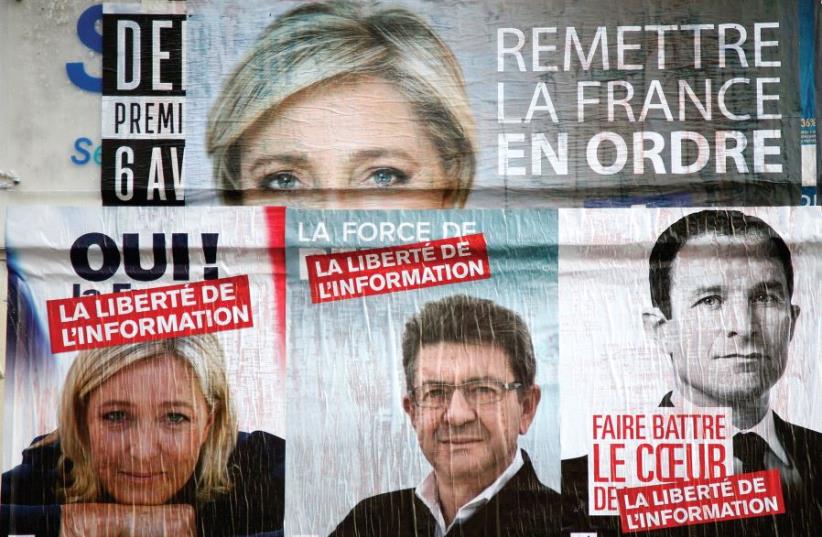 CAMPAIGN POSTERS for candidates Marine Le Pen of the National Front (FN), Jean-Luc Melenchon of the Parti de Gauche, and Benoit Hamon of the Socialist Party who were running in the 2017 French presidential election
(photo credit: REUTERS)
Advertisement
Ill winds are blowing over the French Republic. For the first time in the history of the country’s presidential elections, neither of the mainstream parties advanced from Sunday’s first round of voting, and, more ominously, some 40% of French citizens voted for parties on the extremes of the political spectrum: 21.3% for far-right National Front candidate Marine Le Pen and 19.6% for the far-left Jean-Luc Mélenchon and his La France Insoumise, “France Unsubjugated,” party.Both the far-left and the far-right are Euroskeptic; anti-establishment; populist; want to pull France out of NATO; are enamored with Russian President Vladimir Putin; are apologists for the butcher of Damascus, Bashar Assad; and blame the country’s economic woes on globalization and the free market.As one French observer put it, “the nation of reason is sliding into extremism.”While there are clear differences between Le Pen and Mélenchon – in particular on immigration and religion – the similarities in the platforms of the two parties are sufficient that, according to latest polls, around 20% said they would vote for Le Pen in the second round and around 30% said they would abstain.Mélenchon himself, while urging “not one vote for Le Pen,” has refused to back the independent Emmanuel Macron, who topped the first-round vote. While Macron would appear to be headed for victory in the May 7 second round, Le Pen’s success in appealing to elements of the hard-left is cause for concern, and she may also be able to garner votes from those who voted for Republican candidate François Fillon.While the polls give Le Pen less than a 30% chance of success, there are scenarios where she is seen as able to win with a low voter turnout or failure to maintain a united front against her, As we have seen in Brexit and Donald Trump’s United States election win, the polls can get it stunningly wrong.Europe cannot afford the complacency that would allow Le Pen to win and bring the far-right into power. Victory for Le Pen would undermine the stability of the European project, perhaps even bring it to and end, and would strengthen the forces of extremism throughout the continent, as well as the dictators on its fringes.On the domestic front, a win for the National Front candidate could have severe consequences. The exodus of France’s young and talented could intensify as Le Pen stifles the economy with protectionism and sets on fire the poor immigrant communities, providing fertile ground for the Islamist radicals who have already committed such horrendous attacks in the country.France’s Jewish community recognizes the dangers inherent in a victory for Le Pen.The cautious words in the run-up to the election have been thrown to the wind and community leaders are now openly talking against her. Francis Kalifat, president of the CRIF umbrella group of French Jewish communities, called Le Pen a “candidate of hate” and said Jews should rally for Macron.From the Israeli perspective, Le Pen comes with a tainted legacy. Her father, Jean-Marie Le Pen, the founder of the National Front, is a Holocaust denier. She has sought to distance herself from his views, even expelling her father from the party, but she recently downplayed the role of France in the roundup and deportation to concentration camps of French Jews in 1942.On the other hand, Marine Le Pen is a staunch supporter of Israel, unlike the defeated candidate Mélenchon, who has backed boycotts of Israel and even called for a “right of return” for Palestinians displaced in 1948. But there can be no cooperation with Europe’s rising right, as President Reuven Rivlin noted on Holocaust Remembrance Day.“We must resist unholy alliances with extreme right-wing elements,” he said, adding that “there is and will be nothing in common with antisemites in any shape or form.”Le Pen’s toxic vision cannot be allowed to triumph.