Left-wing protests only strengthen the Right

We only get one president at a time, and so the protesters should step back and acknowledge that people like me are more likely to look at what they are doing and move further to the Right. 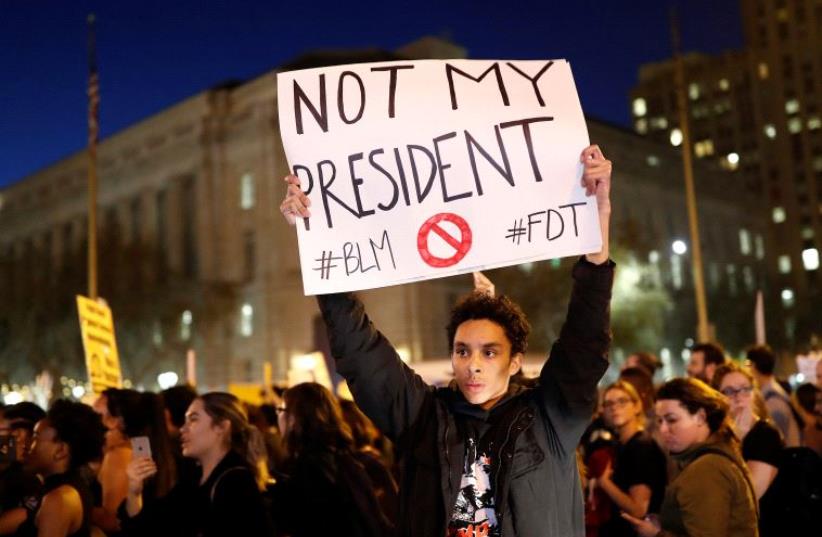 A demonstrator holds a sign during a protest in San Francisco, California, US following the election of Donald Trump as the president of the United States November 9, 2016.
(photo credit: REUTERS)
Advertisement
America seems more sharply divided today than it has been for generations.With a new president in the White House, only 14% of Democrats approve of his performance, compared with 90% of Republicans. The Pew Research Center has found that Americans of both parties are increasingly disapproving of a president of the opposite party, and that at the height of the election campaign 81% of Donald Trump supporters viewed life in America today as worse than it was 50 years ago, compared with just 11% who said it is better. Among Hillary Clinton supporters’ 19% said life is worse, compared with 59% who said it is better.Those divisions have been on sharp display since Trump won the election, with mass protests across the country. While mistakes have been made by the president and his staff during the breaking-in period (we can’t exactly call it a honeymoon) there have been calls for his impeachment, or worse. The media pounce on his every word and mistake. “Not my president,” the protesters declare, while the Democrats in Congress, with their minority numbers in both houses tried feebly to block the appointment of the new cabinet members.Clearly, despite the loss of Congress and the White House, the Democrats have failed to learn the lessons from the populist victory of 2016. In different areas of the country there were localized concerns, but a few things united citizens in the 37 states in which a majority voted against Hillary Clinton.Millions of Americans want to feel good about their country and want government to stay out of their lives except to provide a strong economy, protect their rights and defend them from harm. They also want borders that mean something and a prevailing sense of law and order, not condemnation of the cops and excuses for criminals.As much as some moderate Democrats might like to take this into consideration and steer the party at least to the middle, the party is in the process of moving even further Left.As The Wall Street Journal reported on February 22, the Bernie Sanders wing of the party “has engaged in an intramural fight to remake the party in a more populist, liberal mold.”The goal of Sanders’ Our Revolution movement of five million, forged from Sanders’ surprisingly powerful presidential bid, is “making party officials and elected Democrats more accountable to activists, and replacing them if they aren’t.”That means the crowds that often take to the streets berating the police, waving Palestinian flags, supporting illegal immigration and occasionally turning violent will be steering the ship.Will Tom Perez as newly minted leader of the party have a better clue to why so many voters find this abhorrent than his predecessor, Debbie Wasserman Schultz? Paul Gigot, editorial page editor of The Wall Street Journal, said after the Democrats chose their new leader that the selection of Perez shows the party isn’t ready to do any “soul searching about what happened in 2016,” but rather wants to “bring the Sanders people and their energy into the party.”The difference between Perez and runner-up Rep. Keith Ellison in that race, Gigot said, was not ideological but rather a choice of “insider vs. outsider,” since Perez was an Obama cabinet member. Ellison, with his troubling history on Israel and past support of Louis Farrakhan, is now the deputy party chairman.Trump critics say they’re outraged over rising antisemitism, yet they have no problem raising the banner of hate against the Jewish state by calling for either its outright destruction or its severe weakening via economic sanctions and boycotts they think will pressure Israel into relinquishing territory to the Palestinians. The same voices never seemed as perturbed when antisemitism rose during the Obama years.“Where are the liberal leaders when Jewish cemeteries are desecrated and campuses are painted with swastikas and racial slurs?” asked Brooklyn Assemblyman Dov Hikind, a Democrat, in a statement.“How are the leaders of the Democrats communicating with and reining in their followers when these crimes are committed? It’s simple.They’re not. Instead they’ve found an easy answer: Blame Trump.“Should the President of the United States do more to stop these crimes? Absolutely. But to blame these antisemitic incidents on the Trump presidency is absurd. Antisemitic crimes were up 9% from 2014 to 2015. Does former president Obama own that?” The continued protests weeks after the inauguration are appalling, at best. Are there that many people without jobs that have so much free time on their hands? The president should be given a chance to articulate his agenda, set the country on a new course. So President Trump is a reality TV star.Yes, we knew that. But I find myself less outraged at him and his policies than I am at the relentless critics who did not want to see Obama go and wanted to continue socialist policies by electing Senator Bernie Sanders, or Hillary Clinton.It has been nearly 30 years since a president handed the White House over to someone of the same party.We only get one president at a time, and so the protesters should step back and acknowledge that people like me are more likely to look at what they are doing and move further to the Right, not the direction they advocate.

The author is a financier, real estate developer and investor in commercial real estate. He is on the board of Trustees for the American Jewish Congress, co-founder of Magenu.org and president of OurPlace, a non-profit organization that provides support, shelter and counseling for troubled Jewish youth. He is a frequent commentator on political and social services matters.Twitter: @E_Verschleiser
Advertisement
Subscribe for our daily newsletter