The sheer size of the catastrophe is hard to understand. 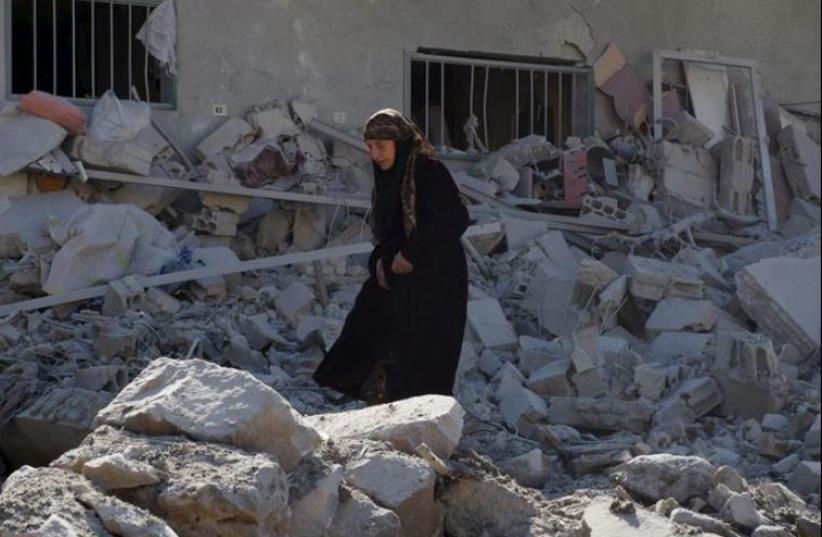 A woman makes her way through the rubble of damaged buildings after airstrikes by pro-Syrian government forces in the rebel held town of Dael, in Deraa Governorate, Syria February 12, 2016.
(photo credit: REUTERS)
Advertisement
Last Monday, a hospital run by Medecins Sans Frontieres (Doctors Without Borders) was pummeled by an air strike on Maaret al-Numan in Syria’s Idlib province. The charity said at least 25 people were killed.Turkey blamed Russia for the air strike, which was condemned at the UN as a violation of international laws, but Moscow issued a sharp denial, saying this was another case of baseless accusations against it. The attack, which was condemned as a violation of international law, occurred in one of the areas controlled by Syrian rebel groups that have been increasingly targeted in the past months as President Bashar Assad and his Russian, Iranian and Hezbollah allies make a push to take back the country.The Syrian civil war has cost an estimated 500,000 lives and made some 11 million people refugees. Millions have ended up in Jordan, Lebanon and Turkey and almost a million have fled to Europe. The sheer size of the catastrophe is hard to understand. For instance, more than 1 million people are considered to be under siege throughout Syria in a war that pits numerous groups against one another.Life for refugees is uncertain and harrowing. A piece on female refugees on Al Jazeera discussed how they are particularly vulnerable. Women are giving birth while fleeing fighting, stopping for just days in a hospital before continuing their journey. Others have to care for babies in the cold waters of the Mediterranean as they go to Europe.Last Sunday, aid reached the besieged Yarmuk camp in Damascus after an astounding nine months. In some places people are starving to death. In others the extremists of Islamic State have been busy beheading people, and cleansing cultural history and minorities.Things have been moving quickly since last year’s Russian intervention. Kurdish forces known as the YPG have pushed ISIS back. They are seen as allied with the Syrian regime, and Turkey, which is fighting its own conflict against the Kurdish PKK which it views as a terrorist organization, has warned the Kurds in Syria not to press their advance.Meanwhile, Assad has been slowly defeating Syrian rebel forces. ISIS remains stagnant in the middle of all this.In the last week Turkey was joined by Saudi Arabia in condemning the Russian and Syrian moves, which are backed by Iran and Hezbollah. Reports noted that Saudi Arabia dispatched jets to the Incirlik airbase in Turkey, the same base the US uses in its own work with the YPG against ISIS.That readers who are confused by the interplay of these organizations, how the US works with one group, while the Turks oppose that group and yet share the same base, is understandable. Former US ambassador to Turkey James Jeffrey told NPR “it’s terribly confusing to those of us who have been working in the region for 30 years.”The problem is that after five years of Syrian war and an almost unprecedented level of destruction and refugees, it behooves everyone to learn lessons and not be confused.There are 600,000 refugees who Turkish Deputy Prime Minister Numan Kurtulmus warns may cross his border in coming months if the Russian bombing continues. Angela Merkel, siding with the Turks, has supported a no-fly zone near the border to allow refugees breathing room.It is unconscionable that the international community has done so little. NATO has begun naval patrols off Greece and there is intention to return refugees to Turkey.Why did European countries ignore this problem for more than a year as refugees arrived on the continent and were shifted from one country to another with the bare minimum of checks? In a discussion at the Jewish People Policy Institute last week, former US diplomat Elliott Abrams called the US’s response to the Syria crisis “immoral.” The international response has been nothing less. We have witnessed the use of chemical weapons, ethnic cleansing, the destruction of ancient religions, the bombing of whole cities and even of hospitals with banned munitions.As in Rwanda, Cambodia and elsewhere, the world has failed to stop the carnage in Syria. Boutros Boutros Ghali, the former UN chief who died on Monday, called his inaction during the Rwandan genocide his greatest failure. The bloodletting in Syria may not be genocide in the strict sense of the word, but it shows that the world has learned nothing about using muscular diplomacy and aid to save people and if necessary, to save countries from themselves.