A journalist who works in conflict zones needs to have good ties with all sides. 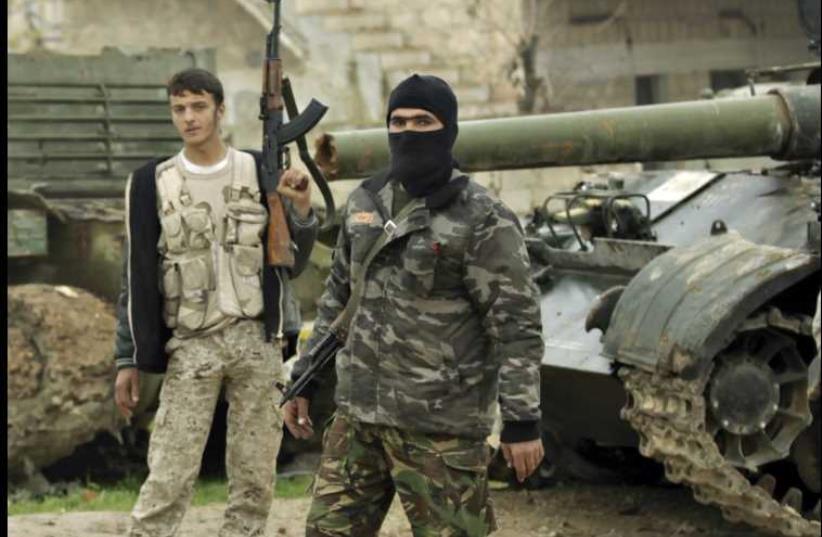 Ahrar al-Sham Islamic rebel fighters stand beside tanks left behind by forces loyal to Syrian President Bashar Assad, in Idlib.
(photo credit: KHALIL ASHAWI / REUTERS)
Advertisement
The American decision to put journalist Ahmad Zaidan on a terrorism watch list is an obvious violation of the press freedom which the United States has claimed to be the defender of. In early May it was revealed that Al-Jazeera’s longtime Islamabad bureau chief had been singled out and labeled a member of the terrorist group al-Qaida, and also accused of being a member of the Muslim Brotherhood. Those who authored the decision either do not know what journalism is or they are really obsessed with hiding the truth.A journalist who works in conflict zones needs to have good ties with all sides.That’s necessary to provide the whole story and not only one side of it.I met Zaidan when he came to Aleppo, Syria three years ago to cover it for Al-Jazeera after the Free Syrian Army (FSA) seized vast areas around the city. The person I met was a professional journalist and a very moderate person; he was religious but I have never seen a single sign of extremism in this regard.See the latest opinion pieces on our page One of his colleagues at Al-Jazeera who worked in Afghanistan told me that “Zaidan had good links with most of the factions in Afghanistan and this was the secret behind his success there, which made Al-Jazeera the first and most important source with regard Afghanistan and Pakistan.”Zaidan in fact is one of a larger group of Arab and Muslim intellectuals who do not accept the American classification and listing of people, associations, parties and movements as terrorist groups, and who have a firm belief that America’s “imperialist policies” contributed to the ascent of violence in the region. Because they refuse the definition of some groups as “terrorists,” one might expect journalists like Zaidan to cover news in a manner not pleasing to the US, and I think this is the main reason he is on the terrorism watch-list.Beyond the issue of Zaidan, it is important to discuss the effect on other Syrian journalists working in the field, who are often in contact with groups labeled as terrorists. The Syrian journalists, most of whom are moderates that do not subscribe to jihadist ideology, condemned the decision to label Zaidan a terrorist and showed great sympathy in their writings and in social media for a man who, one wrote, “Was among the first journalists covering the Syrian tragedy.”For them, a journalist being considered guilty because of having connections with groups listed as terrorists by the United States makes journalism less safe.One colleague of mine, a freelance journalist working in Aleppo and Idlib in northern Syria, said that “al-Nusra front – a group affiliated with al-Qaida – is one of the most powerful groups in both cities. We need to contact them to know what’s going on and what will happen [in the future]. Sometimes we \are forced to pretend to be proponents to be allowed to take videos and pictures.“I hate their ideology but with the new American standards, am I am terrorist?” Ibrahim is another journalist working for a local opposition site, and he told me, “We know the American hypocrisy very well, but we never expected it to be so impudent as to not even respect its declared values which assert press freedom.”He noted that if American journalists were to see the conditions under which these journalists have to work in Syria, they would understand that “a man like Ahmad Zaidan and all journalists working in conflict zones must be thanked, not put on terror lists.”The larger issue we face is that these kind of reports of journalists being described as terrorists or assumed to be working for terrorist groups, when in fact they are reporting on them, creates a chilling effect for journalists, who fear their work is misunderstood and that labels can put them in danger on both sides.The author is a journalist from Syria. His name has been changed to protect his identity.