A tale of London in World War II that asks hard questions without easy answers. 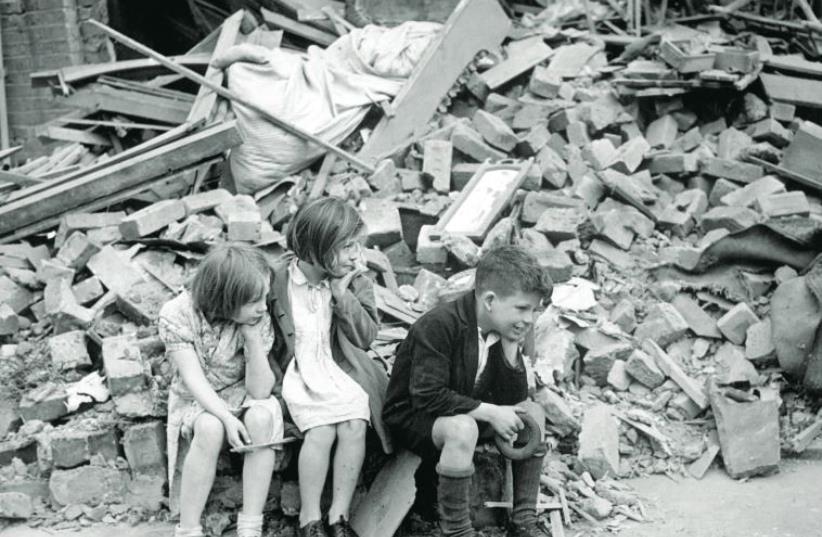 Children in the East End of London, made homeless by the Blitz during World War II
(photo credit: WIKIMEDIA)
Advertisement
The characters in Chris Cleave’s novels are well acquainted with suffering. The grieving widow in Incendiary who lost her husband and child to a terrorist’s bomb, the two women in Little Bee (one a Nigerian orphan, the other an unfaithful British wife) bound by a horrifying act, the competitive and troubled Olympic cyclists in Gold – they are all intimately familiar with loss and perseverance.Cleave’s latest novel – which is wonderful, not surprisingly – continues to explore human endurance in all of its many facets, this time during World War II.Like most Brits, Cleave had family in that fight: a grandfather stationed on Malta during its siege and two grandmothers in London, one an ambulance driver and the other a teacher.Written with wit and grace, Everyone Brave Is Forgiven is not a chronicle of their war years – Cleave is too imaginative for that – but it is inspired by their lives and letters, their deprivations and their resilience.World War II is the ultimate romantic war, at least if you watch the old movies, and accordingly, Cleave shapes Everyone Brave Is Forgiven around a painful love triangle, that staple of World War II fiction.But Cleave’s work is not a cliché; in this novel, romance is imperfect, love fickle.Courage doesn’t guarantee a happy ending, and even a mostly good heart can be blind to ugly truths.At first, the characters tend to be droll and cavalier about what’s about to happen; when the story opens in 1939, they are yet unable to imagine the terrible ravages of the Blitz to come. They are of a class not given to histrionics.Young Mary North, well-bred, independent and determined to be part of “this dreaded and wonderful thing,” signs up to volunteer as soon as war is declared, “in case her mother said no.” Mary dreams of some sort of glory but is drafted into a less-than-glamorous profession – teaching (most of the male teachers have enlisted).Her fate grows even less exciting when she learns her students will be sent to the countryside for safety (and she’s not allowed to go with them).In her quest to find a new teaching post, Mary enlists the help of Tom Shaw, who is running one of London’s school districts.Tom tries to put her off but falls for her almost immediately (he also wangles a small class of misfits for her to instruct).At 23, he has no plans to fight – “[O]ne isn’t being unpatriotic by declining to rush off like a schoolboy to fire popguns at the Germans,” he says casually to his flatmate Alistair Heath.Alistair, though, has different ideas – he has signed up. As he endures shame, abuse and exhaustion during training in rural England, Tom and Mary fall in love.Later, on leave, Alistair joins the couple for lunch. His intended date is Mary’s tart-tongued friend Hilda. But he can’t take his eyes off Mary, who returns the favor.Cleave has fun with his characters’ default reserve and understated humor.Mary and Hilda joke about being ravished by German invaders. Tom imagines that having faith in a lover requires great courage, though “one did not get a medal for letting go a woman’s hand on a gray Saturday morning in the middle of a European war.” When Alistair’s troop flees the chaos of Dunkirk, they pick up a downed airman in the Channel and the following ensues: After a while Alistair said, “How was the water?” “Brisk,” said the RAF man. “How was France?” “Crowded.”But as the Blitz intensifies and Alistair is sent to Malta to withstand the Axis siege, Everyone Brave Is Forgiven grows darker, and tragedies mount (one brutal scene involving a German pilot who ejects over Malta and is caught by angry villagers will haunt you for a good long time).Cleave, who never writes simplistic stories, refuses any heroic flag-waving and shines a light on an unpleasant side of Britain during the war years: the vicious racism that’s every bit as insidious as German anti-Semitism. After taking a young black student, Zachary, under her wing, Mary earns derision and disapproval from strangers, family, friends, even Tom.“It isn’t for us to change how things are,” Tom tells her. Mary disagrees.“We saved the zoo animals and the nice children, and we damned the afflicted and the blacks,” she retorts, reminding him of who got evacuated and who didn’t. “I do everything in my power to make sure those poor souls won’t learn the obvious lesson.”Can we demand righteous change in the middle of a national crisis? What takes more courage, dying in battle or living in vain? Everyone Brave Is Forgiven asks hard questions with no easy answers, reminding us of the price we pay every day just for being human. (Miami Herald/TNS)