A lazy, one-sided media that cannot think out of the box missed the point. 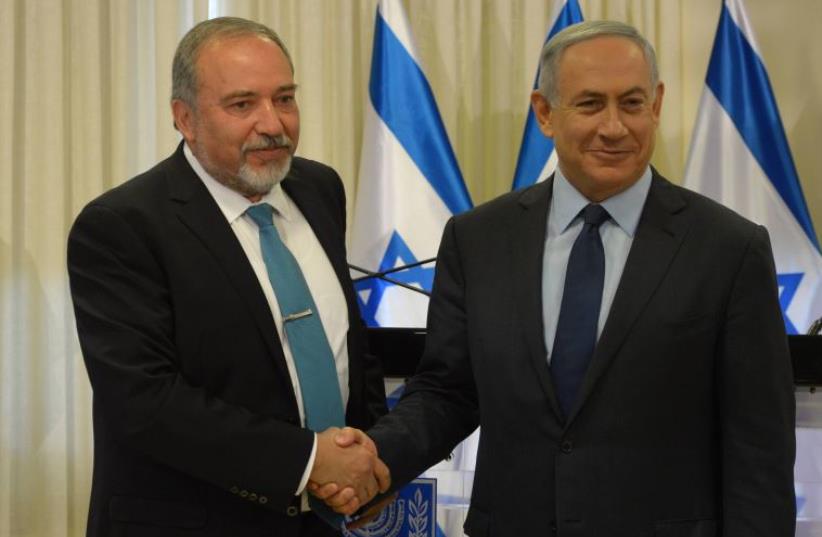 Netanyahu and Liberman
(photo credit: AMOS BEN GERSHOM, GPO)
Advertisement
The Ya’alon-Liberman drama dominated the airwaves this past week. Much ink was spilled and airtime filled with the comments of senior pundits, most of whom were full of praise for outgoing defense minister Moshe Ya’alon and extreme fear of his incoming replacement Avigdor Liberman.The appointment of Liberman is indeed a serious matter; defense touches on the very essence of our existence in the Middle East. Still, the media did a poor job. It missed the really important issues and doted on the trivial ones.We all are aware of the content of Ya’alon’s recent declarations defending deputy chief of staff Maj.-Gen.Yair Golan and his incendiary remarks, or his immediate condemnation of the soldier Elor Azaria for his shooting of a terrorist in Hebron, or defending the chief of staff for his remarks that IDF soldiers should not shoot to kill 14-year-old girls armed with scissors.These remarks were at the center of an ideological struggle between applauding liberals and critical hardliners.The liberal media went out of its way to support Ya’alon, describing him as the last sane voice in the Netanyahu government. What the media did not do is ask itself and the experts what Ya’alon’s record as defense minister really was. What does he leave as his legacy and imprint on the IDF? After all, he was defense minister for the past three years, not a short time in Israeli politics. His tenure included Operation Protective Edge during the summer of 2014.Yaakov Amidror, former national security adviser, summarized what he believed Ya’alon’s three major achievements were. One was arranging for a longterm budget for the IDF. Second was maintaining good working relations with the IDF’s top brass, and third was bringing about relative quiet around the Gaza Strip and lowering the flames of the recent terrorist acts against Israelis.At the same time though, we know today that Ya’alon did not understand or at least did not prepare the IDF for the tunnel threat. When Bayit Yehudi leader Naftali Bennett repeatedly questioned Ya’alon and the IDF in the cabinet as to what he was doing to contain the threat of the tunnels he was ignored or worse, castigated for having the gall to question the judgment of the defense establishment.As the transcripts reveal and as the ombudsman’s report indicated, Bennett was right, while Ya’alon and the top brass realized only belatedly the strategic threat of the tunnels.Channel 2 TV’s military correspondent Roni Daniel used the top-rated Friday night news roundup to categorically state that: “After this week, I’m not sure I want my children to remain here.” This made quick headlines, but was not serious journalism.The fact is that he did not even consider the idea that Ya’alon’s preference of a “quiet for quiet” policy is leading to the continued rearmament of both Hezbollah and Hamas and might just be much more dangerous than Ya’alon’s replacement by Liberman.But even on the question of the army’s morality and Ya’alon’s defense of army officers’ freedom of speech the media did not get it right. Army officers are government employees who by law do not have the freedom to criticize the government publicly. Setting the legal issue aside, if an IDF general had publicly stated during the Gaza disengagement (which was planned by then chief of staff Ya’alon) that the mass expulsion reminded him of the actions of Nazi Germany, would Ya’alon have defended his freedom of speech? Would this same media been supportive of that general? Of course not.Let us recall the letter sent by Col. Ofer Winter to his soldiers during the 2014 war, in which he wrote: “I raise my eyes to heaven and read together with you ‘Hear O Israel, our God is One, God of Israel, please make sure that we are successful in our endeavor.’” Winter was roundly criticized, especially by Haaretz, and did not receive the same support from Ya’alon that Golan did. Has Ya’alon been called out for his lack of consistency? The media went to great lengths to remind everyone about Liberman’s various pronouncements concerning the need to retake the Gaza Strip and end Hamas rule there. But it did not even try to consider Liberman’s record as foreign minister. Did he prove himself an able administrator? Did he create any change? Did he leave any legacy as foreign minister? As readers of this column know, we have expressed criticism of foreign minister Liberman, noting that he did not create change in Israel’s image abroad.Just as Ya’alon did not foresee the strategic threat of the Gaza tunnels, so Liberman did not foresee the anti-Israel sentiment abroad, especially in Europe, and did not do anything about it. There was no review of how our ambassadors are preparing for this issue, how they cope with it, whether they defend the government’s policies on the settlements or support those who consider them as illegal.These questions and many others should be asked, and answers should be given. But a lazy, one-sided media that cannot think out of the box missed it.

The authors are vice chairman and chairman respectively of Israel’s Media Watch (www.imediaw.org.il).
Advertisement
Subscribe for our daily newsletter