Big governments today, dominating GDP accounts, wield much the same economic power as that of the monarchies of old. 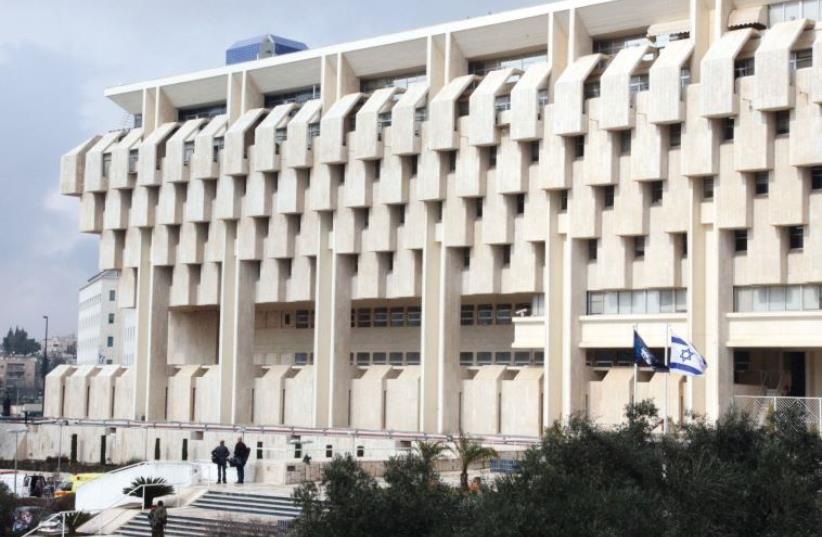 FLAGS WAVE at the entrance to the Bank of Israel building in the government quarter in Jerusalem.
(photo credit: MARC ISRAEL SELLEM/THE JERUSALEM POST)
Advertisement
The Israeli government has become bigger and bigger over time, now controlling large swaths of the economy. In fact, for every shekel spent in the Israeli economy, 42 agorot are spent by the government, whether that be at the national, regional or local level. This gives it sizable power and influence over the state of the economy and, in turn, the population at large.The perils of big government were dramatically condemned by the prophet Samuel. He decried the Israelites’ request for a king as the official head of a centralized administration, exclaiming, “I will reject your bitter complaints at the burdens of the centralized political order entailed by the human bureaucracy for which you lust.”Of course, for any institution to wield such large spending power, it needs to have a good source of funding, and the government is privileged to have the richest money fountain of them all: eight million Israeli citizens. The purpose of paying into the system is that, ultimately, one gains more than if one did not, however rabbinic scripture is doubtful as to whether such arrangement works well in practice. Pirkei Avot (Ethics of the Fathers), compiled in 190 CE, gave a haunting verdict on the relationship between government and man, warning, “Be careful with the government, for they befriend a person only for their own needs. They appear to be friends when it is beneficial to them, but they do not stand by a person at the time of his distress.”A landmark feature of Western civilization is that people pay taxes to the state when they are prosperous in exchange for social welfare should their income suffer.Such a “social contract” is designed to “automatically stabilize” the economy. The tax revenues received in time of plenty enable governments to boost the economy during difficult periods through administering social welfare payments to out-of-work citizens, and as a result prop up consumer spending. However, in Western countries, where taxes are typically highest, many feel let down that they loyally paid into the system when working but gain inadequate welfare when they fall into hardship or retire. This is exactly what Ethics of the Fathers warned against more than 2,000 years ago.Government spending is of course paid for by the taxpayer, so the more spending, the higher the tax burden now or in the future. This comes at an opportunity cost, since it means that money can no longer be spent or invested by businesses. Instead, it enters the pockets of the state. This leads to “crowding out” of the private sector in two broad ways. Firstly by literally taking a share of their profits, it diminishes their power to operate, and secondly by raising the cost of borrowing (if the government borrows to spend, it pushes up the demand, and in turn the price, of loans). This is bad news for the economy, since as has been shown throughout history, firms motivated by profit are more likely to make the most efficient use of a country’s resources than inefficient bureaucracies with political-point-scoring goals that so often plague governmental organizations.The serious ramifications of a big, well-funded state become particularly stark when one focuses on how it warps the incentives of businesses. Israeli companies pay a hefty 26.5 percent of corporate profits in tax, significantly exceeding several other advanced economies such as the United Kingdom (20%). However, look into the details and the situation is far worse. When you consider that dividends are taxed between 25% and 32%, almost half of distributed corporate profits end up in government hands.Unsurprisingly then, tax receipts on corporate profits as a percentage of GDP in Israel stand at more than 3%; one of the highest in the OECD. All of this disincentivizes business expansion and job vacancies – the best way to increase standards of living and lift people out of poverty – and leads to the plethora of social ills that come with unemployment.The Index of Economic Freedom (IEF), which measures how free businesses are to conduct business in a country, without government hindrance, ranks the high level of government spending in Israel as having a “repressive” impact on economic freedom, with a score that puts it at 136th place out of 178 countries.The index also shows how Israeli business are hard hit by state interference, not only by taxes but also by regulatory requirements, where completing licensing requirements takes over 200 days on average. Regionally, the ease at which Israeli businesses can set up, operate and close ranks Israel behind Bahrain, the United Arab Emirates and Qatar.After 400 years of being led by judges and prophets, the Israelites beseeched Samuel for a king “like all the other nations.” Samuel succumbed to the will of the people and anointed King Saul, triggering the long line of kings of Israel. The warning came back to bite. As the Book of Kings and Chronicles detail, the switch to a central administration was characterized by tyrannical leadership, grievous sin and ultimately a divided nation bereft of its Temple and 10 tribes “lost” to the annals of history.Big governments today, dominating GDP accounts, wield much the same economic power as that of the monarchies of old, and the voice of Samuel is reverberating in Israel and throughout the Western world as bloated governments curtail economic freedom.

The author is a Research Fellow at The Jerusalem Institute for Market Studies.
Advertisement
Subscribe for our daily newsletter