Moderates of the world must unite

This is a religious war of radical Islamist groups in opposition to everyone else, including their moderate Muslim brethren. 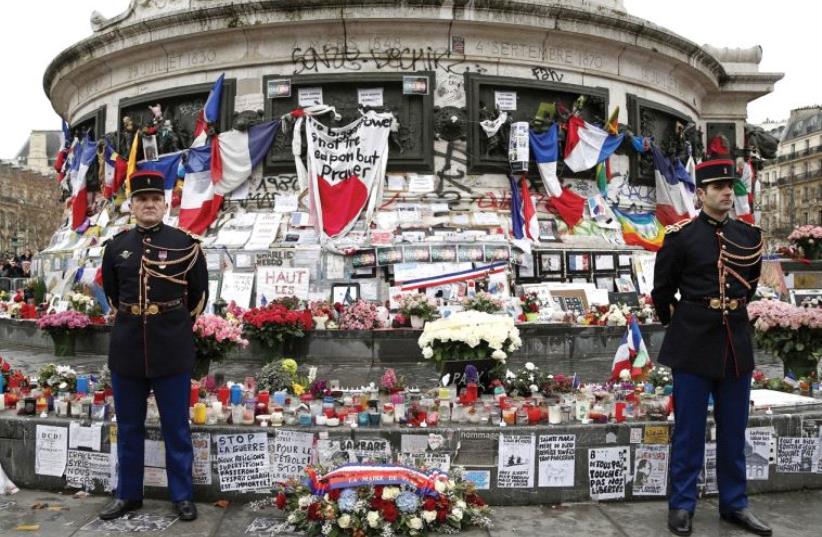 The Place de la Republique square where people paid tribute to the victims of last year’s terror attack.
(photo credit: REUTERS)
Advertisement
As an Israeli, I have watched the worrying trends in our region and across the world, and naturally am gravely concerned.We have seen a rise in a new form of global terrorism, that operates with an antique ferocity, spreading hatred and fear through modern technology.It is wreaking real devastation – death, destruction and hardship – alongside a terrible, general feeling of a lack of security.There can be no doubt that this is a religious conflict, but it is not one that pits the entire Muslim world against the free one. This is a religious war of radical Islamist groups in opposition to everyone else, including their moderate Muslim brethren.Because these radical, fundamentalist forces have made their fight about our values – liberal democracy, civil liberties, diversity and equality for all – we can allow for no compromise. No deal can be struck with this devil. But even as we battle them, these forces are doing damage to us from within – and it is up to us to recognize the profound side effects that this fight is having on us, citizens of the free world.As terrorism grows, the tide of refugees in Europe rises and as fear seeps into our daily lives, xenophobia and racism surface, and often transmute into political parties, exploiting fear for political gain. This is how our enemies manage to shift our liberal, democratic values – from within our treasured democracies. Israel, unfortunately, is no exception: the phenomenon of increasing extremism among politicians and their political parties can be found here as well.And so our fight is twofold: first, against these radical Islamist terrorist groups and second, against the prejudice it produces within us. It is to this dual battle that I call for us, liberal moderates of the world, to unite.We must unite our leadership on all levels – local, national and international – in common cause and steadfast belief that terror not be allowed to reign. It is our job, as adherents of democracy, to defend the true meaning of the word.Democracy cannot be summed up in the mere technical act of casting a vote.Parties that seek to participate in democratic elections should observe to a set of universal democratic (and Jewish) values: respect for human rights, freedom of religion, the rule of the law, and, of course, the rejection of terrorism and accepting the monopoly on the use of force by government. The choice must be ballot or bullet.Without this step – without agreeing to this system of values alongside the procedural trappings of democracy – we will see more and more terrorist organizations taking advantage of the voting “process” to inflate their legitimacy and magnify their power. In other words, before we as an international community give our blessing to any country holding elections, we must ensure that the parties involved will not only adhere to democracy technically, but will also uphold it as a set of values – we need to write an international, universal code for elections that will set these values in stone. Hamas’s success in Gaza and Hezbollah’s entry into the Lebanese government are two good examples of how designated terrorist organizations can circumvent democratic values while technically working within democratic systems. But it is not too late.Of course, this is not enough. We must also have a vision, and give the next generation something to believe in and hope for. The fact that liberal forces are weak and that young people are joining Islamic State or radical, racist political parties are interconnected. We have failed to give the next generation a liberal legacy of democracy to fight for.We need to make our vision appealing to young people who are fed up with the old establishment.Today, we stand at a crossroads. Liberal moderates must unite. Separate, isolated attempts to deal with this crisis not only will fail, they will also weaken liberal moderates more broadly and give extreme forces a better foothold in public support. Acting alone, leaders who make moral choices pay too heavy a political price. They will ultimately be forced off the stage, leaving it to those to who would rather perform a different, much uglier, play.The author is a member of the Zionist Union and a former foreign minister.