Morocco: Sufism is the magical antidote to Islamism

Islamism is seen as a threat to the government of Morocco both because it invokes violence and destruction and challenges the regime. 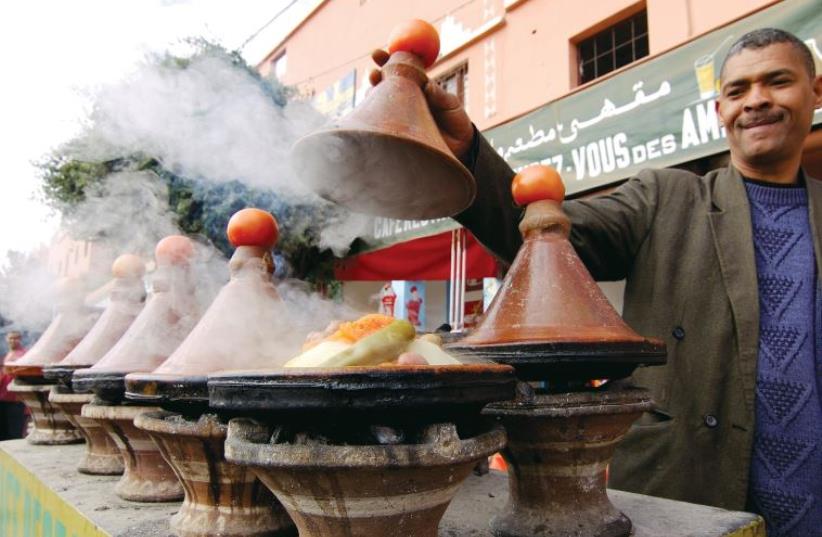 CHICKEN TAJINE is a very popular dish on the streets of Morocco.
(photo credit: Wikimedia Commons)
Advertisement
In Morocco as in other Arab countries, Islamism has taken root in the poverty- stricken areas, in the outskirts of major industrial cities. I n 2003, Casablanca experienced terrorist attacks at a popular tourist restaurant and Internet café. The suicide bombers, from the shantytown of Sidi Moumen, aimed to discourage Western influence by targeting Western tourists. The second attack, which targeted the Internet café, was perhaps more indirect. It could perhaps be seen as a statement against outside influences permeating this North African society by way of the Internet.However, Islamism is seen as a threat to the government of Morocco both because it invokes violence and destruction and challenges the regime. In Morocco specifically, the idea of Islamism is a challenge to the Moroccan king because it casts doubt on his legitimacy as amir al-mu’minin, the “Commander of the Faithful,” or head of religion.The very idea that the marriage between Moroccan politics and Moroccan Islam is insufficient or ill-functioning is both one of the major claims of Islamists and among the most threatening challenges the Moroccan state has experienced. The Islamist opposition to the Moroccan government inadvertently crosses two red lines, challenging both the king’s legitimacy in matters of state and the current role of Islam in politics.As much as Islamism is concerned with permeating all external areas of life, Sufism is focused on the internal workings of each individual. The religion stresses personal enlightenment by encouraging all people to look into themselves in order to find Allah. Sufis are focused on their search for a way inside themselves that will lead them to God, and believe that the path to Him can be found through meditation and purification. Because Sufism is so internally focused, Sufis are seen as inherently apolitical and uninvolved in political affairs. Sufism encourages believers to disengage from the material world, which includes politics and government, in order to better align oneself with the spiritual world and learn the truth, God. Sufism teaches that the material world is all illusion, and that because of its illusive nature it is better to free oneself from the bounds of material life and search for reality and understanding in the Divine.Religion has always been important in the lives of Moroccans throughout history, but it was always moderate and respectful. Jews have lived and thrived in Morocco for 2,000 years, thanks to this moderation. When the Sephardic Jews were kicked out of Spain after the Reconquista in 1492, Morocco was one of the few countries that opened its doors generously for them, and they subsequently dominated the Moroccan economy to the extent that they became the Sultan’s businessmen: tujjar as-sultan. The Jews also dominated Moroccan diplomacy and international trade.Moroccan Islam, though this term is rejected flatly by Islamists, who believe there is only one Islam with no local colorations, is a mixture of Sufism and Maraboutism. The Sufis came from the east around the 15th century and spread around the country, preaching a moderate Islam to uneducated farmers.On their deaths they were elevated to the rank of saints, marabout, and rural people built shrines on their tombs and assigned them baraka “divine grace” attributes and healing powers. So there are hundreds of saints around Morocco with different healing powers and whose baraka is celebrated every year at the end of the agricultural cycle (a pagan concept) by a moussem “festival,” organized by the entire tribe and lasting for days, reminiscent of ancient pagan rites.Since the advent of the Arab Spring in 2011, the establishment, which had always favored Sufi Islam, has further increased its support for religious lodges such as the powerful and popular Boutchichiya lodge based in Berkane, in eastern Morocco, which boasts a membership of two million people in Morocco and worldwide, mainly civil servants, intellectuals and government officials. In Morocco, there are dozens of other Sufi religious lodges and orders that owe allegiance to the monarchy and give it its religious legitimacy and political strength.Realizing,also, that the fragmentation of the religious representation will make the imarat al-mu’minin stronger and more legitimate, the king has recently allowed the presence of Moroccan Shi’ites in the north of Morocco, under strict conditions of allegiance to the monarchy.Morocco has come through the Arab uprisings and the ensuing Islamist power takeover unscathed thanks to the predominance of Sufi Islam, which is almost as old as the monarchy itself, in the majority of Moroccan territory.Moroccan Sufism, represented by omnipresent Maraboutism, is tolerant, open and accepting of the other in his “otherness,” and has earned the country much respect worldwide. Today, many countries are approaching Morocco to benefit from its religious experience, especially in the field of imam training, and as such dozens of foreign students are been registered in the “Imam Academy” of Rabat. Thus, Moroccan Islam couched in Sufism has proven to be a successful antidote against religious extremism in all its forms, and proof of that is that the “Moroccan exception” is a tangible reality in the Muslim world.