From Putin’s perspective, Russia’s involvement in Syria and the cementing of relations with the Assad regime is a key part of a longstanding effort to project power in the Middle East. 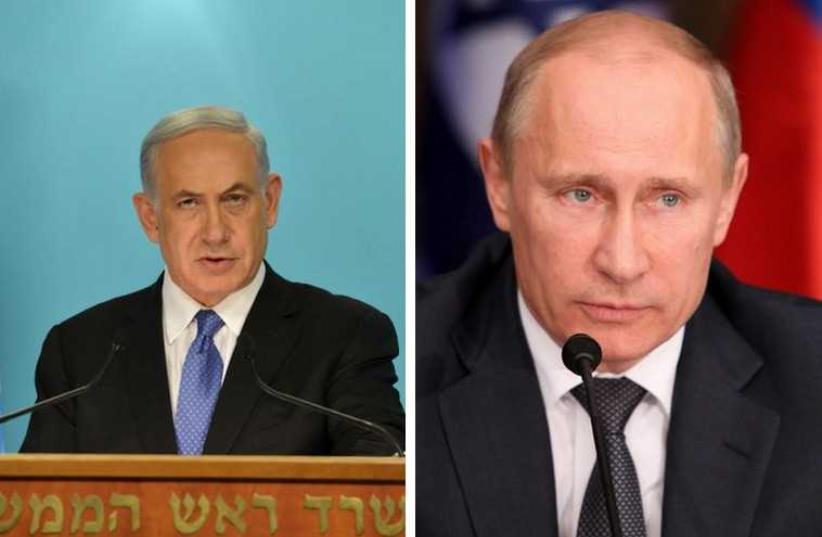 Prime Minister Benjamin Netanyahu and Russian President Vladimir Putin
(photo credit: KOBY GIDEON/GPO,MARC ISRAEL SELLEM/THE JERUSALEM POST)
Advertisement
On Monday, Prime Minister Benjamin Netanyahu is to be in Russia for talks with President Vladimir Putin. The two will discuss Russia’s increasing military involvement in Syria.From Putin’s perspective, Russia’s involvement in Syria and the cementing of relations with the Assad regime is a key part of a longstanding effort to project power in the Middle East. Russia has long maintained a naval base at the coastal city of Tartus. Now the country has built an airfield to complement it.Russia’s involvement in Syria is arguably the most important Russian power projection in the region in decades, according to Stephen J. Blank, an expert on the Russian military at the American Foreign Policy Council.He was quoted by The New York Times as comparing Russia’s Syria deployment to its involvement in Egypt in the 1970s.Russia’s increasing intervention in Syria comes at a time when the Syrian migrant issue has become a major humanitarian crisis and a major challenge first and foremost for the European Union, but also for other countries directly or indirectly affected by the uprooting of millions of Syrians.Putin seems to be positioning himself to take a leading role in formulating a solution for coping with the turmoil in Syria. Even if the Americans and the Europeans would like to isolate Putin for his revanchist designs in Ukraine and his role in strengthening the Assad regime, they will have no choice but to cooperate with him, since any diplomatic or military arrangement aimed at ending the bloodshed in Syria will have to go through Moscow.Since Russia’s military involvement in Syria is so deeply entrenched - indeed it is a central element of Russian foreign policy - there is no reason to believe that Netanyahu, representing little Israel, will be able to convince Putin to reduce that involvement.In fact, Russia’s role in Syria as a supporter of the Assad regime does not necessarily clash with Israeli interests. It might even be a boon to Israel if the Russians can succeed in stabilizing the situation in Syria and weakening the influence of Islamic State and other al-Qaida-affiliated organizations, such as Jabhat al-Nusra.What is of concern to Israel - and Netanyahu will raise this issue during his meeting with Putin - is the perception that Russia’s increased involvement in Syria makes it more difficult for Israel to operate against Hezbollah in Southern Lebanon.As Russia commits increasingly larger resources to propping up the Assad regime against its enemies, the interests of Moscow are increasingly dovetailing with Iran and its proxies.This complicates Israel efforts to protect its own security interests. One of these interests is to prevent the smuggling into Hezbollah-controlled Southern Lebanon of long-range missiles and other advanced arms supplied to Syria by Russia and Iran.Israel’s ability to attack convoys traveling from Syria to Lebanon might be limited, particularly if there is a risk that such attacks might inadvertently hit Russian troops.Moscow might even interpret an Israeli strike on Syrian troops or the Hezbollah as aggression against Russia.At the same time, Israel and Russia share many common interests. First, there is a very large expat community of former Soviet citizens living in Israel. As a result, business ties and cultural ties between the two countries are strong.Russia has also acquired military technology from Israel, especially drones.Israel has agreed to harm relations with smaller countries to remain on good terms with Moscow. Out of deference to Russia, Israel scaled back its arms sales to Georgia, a country that once viewed Israel as a model and an inspiration as a small nation that survived a struggle for statehood in the face of overwhelming hostility from its neighbors.Netanyahu will have to adopt a highly nuanced approach during his meeting with Putin. On one hand he will have to stress Israel’s right to protect its northern border, even if this entails launching pinpoint attacks against arms shipments to Hezbollah. At the same time, he will stress that Russia’s core interest in increasing its influence in Syria does not conflict with Israeli interests. It might even be a welcomed attempt to restore a modicum of stability to a region that has seen too much bloodshed and hardship.