Israelis – from high-ranking officials to taxi drivers, and from Jews to Muslims to Christians – are not shy about expressing their views about the US election. 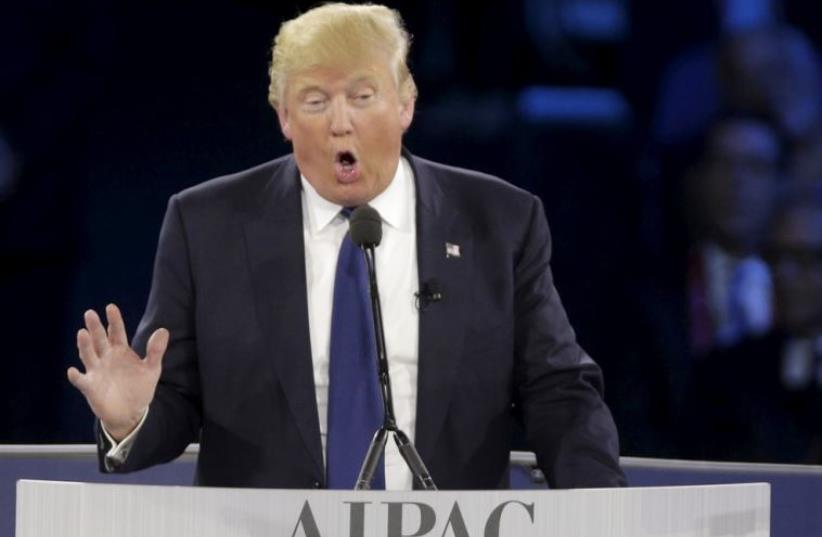 Republican US presidential candidate Donald Trump addresses the American Israel Public Affairs Committee (AIPAC) in Washington
(photo credit: REUTERS)
Advertisement
With the close of the Democratic convention, the media have been under great strain to fill the 24-hour news cycle with updates that satisfy the public’s insatiable desire for information and entertainment. In the case of Israel, I have seen entire articles devoted to speculation – and nothing more than speculation – with regard to which candidate is preferred by the Israeli government.Self-proclaimed experts who have never met Donald Trump or Hillary Clinton, and who barely know the prime minister of Israel, have shown no hesitancy to predict, often with conflicting results, which candidate is more desirable. Quite wisely and properly, the Israeli government has refrained from weighing in on the US election.I have spent the past 10 days in Israel studying its politics, economy and security.Although I have been to Israel at least 30 times over the past 10 years, my particular focus on this trip was to gain insights that might assist me in advising Donald Trump. I learned a lot. And, while I don’t know which candidate Israel officially prefers, I have no doubt whom the Israeli people want to see elected.Israelis – from high-ranking officials to taxi drivers, and from Jews to Muslims to Christians – are not shy about expressing their views about the US election (or any other subject). But they are less interested in the personal attributes of the candidates than they are in their substantive views.While many are aware of Mrs. Clinton’s discomfort with the truth, that does not appear to be a disabling concern. Conversely, while many Israelis appreciate Mr. Trump’s candor and disdain for political correctness, that too does not carry the day. In the end, for Israelis it is all about policy.I found three policy differences that garner the most attention among Israelis: (1) the Palestinian peace process, (2) Iran, and (3) world leadership.As to the Palestinians, Israelis cringe at the efforts by President Obama (a continuation of the practice of secretary Clinton) to pressure Israel into making unilateral concessions. Just this past week, the US State Department blasted Israel for building apartments in Ma’aleh Adumim, leaving many Israelis disheartened by this mean-spirited attack. Ma’aleh Adumim is a beautiful city of more than 40,000 people located on the outskirts of Jerusalem. Even Peace Now, a far-left Israeli organization openly hostile to any Jewish presence in the West Bank, acknowledges that Ma’aleh Adumim will remain part of Israel in any peace accord. The State Department’s hostility to apartment construction in Ma’aleh Adumim continues the knee-jerk reaction initiated under Hillary Clinton’s leadership, which seeks to impede, solely for the sake of an “even-handed” appearance, the natural growth of some of Israel’s most thriving cities (Ma’aleh Adumim has an unemployment rate of just 2 percent). It creates an untenable situation.Donald Trump, as many know, has an altogether different approach. Absent a signed agreement acceptable to all parties, he would not ask Israel to curtail its development of Judea and Samaria. He recognizes how Palestinian hatred, violence and failed leadership pose enormous challenges to any peace deal, and he would not expect or want Israelis to place their lives on hold based upon wishful thinking that the Palestinians will change. Trump knows how much Israelis want peace, and he trusts them to pursue that path as best they can without pressure from the United States.On this policy issue, my sense is that Israelis overwhelmingly support Trump.As to Iran, rarely a day goes by where that rogue state does not either threaten to destroy Israel, advertise its impending nuclear arsenal, or accuse the United States of breaching the very agreement with which Iran has never fully complied. Hillary Clinton supported this agreement and even takes credit for planting its seeds while she was secretary of state. She owns the Iran nuclear deal and will never acknowledge its status as one of America’s great foreign policy failures. Mr. Trump, in contrast, has described the agreement as a disaster which places the entire world at risk. Mr. Trump recognizes that the United States still holds enormous leverage over Iran and he will seek to impose better terms upon this dangerous regime.On this policy issue also, my sense is that Israelis overwhelmingly support Trump.Finally, on the issue of world leadership, there is almost universal recognition that Obama and Clinton have substantially weakened the standing, prestige and authority of the United States in world affairs. Of all the issues relating to the Middle East, this one has my Arab friends most concerned. They fear that continued weakness by the United States will catalyze further expansion of Islamic jihadism – as great a threat to the non-radicalized Muslim world as to Israel and the West. In contrast, Donald Trump has pledged to rebuild the American military, will project strength and reassurance throughout the world, and immediately will declare war on ISIS and its affiliates.Once again, on this policy issue my sense is that Israelis (and especially Israeli Arabs) overwhelmingly support Trump.Comparing the styles, personalities, friends and foes, and perceived character flaws of the candidates makes for great fun and high ratings. And it does matter in evaluating the options. But here in Israel, there is less interest in entertainment, as the election is likely to be more consequential to Israel than to any other nation outside the US. The focus in Israel is on what policies the candidates will implement. It requires serious analysis, and I believe that Israelis are well along in that process. By my observation, Trump’s policies are considered to be far superior and Trump therefore easily comes out on top as the preferred candidate.The writer advises Donald Trump on US-Israel relations.