No holds barred: David Friedman emerges as a symbol of Jewish pride

The prominence the president has given to observant Jews is without precedent in American history. 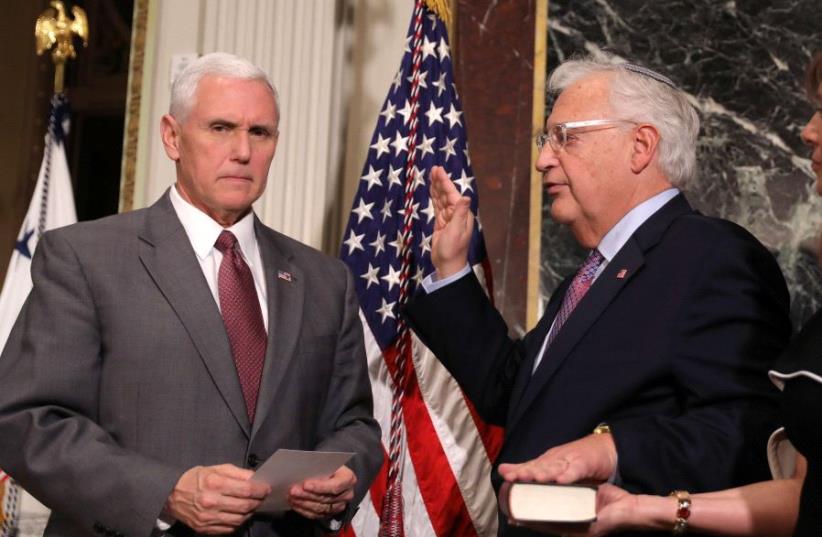 Vice President Mike Pence hosts a swearing in ceremony for US Ambassador to Israel David Friedman (C) at the Executive office in Washington, US, March 29, 2017
(photo credit: REUTERS)
Advertisement
I’ve been to many public and political events in my life, but today was one of the most electrifying. Not because I was privileged to be at the swearing-in ceremony of America’s ambassador to Israel at the White House. And not because I got to be part of a historic moment presided over by the vice president of the United States, one of Israel’s greatest friends.Rather, what I will never forget about the swearing-in of United States Ambassador to Israel David Friedman was how David, an Orthodox Jew, took out his yarmulke, placed it proudly on his head in front of the global media, assembled guests and the vice president of the United States, placed his hands on his Hebrew Bible and took the oath of office. In accordance with the strictures of Jewish law, he did not “swear” but rather “affirmed” the oath administered to him by the vice president.And there it was. In the Indian Treaty Room, one of the most beautiful rooms of the White House compound, the United States had an Orthodox Jewish ambassador to the world’s only Jewish state, a man who celebrates his Jewish observance as making him a greater American.For the past few months, I have watched David Friedman as he has navigated the turbulent waters of public life.I have watched him as he has been viciously attacked by people who know nothing about him. I have watched him in public settings and private surroundings. I have watched him praying Mincha, the afternoon prayer, in his lawyer’s office. I have seen him at his home interacting with his family. I have seen him in conversation with my children. And I saw him on his father’s yahrzeit as he movingly retold stories of his father’s American patriotism and love for Israel.At all times, I have seen a man of extreme warmth and humility, always accessible, always prepared to engage in conversation with those around him as equals, always bestowing dignity and worth on all he met. I have seen him as a loving husband, doting father and adoring grandfather.But above all else, I have seen him as a proud Jew, someone who carries his Jewish identity with solid affirmation.This day was David’s crowning glory. Not because he became the representative of the most powerful man on Earth to one of the world’s most important countries. Rather, because he did so as a God-fearing man who stands tall with his Jewish religious faith, garbed in the destiny of his people.I told David a few weeks ago that I had noticed a disproportionate number of Jewish leaders who were deeply influenced by their parents’ Zionism and commitment to the Jewish people. I did not know David’s father, Rabbi Morris Friedman, who had a community in Woodmere, just outside New York City, and who served as president of the New York Board of Rabbis. But it’s clear from how David speaks about him that he was a giant of Jewish identity who dedicated his life to connecting Jews to their heritage and a love of the eternal Jewish homeland.At his swearing-in ceremony, David spoke movingly of himself and his wife, Tammy, having four parents, “two of whom are no longer of this world.” His father, Rabbi Morris, along with his father-in-law, Julius Sand, whom I knew well from my childhood in Miami Beach, no doubt took immense pride in heaven at David’s thrilling moment.So what now of David’s staunch critics? No doubt, in a short amount of time they will discover how misguided their attacks were. My soul-friend of a quarter century, US Sen. Cory Booker of my home state of New Jersey, was harsh on David at the Senate Foreign Relations Committee hearings and ultimately voted against him, breaking with the Democratic senior senator of New Jersey, Robert Menendez, arguably Israel’s greatest friend in the Senate. I was a little surprised to see that Cory chose to use the teachings of Maimonides on repentance, which I had personally studied with Cory, against David. In telling David that an apology alone is not sufficient penitence, Cory’s words belied the righteous, philanthropic and communally-engaged and family-oriented life that David has always led.And hovering above the swearing-in ceremony was the presence of President Donald Trump, the man falsely and scandalously accused of antisemitism who has now appointed an Orthodox Jew as his ambassador to Israel, and an Orthodox Jew, Jason Greenblatt, as his chief Middle East negotiator, and whose son-in-law and senior adviser, Jared Kushner, is also an Orthodox Jew from a famously observant family. And of course, so is President Trump’s daughter Ivanka.The Trump White House, of course, has its detractors. But the prominence the president has given to observant Jews is without precedent in American history and demonstrates to the American Jewish community, many of whose members are, through no fault of their own, not connected to their roots, that Jewish observance is absolutely consistent with the highest levels of American public service.Rabbi Shmuley Boteach is the international bestselling author of 30 books, including his most recent, The Israel Warrior. Follow him on Twitter @RabbiShmuley.