No holds barred: Purim makes it harder for me to forgive Cory Booker

When hundreds of people at AIPAC asked me why not simply forgive Cory for Iran and resume a friendship that made us indivisible soul-friends, I tell them it’s a lot more complicated than they think. 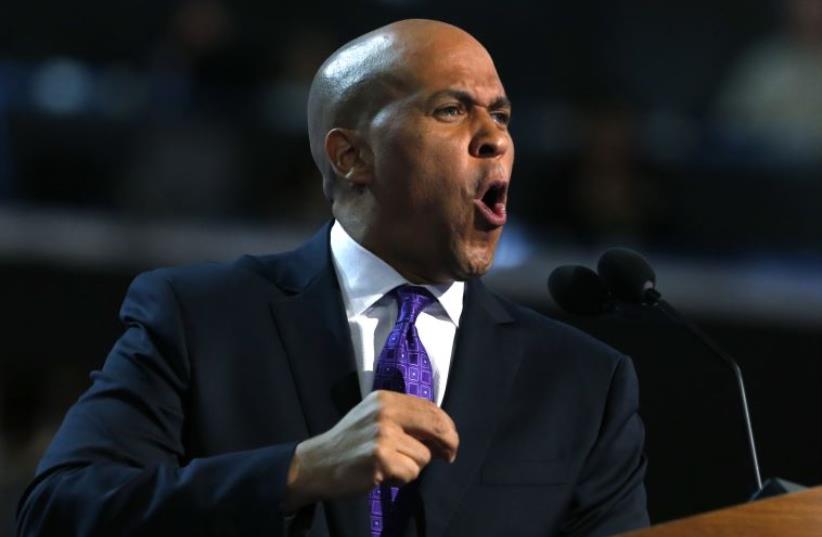 Sen. Cory A. Booker (D-NJ) addresses the Democratic National Convention in Charlotte
(photo credit: REUTERS)
Advertisement
It was a few hours till Purim, I was starving in the last part of the Fast of Esther when someone suddenly sent me an email. It was a video posted on YouTube from the early ’90s showing me on Purim as a rabbi at Oxford University, dressed as a roaring clown, dancing wildly with my closest friend, a young African-American Rhodes scholar named Cory Booker. The video also includes a lecture Cory and I gave in New Jersey nearly 20 years later talking about how much we both loved Purim at the Oxford University L’Chaim Society, which I headed.I watched the video, which quickly went viral. It took me back all those years. And it made me incredibly sad, something you’re not supposed to feel on Purim.At the AIPAC Policy Conference in Washington this week, I could hardly walk 10 feet without someone stopping me and asking, “So what’s going on with you and Cory? Why did he vote for the Iran deal? Couldn’t you have stopped him? And how has it affected your relationship.”By now the answers to many of these questions have been answered already by countless media organizations that have focused on our tense relationship after Iran. There is no point in rehashing it here. But imagine my pain at suddenly getting a video of me and Cory dancing together on Purim.Purim. The festival that celebrates Jewish deliverance from a Persian genocidal murderer who repeatedly threatened to annihilate the Jews.Purim, with its commemoration of a Jewish individual who had access to the powerful and laid everything on the line to make the case of her people so that they would not be murdered.Purim, with its warning of Mordecai to Esther that if she is silent in this time of maximum danger to the Jews, deliverance would come from another quarter and she and her entire household would be lost.Purim, with its story of danger amid ultimate deliverance of the Jews from a crazed Persian genocidal maniac.In the 1990s, Cory and I were two people in their 20s with the most unpredictable friendship imaginable. A Christian African-American Rhodes scholar and the Chabad Hassidic rabbi at Oxford University. Yet that did not stop Cory from becoming our student president or us studying thousands of hours of Torah together over nearly a quarter century. Nor did it stop the American-Jewish community, to whom I introduced Cory when he launched his political career, from falling in love with him and making him the single largest recipient of pro-Israel financial support in the United States. And from the video you can see not only how close Cory and I were but just how attached he was to Judaism, Jewish festivals and Jewish students, amid asserting his Christian belief, which I always faithfully encouraged.Now, two decades later, he and I find ourselves in an increasingly acrimonious relationship over one vital issue: Iran. My closest friend, a US senator, who has enjoyed the friendship and unending support of the American-Jewish community, chose to legitimize a regime that openly calls for a second holocaust without even publicly asserting a caveat, that he would only vote for the Iran nuclear deal if Supreme Leader Khamenei, at the very least, stopped threatening to kill all the Jews.Then came Cory’s memoir, United: Thoughts on Finding Common Ground and Advancing the Common Good, published a few weeks ago, that excised any and all mention of Jewish influences on his development and of Jewish support for his political rise.And what made all this so utterly mystifying is that Sen. Robert Menendez, Cory’s senior colleague from New Jersey in the Senate, distinguished himself in opposition to the Iran deal as the single greatest friend the Jewish people have in the United States Congress.Menendez gave the best policy address at AIPAC, hammering away at the sham of a deal signed by the Obama administration and at Iran’s repeated and serious violations of the agreement. The Menendez speech is a must-watch by anyone interested in the truth of whether the deal should have been supported, and remember as you watch that Menendez is a Democrat.And here Cory and I are, so many years later, except now that calculus has seriously changed.What I did not expect to see in the Purim video of us dancing together was my children, very small at the time, dancing with Cory and the other Oxford students. My son Mendy was a tiny boy at the time. Cory was at the celebrations of his birth. He was at his bris. He watched him grow up. He bounced him on his knee. He told him bedtime stories.Today Mendy is a brave IDF soldier serving in the north of Israel protecting the Jewish state against the Hezbollah terrorists across the border from him. Hezbollah gets nearly all its murderous equipment from Iran. The Iran nuclear deal will enrich these barbarians with more sophisticated and dangerous weapons. Cory voted to give their sponsor, Iran, $150 billion so that they could attempt to kill more Jews. He voted to put my son and countless other IDF soldiers, not to mention millions of Israeli Jewish and Arabs civilians, in harm’s way.So when hundreds of people at AIPAC asked me why not simply forgive Cory for Iran and resume a friendship that made us indivisible soul-friends, I tell them it’s a lot more complicated and painful than they think.In the final analysis, I failed in my Esther mission to Cory. He disregarded my entreaties and that of hundreds of Jewish friends and voted to legitimize a genocidal government sworn to the Jewish people’s annihilation.But at the very least, I did not remain silent. I spoke out. I heeded Mordecai’s words and did all I could to fight for my people.The rest is up to God.Rabbi Shmuley Boteach is the international bestselling author of 30 books. He will shortly publish The Israel Warriors Handbook.