In the ensuing months, my need and willingness to give became, obscurely, almost a selfish act. 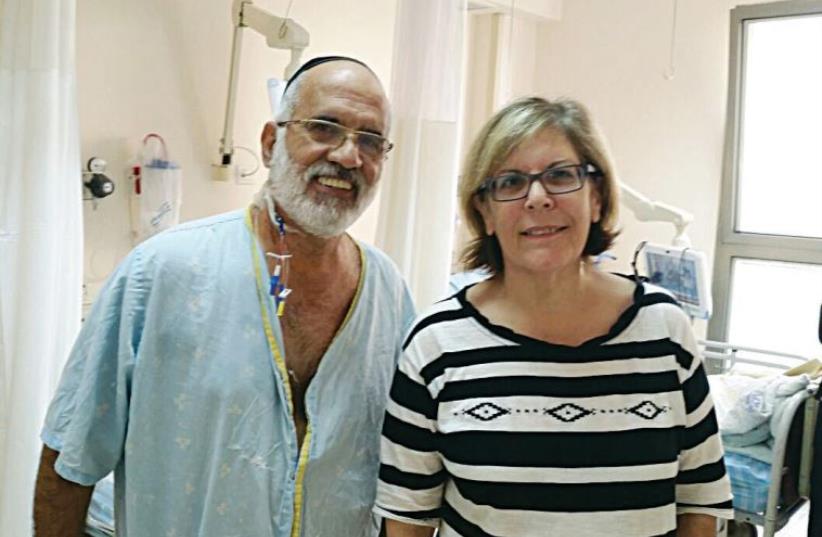 The author and her recipient
(photo credit: Courtesy)
Advertisement
It started with The New York Times.An August 2014 article about Matnat Chaim – an organization that encourages altruistic living organ donation in Israel – caused me to pick up the phone while the words were still flashing on my computer screen.Thus my journey began, culminating three months ago, when my kidney found a new home in a 60-year-old man, a stranger to me until just recently, who had been on dialysis for close to a year.I somehow always knew that I could and would gladly donate a kidney to a friend or family member with no hesitation.But that August I had just turned 59 and I saw the article as a sign – “If not now, when?” The first step was medical tests: ultrasound, blood work, urine analysis. I submitted the results a month or so after the first conversation with Matnat Chaim and then… silence. I tucked the whole matter into a corner of my mind – if they contacted me, great; if not, I had tried.Then, in March, the call – they had found a match, and I was to come to the hospital for a series of meetings the following month. There, the basics of kidney transplantation were explained in a room filled with 20 or 30 people, all of whom I guessed were on either the giving or receiving end. I also met my recipient, Yossi.The encounter was emotional. Yossi turned to me and burst out crying. Before, I had believed that meeting the recipient would be a key element of the process (the face of the life I was saving).Later, it surprisingly turned out to be almost beside the point. In the ensuing months, my need and willingness to give became, obscurely, almost a selfish act. As time passed, I realized I was doing it more for me than for him.That day in the hospital yielded a list of tests that would take months: heart scans, stress tests, colonoscopy, glucose tolerance, and more. Some of the results led to more tests, and some of the tests required checking into the hospital for a few days. By July, the pricking and prodding were behind me. Now I had to meet with social workers, psychologists, and a full committee of top healthcare professionals. One question repeated itself: Why? The answer coalesced over the course of the year into two parts: because I can and because I am grateful.I can, because the battery of tests had shown that I was in excellent health, the discovery of which was an invaluable (my father and mother had died at 60 and 70, respectively). I can, because I have two kidneys and one is a spare part. I can, because I was fully prepared mentally and emotionally, with not a moment of selfdoubt nor one second thought.And I am grateful. I needed to say thanks. My husband Teddy has three children and I have four; together we have 21 beautiful, healthy grandchildren.I had a deep need to express my gratitude to the Almighty who made it all – my health, my family, my life – possible.Ordinarily, I give tzedaka when I feel my cup running over – but, as I approached 60, I was so filled with gratitude that no amount of money (that I had, at least) would do it. The merciful and generous act of donating a kidney was, for me, the appropriate token of appreciation.I went into Beilinson Hospital on a Monday evening and I was home on Friday (Yossi got home a week after I did).Reactions have been mostly very positive, ranging from stupefied to amusing (“I don’t even like to give away my second stapler,” said one befuddled friend) to near-adulatory. I stayed at home, letting Teddy field the good wishes, which was a nice bonus. He loves the attention and he deserves the praise. He’s been by my side, with ongoing, unwavering support.I tended to keep to myself, negotiating the outreach through WhatsApp, my comfort zone.The hardest outpouring to navigate was the gratitude of the recipient’s family. They sent flowers, cooked food, bought chocolates, and wrote heartfelt letters, all of which were more than I needed or wanted, yet – I know – just a drop in the sea of their thankfulness. I didn’t think of “my” kidney in Yossi’s body – only that he was recovering, at home, no longer needing dialysis; a healthier and happier person.For me, recovery was a mixed bag. I was, in the first few weeks, very impatient to feel 100 percent fine, annoyed that I hovered around 95%, and worried that 98% would forever be the new 100%. I’ve shunned carbs for the last five years, but my body craved fuel – heavenly, bread-based comfort food. I unexpectedly felt the nudge of postpartum- like depression and I was thrown back 36 years to when my oldest son was born. This time, however, when I felt my thoughts lick at the edges of a similar (and, I’m told, not unusual) melancholy I could pull away, in an entirely different place. I waited for my life to return to normal. I wanted to travel, work, and cook. I wanted to be able to again pick up my grandchildren, only the youngest of whom – the luminescent five-month-old Aluma – was small enough to fall under the post-op weight limitation.At the six-week mark, I reached the point I was hoping for. I felt that I had completely returned to myself; an amazingly quick recovery, I am told. I haven’t embraced the “kidney donor” label, and I don’t miss the praise and admiration.I do however, continue to feel deeply grateful – for all that I am blessed with, and for the fact that I was able to say, “Thank you.” ■

The author lives in Ginot Shomron.
Advertisement
Subscribe for our daily newsletter