Obama and the Jews

Does the president have an obligation to be careful about what he says out of fear it will be distorted to reinforce that Jewish money and influence are pushing US foreign policy in the Middle East? 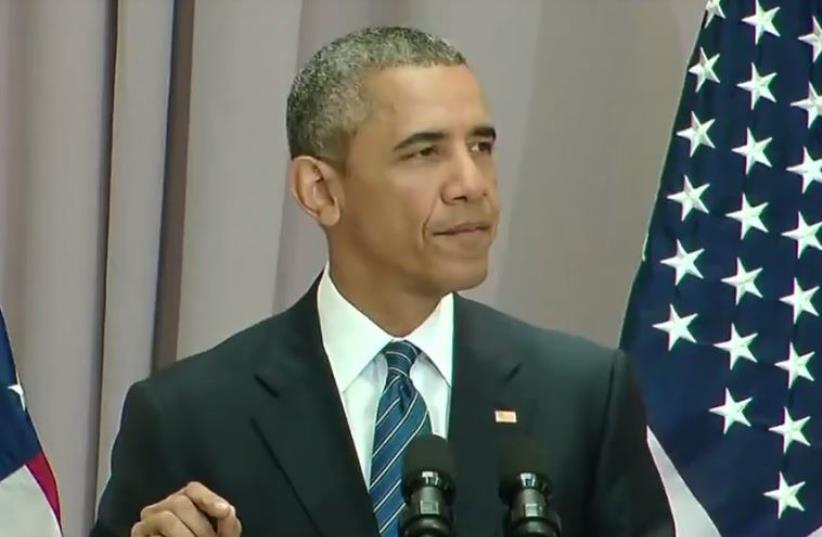 US President Barack Obama speaks at American University
(photo credit: screenshot)
Advertisement
US President Barack Obama is facing a barrage of opposition over the Iran deal much more intense than he probably anticipated. In his desire to sell the deal to Congress and to the American people, he has gone on the offensive and in some speeches attacked his opponents with the same ferocity with which they’ve attacked him.Among the arguments he’s made are that those who oppose the Joint Comprehensive Plan of Action are lobbyists funding a multimillion-dollar advertising effort to oppose the deal, as if only one side in the argument has money. Those opposed to the deal are also portrayed as warmongers, identical to those who were wrong about Iraq. What has been particularly disconcerting is that the lobbyists behind the costly campaign Obama referred to – the warmongers who supported the Iraq war, and the leaders of the only country singled out by the US president as opposed to the agreement – all seem to be members of the same tribe. This has added the ugly specter of anti-Semitism into the mix.An editorial in the Jewish online journal Tablet, op-eds by Elliott Abrams in The Weekly Standard and Bret Stephens in The Wall Street Journal and a tweet by David Frum of The Atlantic all charged Obama with sounding a “dog whistle” to attack Jewish opponents of the deal.American Jewry historian Jonathan Sarna told The Jerusalem Post’s Washington correspondent Michael Wilner that he thinks the US president and some of those around him “have not been as sensitive as they should be to the ease with which a stray comment can give aid and comfort to those who believe in Jewish power, dual loyalty, and a whole variety of other anti-Semitic tropes.”Others have been quick to defend Obama. “Debaters know that when they are losing an argument, a good tactic is to change the subject,” wrote former Conference of Presidents chairman Alan Solow, a close associate of the president, in an op-ed for JTA. “So it goes with the current accusations, completely untethered from reality, that President Obama is resorting to anti-Jewish ‘dog whistles’ in his defense of the nuclear deal with Iran.”The question is whether Jewish leaders in the US should be so quick to trot out the specter of anti-Semitism every time a political dispute heats up. The US, a country not known for a deep-rooted hatred of Jews, has its fair share of anti-Semites, but there’s no doubt that Obama is not one of them.Does the president have an obligation to be especially careful about what he says out of fear it will be distorted to reinforce a canard that Jewish money and influence are pushing US foreign policy in the Middle East? Should he refrain from making comments that can then be exploited by Jew-haters to blame Jews for dual loyalty or warmongering? Answering in the affirmative, as some Jewish leaders seem to be doing, is to argue that Jews have a special status as uniquely vulnerable and therefore worthy of being treated with kid gloves.Politics sometimes gets messy, particularly when much is at stake. In the heat of argument tough words are said and emotions run high. But it is a mistake to argue for special dispensation for Jews. Anti-Semitism exists in America. However, the US president should not be expected to tone down criticism against his opponents out of concern that anti-Semites will misinterpret him. Doing so is to attribute a disproportionate influence to Jew haters.The reality is that American Jews are split over the Iran deal. Polls have shown that Jews support the deal with Iran in greater numbers than the wider American population, because a disproportionate number of American Jews are Democrats. In contrast, the more established Jewish organizations have come out squarely against the deal.But to divert the debate from the agreement by making dubious and vindictive claims of anti-Semitic tendencies coming from the president of the United States does a disservice, not only to Obama and the office he holds, but to American Jews on both sides of the deal.