On My Mind: EU confronts antisemitism 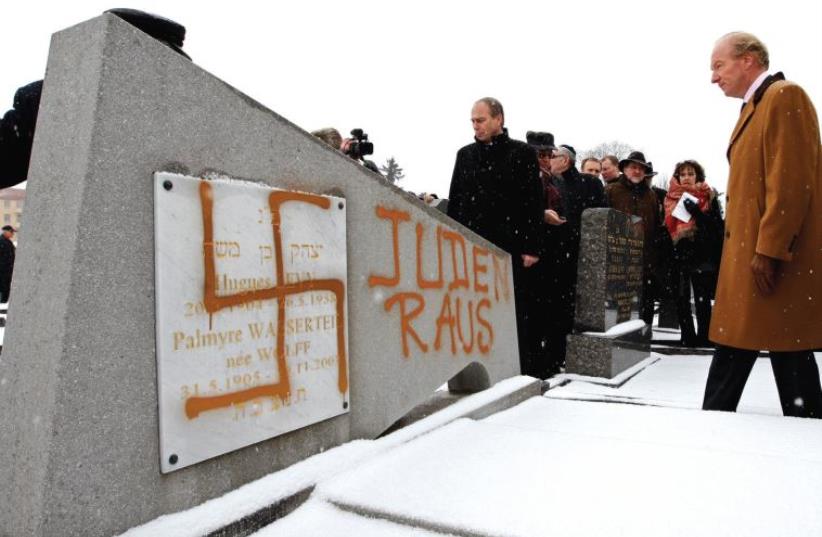 FRANCE’S THEN interior minister Brice Hortefeux walks next to a tombstone desecrated by vandals with a Nazi swastika and the slogan ‘Jews out’ in the Jewish Cemetery of Cronenbourg near Strasbourg in 2010
(photo credit: REUTERS)
Advertisement
In a survey released on the eve of Rosh Hashana, European rabbis and Jewish community leaders anticipated a substantial decrease in synagogue attendance during the High Holy Days. This was not due to some sudden dampening of religious zeal, but rather to fear of antisemitic violence.Such fear, as well as the feeling the authorities could or would not guarantee Jewish security, were revealed three years ago in the EU Fundamental Rights Agency (FRA) survey of Jews in eight European countries.Although FRA called, at the time, for attention to and action about the problem, antisemitic incidents have continued.And in addition to specific Jewish targets in France, Belgium, Denmark, Bulgaria and elsewhere, the perpetrators, mostly adherents of radical Islam, have also targeted the general population.“What we saw with Jews and security of their institutions we now have in front of government buildings in Brussels,” said Katharina von Schnurbein. “What begins with Jews doesn’t end with Jews.”Von Schnurbein is the first European Union (EU) coordinator on combating antisemitism. Creation of the high-level post was announced in October 2015 by European Commission (EC) first vice-president Frans Timmermans at the EC’s first Annual Colloquium on Fundamental Rights. Von Schnurbein’s appointment came in December.Is the EU finally waking up to the severity of the threat antisemitism poses to the societies of its member states? In May 2015, the American Jewish Committee (AJC), the global Jewish advocacy organization, presented a “Call to Action” at a groundbreaking two-day conference on antisemitism in Europe. The event, held in Brussels, was attended by representatives of nearly all EU member states, who declared that fighting antisemitism is a high priority for their governments. Yet, to date only France has appointed a senior official, reporting directly to the prime minister, to combat antisemitism.Von Schnurbein’s appointment makes antisemitism a European regional priority.“One of my aims is to visit lots of Jewish communities, to see how they perceive their situations locally,” von Schnurbein told me during a recent visit to New York.She came to the position with an awareness of and concern about antisemitism from her early childhood in Bavaria.“My parents were the first postwar generation, coming to terms with what happened, with the questions of why it happened,” von Schnurbein said. Her mother studied Hebrew, traveled to Israel, developed many friendships with Israelis, and hosted them in Germany.On the eve of one such visit, a large swastika was painted on the pavement outside the entrance to her family home. Local authorities covered it before the visitors arrived and later replaced that piece of pavement to eliminate any remnant of the Nazi symbol.Since December she has worked with determination to address key institutions where antisemitism breeds and spreads.“Fighting antisemitism is not the task of Jews alone. Fighting antisemitism is a responsibility for society at large,” she said.In May, the EC reached an agreement with Twitter, Facebook, Google and YouTube on a “code of conduct” in which they commit to remove illegal hate speech, including antisemitism, from their platforms within 24 hours after they are notified.“The Internet is no legal black hole, no free haven for hate speech,” Timmermans said at the Inter-Parliamentary Conference for Combating Anti-Semitism (ICCA) in Berlin two months earlier in March. “There is no reason why hate speech cannot be taken down within hours. Not days or weeks.”Securing full cooperation of the technology firms is an ongoing challenge, as the proliferation of antisemitism on Twitter in the US over the past year shows. Monitoring implementation of the code of conduct will be the responsibility of the EC together with NGOs that typically follow websites and social media platforms.This should include Holocaust denial and already there is EU legislation prohibiting such expressions. However, von Schnurbein point outs, individual EU member states need to endorse the legislation. Only 15 of the 28 have done so.Encouraging individual countries to abide by EU policy decisions on combating antisemitism, von Schnurbein acknowledges, is an essential challenge. Education is key.“The only place where people really meet, inevitably, is education,” said Timmermans at the ICCA gathering in March. “We need to use education to make more responsible citizens, who are aware of the threats of bigotry, hatred, and antisemitism.”Von Schnurbein told me education is vital in the fight against antisemitism, but given the decentralized education systems in many European countries, the challenge of developing and using curricula is daunting, yet necessary.“Education must include a holistic view of the history of Jewish life in Europe,” she said. “Teaching the teachers to address their own biases and equip them for teaching about the Holocaust in a multicultural classroom” also is critical.Whether any of these initiatives will allay the concerns of European Jews may be determined in a new FRA survey, to be carried out next year and released in 2018.“We’ve allowed a huge sentiment of loneliness to develop among European Jews,” Timmermans said earlier this year. Von Schnurbein is determined to end that lonely feeling, bolster the fight against antisemitism, and ensure that Jews continue to feel at home wherever they live in Europe.