On Thanksgiving, a Jewish legacy of five kernels of corn

Instead of central heating, her home has a hole in the wall where she burns wood. 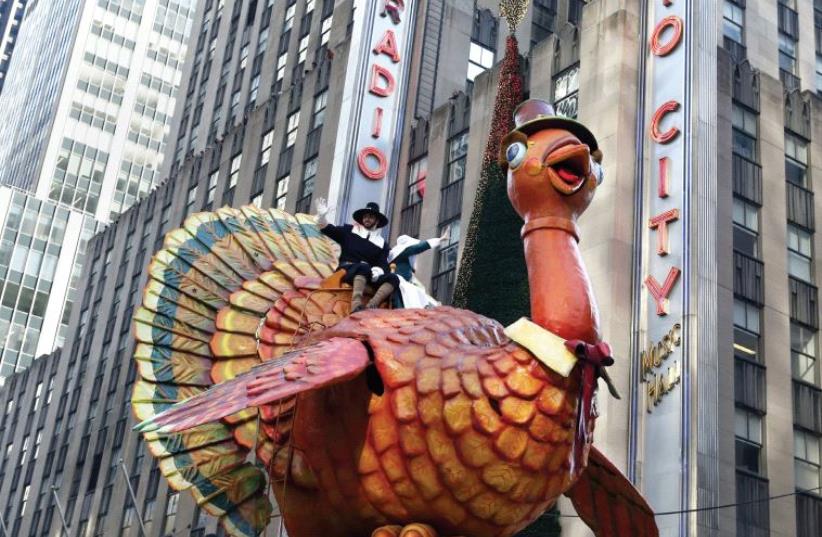 WHAT ARE the Yiddish words for Turkey, football and obscure relatives you rarely get to see?
(photo credit: REUTERS)
Advertisement
The pilgrims, a persecuted religious minority in Europe, came to America to live in freedom.After landing at Plymouth in November of 1620, they endured an unimaginably difficult winter, with a daily ration of five kernels of corn. Fortunately, a successful spring harvest saved them from deprivation.Recognizing how much their lives had improved, the pilgrims celebrated the first Thanksgiving. They were marking two fundamental changes: the journey from oppression to freedom, and from starvation to relative comfort.For the pilgrims, the essence of the holiday was the stark contrast in their lives. The light they found was even more dazzling because of the recent darkness they had endured.This contrast is hard for many Jews, especially in the US, to understand.Fortunately, most of us have never known this sort of suffering. Our religious liberty is sacrosanct. Instead of worrying about having enough calories, we worry about having too many.As the old song says, “you don’t know what you’ve got ‘till it’s gone.” In the same way, “you don’t know what you’ve got if you’ve always had it.”To celebrate Thanksgiving the right way – to have a full appreciation of how fortunate we are – we should do our best to understand what it means to experience oppression and poverty.This is my first Thanksgiving in a new job leading a Jewish humanitarian group. My job offers me constant reminders of the pervasiveness of unfathomable suffering in some parts of the world. One of our main responsibilities is to provide food, medicine, and home care to 110,000 elderly Jews in the former Soviet Union, including 45,000 Holocaust survivors.I’ve had the honor of meeting many of the brave people we help. They live on pensions as low as two dollars per day – the modern equivalent of five kernels of corn. Their stories are heartbreaking and their quiet heroism is inspiring.For example, Abe was six years old when the Germans invaded the Soviet Union in June of 1941. Sensing the danger, which was especially acute for Jews, Abe’s mother saved his life by taking him and his siblings east to Siberia.They left Bobruisk, a small town in Belarus, just two days before the Nazis conquered it.Since his escape was successful, I could not understand why Abe began weeping as he told his story, but then it became clear. Abe’s father did not come with them, since he was serving in the Red Army. In fact, the day after the family left Bobruisk, his father came looking for them, hoping to help them escape.Instead, he found a crater where their home had been. Believing his family was dead, Abe’s father returned to the army and was killed a few days later.For more than 75 years Abe has coped with the knowledge that his father died believing he had failed to save his family. “I will never forget him,” Abe said.Emma lives not far from Abe. Her home used to be a stable. There is no indoor plumbing. This is a particular hardship for Emma, who can barely walk and is being treated for cancer.Instead of central heating, her home has a hole in the wall where she burns wood, which my organization helps her to buy.Although Belarusian winters are cold, her modest supply of wood allows her to burn it for only an hour in the morning and an hour at night.“It is more than some people have,” Emma said.Every time I feel frustrated or disappointed I remind myself of Abe, Emma, and thousands of others who endure unimaginable challenges with equanimity and grace. They withstood the one-two punch of Nazi and Soviet oppression, and made the best of the difficult hands they were dealt.Even though they now live in abject poverty, many are highly educated and once were professionally successful.The dilapidated bookshelves of these retired teachers, doctors, and engineers are lined with Chekov, Tolstoy, engineering treatises, and Red Army medals.In coping with dire poverty, many of these elderly people are alone, a fact worth remembering as we spend time with our families on Thanksgiving.During the 1990s, more than a million Jews left the former Soviet Union for Israel, Western Europe, and the United States. As a result, many of those who remained have no family to care for them, and because their countries have essentially no social safety net, they have nowhere to turn.This is why we and a multi-faith coalition of partners – including the Claims Conference, the International Fellowship of Christians and Jews, Jewish federations, and thousands of others – are spending over $100 million this year on food, medicine, and homecare for these elderly people.One of privileges of my job is that I am constantly reminded of how fortunate I am. This sort of reminder is easy for others to find as well. We can volunteer our time to help people in need. We can spend a little less on our turkey dinner and donate the balance to a worthwhile cause. We can even travel to places in the world where every meal is a reason for Thanksgiving and we can do what we can to improve conditions there.In short, let’s be thankful for the many good things we have and for the opportunity to help people who have much less. This is the essence of Thanksgiving, a holiday of lives transformed even at the brink of despair.The writer is the CEO of the American Jewish Joint Distribution Committee.