Conditions for a long-term cease-fire

It is difficult to move toward a cease-fire agreement that will surely need external guarantors such as Egypt, the Palestinian government and possibly Turkey, Qatar and even the US if previously guaranteed agreements are not respected. 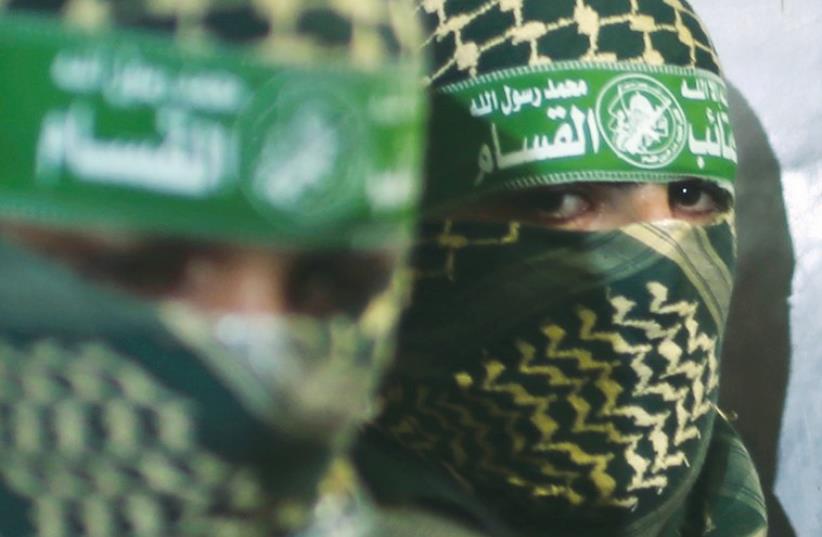 Hamas members are seen close up during a press conference in the Gaza Strip last week.
(photo credit: REUTERS)
Advertisement
In violent conflicts, parties to the conflict are always under pressure to agree to a cease-fire.Cease-fire agreements tend to have different formats, but there are two basic requirements that all successful long-term cease-fires require.The first is clear: a total cessation of all attacks using all forms of weapons. But most people don’t realize that the most important part of an effective cease-fire agreement is usually the second part. Namely, the political conditions that are being offered to buttress and cement the cessation of hostilities.When both parties simply cease hostilities, it usually doesn’t hold for very long. There is always an element, usually political or logistic, that was the cause of hostilities and which the parties are adamant to try and address in order to justify to their own people why they participated in the violence in the first place.Applying this theory to the current Israeli war on Gaza it is clear that the Israeli idea of mutual tahdiya (calm) is not a formula that will last very long.THE PALESTINIAN side feels that it was wrongly accused of being behind the kidnapping of three Israelis in areas under Israel’s control in the West Bank. It, along with the entire population of Gaza and the rest of the world, also feels that the illegal seven-year land-and-sea siege of Gaza must come to an end.One possible way out of the current situation is to involve the Ramallah-based Palestinian Authority, which has, at least on the civilian side, a legal and authoritative role to play in the lives of Palestinians in Gaza. The unity government has ended the period of two governing bodies in the West Bank and Gaza. All Palestinians in the occupied territories today have a single civilian governing leadership, namely the government headed by Rami Hamdallah.This government can, and should be allowed to quickly implement the 2005 border agreements in which Palestinian security officials from the presidential guard along with European observers will man the two crossing points out of Gaza and ensure that movement of people and goods is carried out in an orderly manner and with all the necessary security arrangements.This issue is touched on lightly in the Egyptian- sponsored cease-fire agreement which was hastily prepared and made public before any Palestinian had a chance to review it.Palestinians, including Hamas, are also anxious to reverse some of the Israeli actions carried out in the West Bank following the disappearance (and later confirmed deaths) of the three Israelis.It is difficult to move toward a cease-fire agreement that will surely need external guarantors such as Egypt, the Palestinian government and possibly Turkey, Qatar and even the US if previously guaranteed agreements are not respected.The October 2011 prisoner exchange that included the release of Israeli soldier Gilad Schalit and Palestinian prisoners was guaranteed by the Egyptian government on the condition that the released Palestinian prisoners would not be re-arrested so long as they were not carrying out any actions against Israel.However, in the aftermath of the kidnapping of the three Israelis, tens of Palestinians released under that exchange were taken from their homes and are in administrative detention (no charge or trial) without any claim that they were arrested for carrying out any action against Israel.Just like prisoners are released in most ceasefire agreements, it would make perfect sense to release the nearly 1,000 Palestinian prisoners that include elected members of the Palestinian legislature and prisoners released in the Schalit exchange as part of the cease-fire agreement.Without such a move, it would be foolish for countries to once again guarantee an agreement to which they can’t obtain the adherence by one side.Lifting the siege of Gaza in an orderly way that prevents the entry of any military supplies and the release of prisoners snatched after the kidnapping of the three Israelis are likely to encourage the widest public support to such an agreement and will encourage influential parties to ensure that the cessation of violence is permanent.While some of the above-mentioned issues are necessary to move from a state of violence to a cease-fire, the root causes of the conflict will naturally require a much more serious and in-depth look at the overall picture of the long-term relationship between Israel and Palestine.The recent months have shown that the relative calm that Israel has enjoyed for the past few years was artificial and that the end of the occupation and the creation of an independent state in Palestine is absolutely necessary for Israelis and Palestinians to move, not only from violence to cease-fire, but to a phase of natural neighborly relations.The writer is a prominent Palestinian journalist; the article is based on one he wrote for The Jordan Times.