Out There: A just and fair distribution of chores

I would estimate that about 95 percent of all arguments revolved around the distribution of chores. 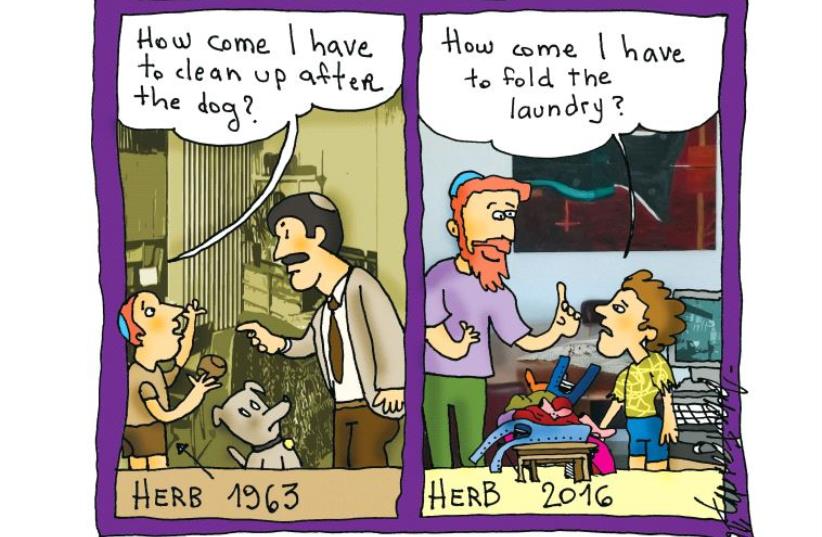 Art by Pepe Fainberg
(photo credit: PEPE FAINBERG)
Advertisement
Chores are an integral, inescapable part of daily living.Beds gotta get made, clothes gotta get cleaned, food’s gotta get bought, vegetables gotta get cut up, floors gotta get swept, cars gotta be maintained.And even in this futuristic age of computers, robots and really nifty apps, somebody – some flesh-and-blood person – still has to do all that stuff.If I go back to the very beginning and add up all the arguments I have had over all my years with the most important people in my life – my parents, my sister, The Wife and my kids – I would estimate that about 95 percent of them revolved around the distribution of chores. Another 4% dealt with when to come home at night, and 1% with everything else.“How come I have to mow the lawn?”“How come I have to clean up after the dog?” “How come I have to take out the Passover dishes?”“How come I have to fold the laundry?”“How come I have to peel the potatoes?” It’s the same basic argument, only the person I have been arguing with – and the weight given to what I say – has changed over the years.My success rate in winning those arguments has increased over time, not because my reasoning has become more persuasive, but, rather, because my standing in the family hierarchy has changed over the years: Just as I had to listen to my folks, my kids – to a certain degree – have to listen to me.“Happy wife, happy life” goes a saying some readers may take umbrage to because it reeks of a certain 1950s sexist odor. I have problems with that saying for another reason: because it places responsibility for one’s happiness on someone else. Either way, I would alter it thus: “Fair, equitable and just distribution of domestic chores, happy life.”But what exactly is a fair, equitable and just distribution of domestic chores? Therein lies the magic formula to home-life tranquility.THIS ISSUE came to the fore recently in our household when my youngest son went into the army. Until now the family’s policy was that the children get a blanket exemption from household chores while doing national service. That means that when they come home for Shabbat, after a weary week or two in the field, someone else will cut the salad, set the table and clear the dishes.It’s one of the hidden benefits my sons get out of their IDF service. Sure, they crawl through thorns, get pummeled in Krav Maga sessions and generally risk life and limb to protect the Jewish state, but at least when they come home they don’t have to take out the garbage.The mobilization of The Youngest, however, placed us in a quandary for two reasons.First, we already have a son in the army, and taking another child off chore duty leaves us shorthanded (one would think we live on a vast dairy farm, not in a four-and-a-halfroom suburban apartment).Second, because The Youngest is a great chore doer. He kvetches about it less than anyone else in the household, myself included, and also does the chores really well. When he washes dishes, you can actually use them afterward; he fries a great schnitzel; and the barefoot feet rejoice after walking on a floor that he has mopped.BUT STILL, a household rule is a household rule. Which means that The Wife and I, and the two older kids not actively serving their country, must come to a new modus vivendi.Who does what? Who picks up the chores previously carried out by the two younger lads? And that has led to some deep philosophical discussions about the very nature of chores.What is a chore? What can fairly be defined as a chore? If you actually like doing a chore, can your time spent engaged in that activity be deducted from your overall chore obligations? For instance, I’ve got a little garden out on the back balcony. Not much: a couple of petunias, a few pansies, a small bougainvillea, some roses and nana. To give you an idea of the scope of the garden, when Succot comes around, I move all the flowers to a downstairs neighbor’s lawn so I can build a succa on the porch (yet another chore).But still, even a few petunias need tending to, and in this heat they need tending to a lot. So I do it. Every day I schlep buckets of water out to the balcony to water the garden by hand, the old-fashioned way.“No, you sit, I got it,” I’ll say to whichever kid is sitting on the couch in the living room at the time, watching their aging father plod by carrying heavy buckets of water, and showing no inclination whatsoever to lend a hand.And, though I kind of hate to admit it, I actually enjoy it.I enjoy making them feel guilty sitting there, and I enjoy taking care of the garden.But, as a result, does this count as a chore? Should my time in the garden be deducted on Friday afternoon from time everyone owes for household work? I, of course, argue that it should. I’m outnumbered. But, as I said earlier, my arguments now carry more weight than they once did.And when the kids complain that this is neither just nor fair, I remind them that their day will come. One day they, too, will have children. One day they, too, will earn certain chore prerogatives. And one day – over that vast expanse of Keinon family history – everything will even out in the end.One day. But not yet.A collection of the writer’s “Out There” columns, French Fries in Pita, is available at www.herbkeinon.com and www.amazon.com