Out There: ‘Hobbling on the highway, hidin’ from adventure’ 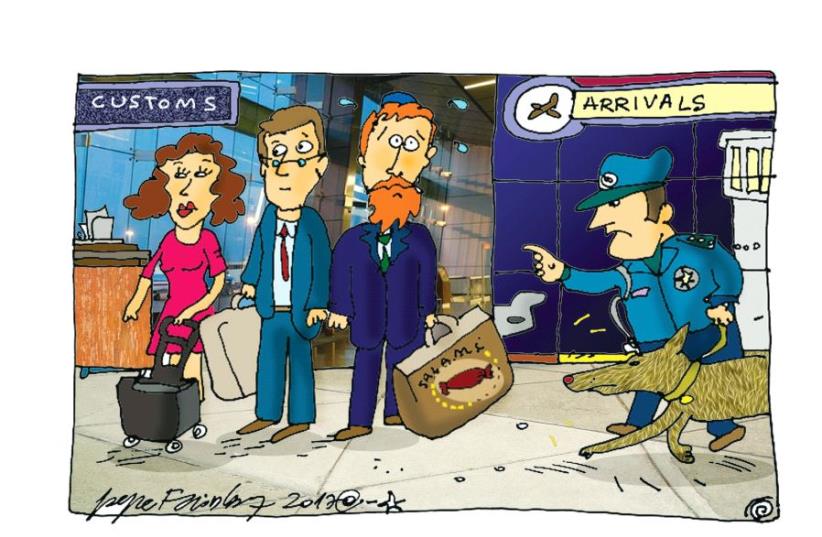 Painting by Pepe Fainberg
(photo credit: PEPE FAINBERG)
Advertisement
Many are the signs of getting up there in years.Marrying off kids is one of them. Finding yourself talking with friends about various medical conditions is another. Going on an organized tour abroad is a third.I always knew that someday my kids would start getting married, and I also figured that at a certain point in life, conversations with friends would shift from sports and politics to backaches and cataracts. But I never imagined myself as one of those folks going abroad together with 50 strangers.However, following a weeklong vacation The Wife and I took last week to Lapland in northern Finland, I can now check off that final box as well. Yup, my kids are right, I am getting old.The thought of traveling abroad with an organized tour never really spoke to me before. Traveling always meant the open road, adventure, independence; not having a preset itinerary where all the decisions regarding where to go, what to do and what to eat are made by somebody else.That was then – the heady, devil-maycare days of youth. But now? Now, the thought that there is a preset itinerary where all the decisions regarding where to go, what to do and what to eat will be made by somebody else is not a disadvantage – not a minus – but rather a huge plus.Especially the food part.I love traveling: seeing new places, rubbing up against different cultures, walking the streets of foreign cities. But what is significantly less thrilling is having to worry about kosher food.I’ve had the good fortune over the years to have traveled quite a bit abroad, both alone and with the family. And as exciting as these trips are, the food issue can at times be a drag.Like that time on a family trip to Prague, when a local customs official happened upon that one piece of luggage containing a week’s worth of food for our family of six. He opened it and confiscated a good share, including some cooked brisket we had prepared for Shabbat. I stared in disbelief as The Wife surreptitiously retrieved the brisket when the customs man momentarily looked the other way. Images of my beloved being hauled into a Czech jail flashed before my eyes.“Are you crazy?” I barked at her after her deed went undetected and we exited the airport. “What were you thinking?” “That if we didn’t get the brisket back, we’d starve for Shabbat,” she replied.Another time, on an overnight boat trip in the Norwegian fjords, I was petrified we’d be kicked off the boat after steam from the soup we were cooking on our portable burner set off a smoke alarm in our no-smoking cabin.Just last month, accompanying the prime minister to Australia, I stood on the tarmac at the Sydney airport praying that specially trained dogs sniffing our bags laid out in a neat row would not stop at mine, and that the salami inside – which was to be my main food staple for a week – would not be seized.Thinking about what food to shlep on trips abroad; shlepping that food, along with pots, pans and a portable burner; and then actually having to cook it all while on “vacation” has a tendency to take some of that carefree, happy-go-lucky joy out of travel.The Wife is the one who pushed the Lapland idea: both the destination, and the idea of going on an organized tour.It’s not easy picking a travel destination with The Wife, because one of her criteria is how that country treated Jews in the past, and treats Israel today.I say London, and she comes back at me with the White Paper. I say Lisbon, and she reminds me the Portuguese were worse than the Spaniards during the Inquisition. I suggest Vienna, and she just laughs.That criterion puts a good part of the world out of bounds. Essentially, it means we can go to America, Canada, Australia and Bulgaria. Finland got a pass because its record toward Israel and the Jews has been relatively benign.The Wife also pushed the organized tour part because it’s just so much easier – and not only the food aspect.If you go on an organized tour you don’t have to do weeks of research about what hotel to stay at, and then wonder afterward whether you got the very best deal. You don’t have to burn hours on the Internet trying to figure out the must-sees in each location. And you don’t have to be chintzy on the attractions you go to, worrying about how much everything will cost individually, because it is all thrown into one discount package. All you have to do is figure out where you want to go, pay the money, and go. Someone else figures out all the rest for you.I did have one concern, however: getting stuck with a group of people I didn’t like. But, as I explained to my kids, it’s better to go to the Arctic Circle and eat well with folks who might annoy you, than to go alone with the one you love but have to worry the entire time about your next meal.“Boy, that’s a romantic sentiment,” my newly married son replied, rolling his eyes. No, neither romantic nor poetic; yet honest and pragmatic. Another telltale sign of getting on in years.