Out There: Marrying the holy and the mundane

Standing under the huppa with my boy, I was flooded with thoughts. 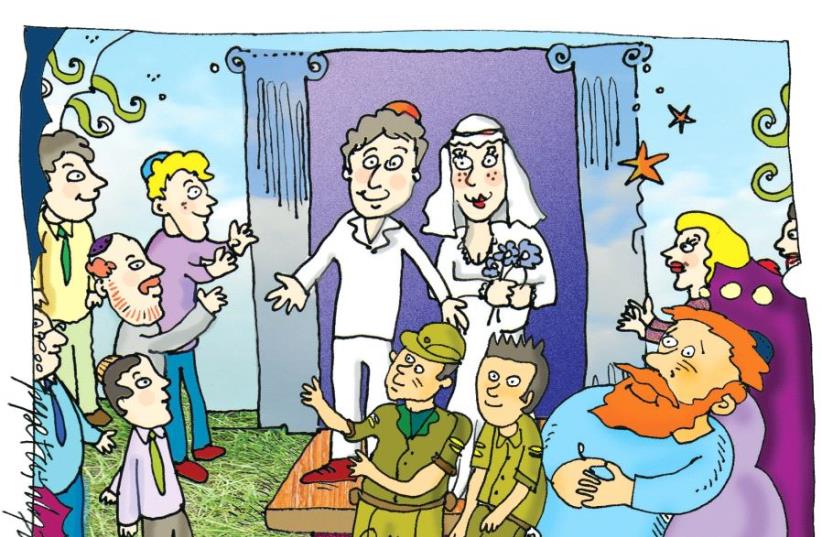 Art by Pepe Fainberg
(photo credit: PEPE FAINBERG)
Advertisement
It all went so fast.That, at least, is what went through my mind last Friday, as The Wife and I drove up north to the rented, two-room apartment of our newly married son, Skippy, and his wife.The married reality of my son finally hit me when I saw his new apartment, beginning with the Hebrew name plaque on the door reading “Keinon” – designating a household in Israel other than my own – and culminating in seeing him and his new wife inside their own domain.The newlyweds’ apartment is a spacious two rooms: a large bedroom and a large kitchen/living room. Two rooms. Overnight he went from the top of a bunk bed and two closet shelves in a cramped room he shared with his younger brother in our home, to a two-room apartment of his own.We didn’t lose a son, I told The Wife after the wedding, we gained two shelves. And he, from his perspective, gained both a queen and a palace.And it all happened so fast. Everything. The wedding, the engagement, the courtship, the 23 years he was under our roof.The trick, as the wedding itself brought home to me, is to control the mind. Focus on the good, the significant, the important. Don’t follow after the mind to the insignificant and the petty. The mind is not always your friend. The trick is to rein it in, direct it to where you want it to go, not where it wants to lead you.That’s a great idea, but of course much easier said than done.Standing under the huppa with my boy, I was flooded with thoughts. Some of them mundane – concern that the groom should not spill red wine on his bride’s wedding dress; annoyance that the ceremony under the wedding canopy started an hour late because the rabbi didn’t come on time; befuddlement that I found myself standing under the huppa next to my son on one side and his father in-law on the other, not next to The Wife.Other thoughts were more significant – wonder at seeing a tenderness in my son’s face I had never seen before; gratitude that my entire family – including my father, my sister, brothers-in-law, nieces, nephews and all their children – made the trip from America for the occasion; and enormous pride at the drama of Jewish resilience and continuity being played out.At the risk of sounding like a Nefesh B’Nefesh brochure, there was something extremely powerful in watching Skippy’s friends – many of them from his army unit, both religious and secular – dance with joyous abandon and intensity at his wedding. I couldn’t help but think of my late mother, a Holocaust survivor whose grandson was starting a family in a Jewish state, surrounded at his wedding by his confident, unapologetic brothers-in-arms. Had her parents, who were killed in the Lodz Ghetto, been told back then that this was what the future would hold, they would never have believed it.Never had I experienced a situation where heavy thoughts intermingled so constantly and seamlessly with light, frivolous ones. For instance, one moment I’m thinking about Jewish continuity, the Holocaust and the rebirth of the State of Israel, and the very next I’m wondering how come the hors d’oeuvres stands did not open precisely at 7 p.m., as the wedding-hall contract stipulated.Likewise, the thoughts of my family, some of whom were attending their first Israeli wedding, were not always deep, penetrating and profound.Of all the various elements at the wedding – the marriage of Ashkenazi and Sephardi cultures (the bride is of Moroccan, Algerian and French descent), the soldiers dancing, the food – the one thing that stuck out for one of my nephews, a rabbi from Lakewood, was Skippy’s shirttails.“He couldn’t have tucked in his shirt,” he said, chuckling in an affectionate manner.“Are you kidding?” I replied. “I’m just happy he agreed to wear a button-down shirt.”Well, at least he wore that shirt part of the time. Midway through the first round of dancing, Skippy doffed his button-down white shirt with a normal collar, and donned a white T-shirt with an inscription his army unit had made especially for the occasion. The wedding pictures will show the bride dancing on one side of the hall with her friends in a wedding dress that cost thousands of shekels just to rent, and Skippy celebrating on the other in a NIS 30 T-shirt.Another relative was struck that the bar served more espresso than whiskey, and yet another noted the lack of solemnity of the whole affair.Indeed, there were no flower girls, no bridesmaids, no best men, no cantorial flourishes, no strewn rose petals, no elaborate walks down the aisle with everyone sitting and watching in somber silence. No, at this wedding, as is the local custom, half the crowd was mingling, laughing and talking while the wedding contract was being read and the ancient blessings recited.It was a fusion of the light and the heavy, the holy and mundane: just like what was going on in my mind.