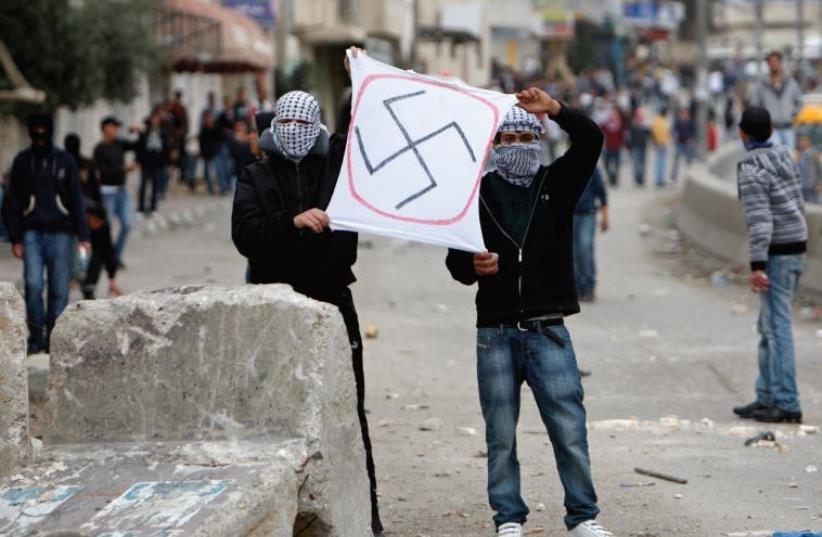 Palestinians hold a sign depicting a swastika during clashes at Qalandiya checkpoint near the West Bank city of Ramallah in 2010.
(photo credit: REUTERS)
Advertisement
Can we agree that the politically motivated murder of civilians enjoying a night out is terrorism? That’s the global consensus regarding the Orlando massacre and the Paris slaughter last fall, among other instances. Yet, two Palestinian terrorists murdering diners in Tel Aviv’s Sarona Market receives different treatment. The New York Times overlooked Tel Aviv and Jerusalem when writing: “Orlando now takes a place with Paris, Brussels, Beirut, Bamako, San Bernardino and other cities struck by different incarnations of terrorism.” Even more outrageous, the weekend Orlando murders occurred, a despicable Politico article was titled: “How Israel is inciting Palestinian violence.”Overlooking terrorism against Israel resurrects Shakespeare’s question for Jews: “if you prick us do we not bleed?” Why is our suffering invisible? Blaming Israel for being targeted by terrorists turns Shakespearean tragedy into Orwellian perversity. How are Palestinians guilty of brutal terrorism absolved, leaving their victims, slaughtered while wining or dining or commuting or schmoozing, guilty of DWI – Dining While Israeli (or With Israelis)? I wonder, as an occasional Politico contributor, whether my esteemed editors would ever run a piece titled, “How the US is inciting ISIS violence” justifying Islamist murders of Americans by detailing American drone warfare.Yes, there are triggers to events, even to lunatics’ actions. But the civilized world has justifiably walled off terrorism, saying, “no matter your motivation, targeting civilians in a peaceful setting to express grievances is evil” – and generalizing to hold a group accountable in that way is perverse – unless, it seems, Jews are targeted.Today’s PTA – Palestinian Terror Appeasers – forget that, as the Israeli philosopher Benjamin Ish-Shalom notes, humans are moral beings. Choosing, managing dilemmas, rather than simply reacting instinctively, distinguishes people from beasts. All political violence, therefore, from the most just war to the most unjust terrorism, results from people’s decisions. Human actions are optional, not instinctual, meaning Israelis cannot “make” Palestinians do anything; they make their own decisions.Humans’ favorite text is “context”: personal, historical, ideological, environmental forces shape our moral decisions, making few outcomes inevitable. Explaining motives does not require justifying evil. Quentin Tarantino’s movie Inglorious Basterds was morally reprehensible because he depicted Jews during the Holocaust engaging in terrorism. History teaches that even under Hitler’s evil, Jews didn’t terrorize German civilians.Because terrorism is a choice, the terrorist must first dehumanize the “target.” Such dehumanization requires a political expression of Occam’s Razor, believing that the simplest explanation is the most compelling.Yet in most political conflicts, Troy’s Hatchet should crush Occam’s Razor: the simplest explanation may seem the most compelling but the more complicated one usually is more accurate. Acknowledging complexity invites combatants to see the other side, even if just partially, avoiding the fanaticism and absolutism terrorism requires.In his 1954 classic The Nature of Prejudice, the Harvard social psychologist Gordon Allport showed how bias ballooned and turned ever uglier. Studying how prejudice against blacks grew, from “verbal violence” to lynching, Allport tracked five stages: from Antilocution – talking – to Avoidance – snubbing – to Discrimination – shunning – to Physical Attack – wounding – to Extermination – killing.As the pioneers of modern terrorism, Palestinians prove that terrorism results from dehumanization – and is fed by it, evidenced by Palestinians’ constant anti-Zionist incitement.Terrorism’s opponents should delegitimize Palestinian terrorism not excuse it, especially because it spurs Islamist terrorism.Palestinian terrorism has destroyed thousands of innocent lives. It has made a Palestinian state harder to achieve by mocking Israel’s peaceniks, proving that too many Palestinians prefer trying to destroy the Jewish state to building their own. Yet the world’s indulgence misleads Palestinians and others into believing that terrorism works.Apologists for Palestinian bloodthirstiness in governments, the UN, the media, have implicitly accepted Palestinians’ notion of unjust war – that despicable violence occasionally can be justified, even against civilians, at least when targeting Jews. That the Palestinians continue to be coddled by others who blame Israelis for being shot or bombed encourages global terrorism.In 1799, the Spanish artist Francisco Goya etched The Sleep of Reason Produces Monsters.How true. Reason sleeps today by absolving Palestinian murderers of moral responsibility; by ignoring Koranic verses such as 2:191 demanding believers “kill” the non-Muslims “wherever you find them” which inspire Islamists; by exaggerating Israeli sins assuming that because Palestinians commit such grotesque crimes they must be spurred by equally grotesque Israeli actions. Reason sleeps by accepting Palestinian maximalist demands, denying Israel’s historic connection to the West Bank because most Palestinians refuse to compromise and most Israelis are willing to. Reason sleeps by blaming Israel as victimizer even when Israelis are victims.And this sleep of reason has produced monsters. Enabling Palestinian terrorism encouraged the Islamist terrorism epidemic.Excusing mass murder in Tel Aviv and Jerusalem begat the World Trade Center, the London Tube, Madrid, Paris, Orlando.The British pioneered limits on leaders.Americans invented mass democracy. Palestinians introduced today’s terrorism. What a national disgrace. It’s time to show respect for Palestinians and self-respect for everyone else by holding Palestinians accountable for terrorism. Terrorism and appeasement are contagious. Excusing Palestinian terrorism excuses terrorism everywhere – even though all terrorism is inexcusable.The author, professor of history at McGill University, is the author of The Age of Clinton: America in the 1990s, published by St. Martin’s Press. His next book will update Arthur Hertzberg’s The Zionist Idea. Follow on Twitter @ GilTroy.