"Even here, in Egypt, we plan to preserve our traditions and bequeath them to our sons and daughters and grandchildren." 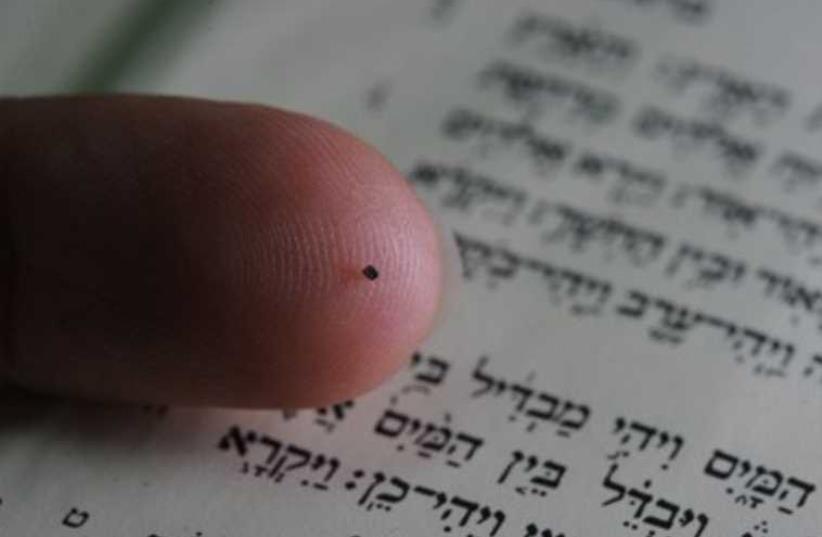 “Nano Bible,” the world’s smallest bible
(photo credit: TECHNION)
Advertisement
In this week’s Torah portion, we read about one of more significant stages in the history of the Jewish nation. Jacob and his family left the Land of Canaan for Egypt. The family – which becomes a nation while in Egypt – will stay in Egypt for 210 years until the Exodus from Egypt (“Yetziat Mitzrayim”) which we will read about in the Book of Numbers.To properly examine what happens when they reach Egypt, we must first recall what Jacob has been going through over the prior 22 years.Twenty-two years earlier, when Joseph was a boy of 17, his brothers sold him into slavery. The brothers did not tell their father, Jacob, what they had done, but rather led him to believe that Joseph was killed by an animal while fulfilling his father’s mission: “And they took Joseph’s coat, and they slaughtered a kid, and they dipped the coat in the blood. And they sent the fine woolen coat, and they brought [it] to their father, and they said, ‘We have found this; now recognize whether it is your son’s coat or not.’ He recognized it, and he said, ‘[It is] my son’s coat; a wild beast has devoured him; Joseph has surely been torn up.’” (Gen. 37:31-33) Jacob’s response after believing he had lost his beloved son is deep mourning: “And Jacob rent his garments, and he put sackcloth on his loins, and he mourned for his son many days...and he refused to be consoled.” (Gen. 37:34-35) There is a noticeable gap here between the reader and Jacob. The reader knows that Joseph was not killed and therefore does not share Jacob’s sorrow. But Jacob is sincerely mourning. He is overwhelmed by deep sadness and cannot recover.For 22 years, Jacob mourned his beloved son until he was told the best news a bereaved father could wish for: Joseph is still alive! (Gen. 45:26) Jacob’s next step is predictable: He goes down to Egypt to meet his lost son. We can only imagine the depth of emotion felt by Jacob and Joseph upon meeting again after 22 years of mourning. If Jacob had only one happy day in his life, it would be the one when he was reconnected with his son Joseph.But when we read about this meeting in the Torah, the description is a bit odd: “And Joseph harnessed his chariot, and he went up to meet Israel [Jacob] his father... and he fell on his neck, and he wept on his neck for a long time.” (Gen. 46:29) Joseph falls on his father’s neck and cries, a natural reaction after such a long, coerced separation. And Jacob? Why doesn’t he fall on his son’s neck? Why doesn’t he cry? The great commentator, Rashi (Rabbi Shlomo Yitzhaki, France, 11th century) quotes the words of the Midrash for this verse: “Our sages said that he [Jacob] was reciting the Shma [prayer].”At the most moving moment of his life, Jacob recites the eternal Jewish declaration: “Shma Yisrael – Hear, O Israel, the Lord is our God, the Lord is One.” Why? And even if reciting the Shma was so important to Jacob, couldn’t he wait until he finished embracing his son? The answer to this is in understanding the risk Jacob takes upon himself and his family when he goes down to Egypt. From the time that Abraham reached the Land of Canaan, he worked hard to establish his family; the focus of which was faith in God and the battle against idolatry. As long as Jacob resided in the Land of Canaan he felt secure in his ability to preserve Abraham’s legacy and bequeath it to the following generations.But now was the moment of truth. Jacob’s family goes down to Egypt, a strange land overflowing with idolatry. Here, outside his comfort zone, the question arises: Will this family manage to uphold its traditions, or will it become assimilated among the idol worshipers? For this reason, it was so important to Jacob to declare immediately that in his eyes there was no alternative. He holds back his emotions and does not embrace his son because he first must convey a critically important message to Joseph and the entire family. Even here, in Egypt, we plan to preserve our traditions and bequeath them to our sons and daughters and grandchildren.This is the source of the Jewish nation’s proven power: the ability to live among different cultures, be dispersed around the world – yet after thousands of years, remember our shared goal, the identity that was never lost, and return to the Land of Israel.The writer is rabbi of the Western Wall and Holy Sites.