Passing the torch of memory to our students 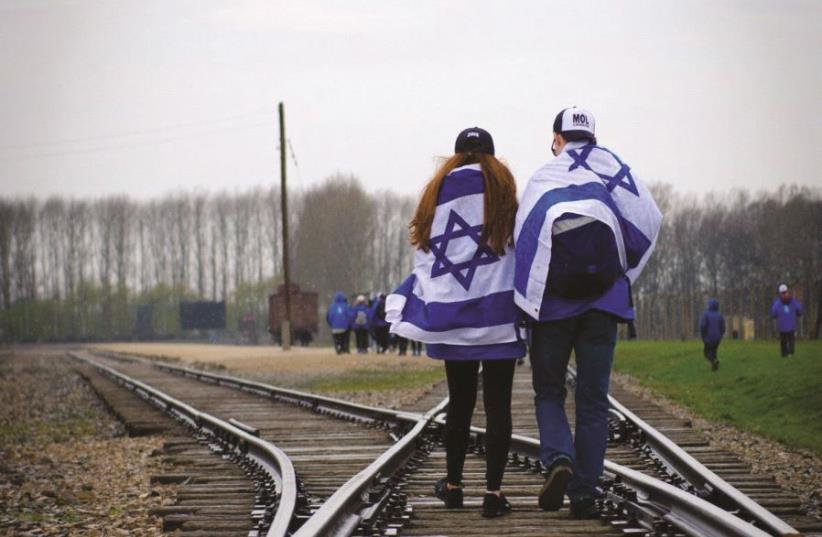 March of the Living
(photo credit: MARCH OF THE LIVING)
Advertisement
Around 180,000 Holocaust survivors live in Israel, with a slightly smaller number throughout the rest of the world. That’s approximately 350,000 in total. To think that I am one of this group is mind-boggling and much more so, following my first trip back to Poland since our escape from our destroyed town in 1939.Sadly, the survivors’ task of preserving the memories of the Shoah becomes increasingly difficult with the passage of time, as our numbers decrease by up to 1,000 per month. In fact, I recently lost a dear former classmate from Montreal whose survival path was very similar to mine. Time is of the essence, as experts predict that within just seven years very few of us will be well enough to share anything of significance.I wanted to go back to Poland 76 years later to share my memories with the students. I wanted, with the other Toronto survivors who so impressed me with their stories of courage and determination, to pass the torch of my memories to those students so that they, too, would become witnesses of the Shoah and ensure that it could never happen again.My twin granddaughters participated in the March of the Living in 2011, although they did not want me to come with them. “Zeyde [Grandpa],” they said, “you can’t take it emotionally.”But I was not about to pass up this trip with Maurice, my eldest grandson, emotions aside.The trip was both exhausting and exhilarating and provided two of the most profoundly moving weeks of my life. Highlights included touring the Old Town of the picturesque city of Krakow, walking around the ghetto and the remnants of Oscar Schindler’s factory. A visit to Plaszow with its towering memorial to 8,000 victims, aptly named “Torn Out Hearts,” was equally memorable.My visit to Auschwitz-Birkenau was transformative.I first learned of the Holocaust in a DP camp in Wetzlar, Germany, in 1946, having left a Soviet labor camp. It was there that I first encountered concentration camp survivors, many of whom were physically and emotionally damaged. We saw the numbers tattooed on their arms, heard their heartbreaking stories and saw numerous photos of the death camps. Despite having heard these firsthand accounts and having visited numerous Holocaust museums, nothing could prepare me for walking through the infamous gates with the obscene “Arbeit Macht Frei” (Work Will Set You Free) graphic.There were difficult and upsetting moments, such as listening to a description of the massacre of 2,000 Jews from the town of Tykocin, who were shot into open graves in the Lopuchowo Forest. I was trembling as I heard the story, but I felt Maurice’s hand on my shoulder to calm me.We also visited Treblinka, which I have often described as my neighborhood death camp, as it is located a mere 35 km. from Stoczek Wegrowski, where I was born. It was there that my grandmother – in whose memory I dedicated my march – perished, among 870,000 other Jews murdered by the Nazis. We located the stone marking my town, and I recited a prayer for the soul of my grandmother and all others who perished in Treblinka.Throughout the march, my grandson Maurice helped me to keep my emotions in check, but instead of breaking down, I felt uplifted and somehow relieved of a great burden.