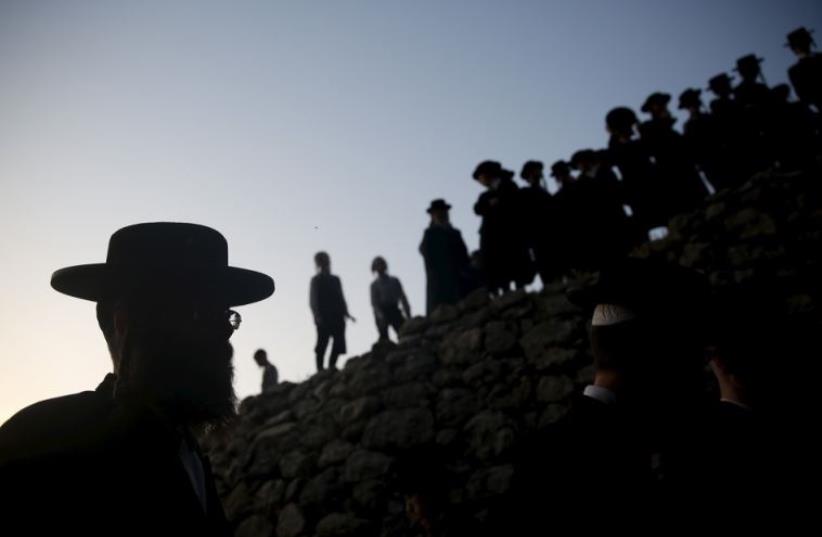 Ultra-Orthodox Jews take part in the 'Mayim Shelanu' ceremony to collect water from a natural spring to make matza
(photo credit: REUTERS)
Advertisement
Jewish sources identify hatred of the Jews as an ineradicable human sickness. At the beginning of the Haggada, this concept is reiterated. After recounting the Ten Plagues visited upon the Egyptians, the Haggada states: “In each and every generation they [the nations of the world] rise up against us to destroy us. And the Holy One, blessed be He, rescues us from their hands.”Like the changing of the seasons, like the rising of the sun, like the ebb and flow of the seas, the nations of the world rise up against the Jews.Whether one believes it is a redeeming God who has ensured Jewish continuity throughout thousands of years of exile and travail, there is no denying lethal hatred has been a central theme of Jewish history.Why? A common answer is that the Jews are, and always have been, different. In a recent essay for Newsweek, Rabbi Jonathan Sacks used this explanation for anti-Semitism.“Jews have been hated because they were different,” Sacks wrote. “They were the most conspicuous non-Christian minority in pre-World War Christian Europe. Today they are the most conspicuous non-Muslim presence in an Islamic Middle East.”French philosopher Bernard-Henri Lévy explained it similarly in an address to the UN General Assembly.In the medieval times, anti-Semites hated the Jews for supposedly killing Christ, Lévy said. During the Enlightenment, secularists hated them for producing monotheism.In the 19th and 20th centuries racists hated the Jews because they supposedly belonged to a polluting species. Socialists hated Jews for being plutocrats bent on dominating the world. Nationalists hated Jews for being communist underminers of the state.Today Jews are hated for maintaining a nation-state for Jews when Europeans have supposedly moved beyond their national differences to create a union.But the simple fact that Jews are different does not explain why they arouse such strong emotions. What makes hatred of Jews unlike any other prejudice or bigotry is the element of envy. Christians hated Jews not just because they thought Jews killed Jesus. They hated them because Jews were around when Jesus taught, but stubbornly refused to accept Jesus as their savior.Thinkers of the Enlightenment hated Jews because the Jews had invented Western religion, their greatest enemy.Nationalists, communists and other anti-capitalists hated Jews because of their economic success.And today hatred of Israel is driven in large part by envy as well. How is it that a tiny state in the most backward part of the world that is surrounded by enemies has been so remarkably innovative and dynamic? Even the very first recorded incident of anti-Semitism was a product of envy. In 419 BCE, a man called Hananiah wrote a letter to the Jewish garrison of Elephantine, an island in the Nile River, that has come to be known as the “Passover letter” because it contains a decree stipulating the proper observance of Passover.The letter contains a warning from the Persian king Darius II to Arsames the governor of Egypt ordering the Egyptians of Elephantine to stay away from their Jewish neighbors during Passover. Unfortunately, Darius’s warning was not heeded for long. Nine years later the Egyptians destroyed the Jewish temple of Elephantine.What motivated the Egyptians to do such a thing? Historian David Nirenberg, in his book Anti-Judaism: The Western Tradition, suggests the following explanation: “The Egyptians were offended... by the very nature of the Passover festival as a reenactment of the Exodus from Egypt,” Nirenberg writes. “What was for the Jews a commemoration of liberation and of the victory of monotheism over idolatry, was for the Egyptians an offensive celebration of the destruction of Egypt and the defeat of its gods.”Egyptians living under Persian rule could not bear seeing the Jews gloating about how their ancestors had dominated their country centuries before. In an envious rage they lashed out.As long as nations and individuals feel insecure about their own national histories, religions, ideologies and cultures, the Jews will continue to arouse strong feelings of resentment and envy. Anti-Judaism will subside only when non-Jews are able to come to terms with their own limitations and weaknesses. In the meantime, sadly, the words of the Haggada will continue to ring true.