Looking back at these selections, it seems that the capacity for kindness, respect and “fighting well” crosses all continents and cultures. 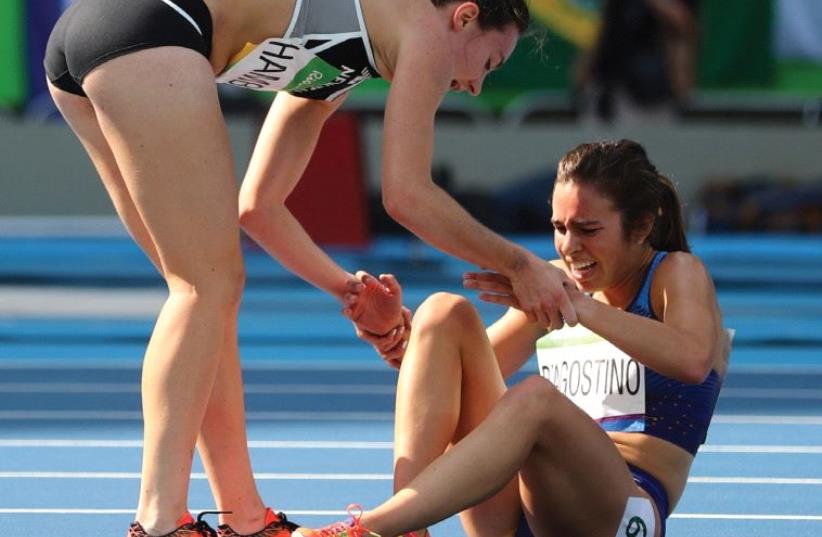 Nikki Hamblin of New Zealand stops running during the race to help fellow competitor Abbey D’Agostino (US)
(photo credit: REUTERS)
Advertisement
I guess I am naïve. Nostalgic perhaps. The words of Pierre de Coubertin, imparted by my colonial schoolteachers in South Africa, still ring in my ears. “The important thing in the Olympic Games is not to win, but to take part. The essential thing is not to have conquered, but to have fought well.”Over 120 years have passed since de Coubertin founded the Modern Olympic Movement. Today’s Games typify a very different world, with the end justifying almost any mean (pun intended).The fierce competitions of Rio 2016 were anything but games. Don’t get me wrong. I have great admiration for sporting prowess and achievement. Yet there is an extra something which I value even more. Even in a cynical drug-enhanced environment, where tens of millions of dollars and website hits are on the line, here and there participants rise to the occasion and produce performances that remind us of the fundamental ethos of the event.So with your permission, I humbly present my ultimate 2016 Olympic podium.Firstly let me mention those who made the short list: Fifty-four-year-old Argentine sailor Santiago Lange lost part of a lung to cancer last year, yet found the strength to win gold in the Nacra 17 sailing event together with Cecilia Carranza Saroli. Another honorable mention goes to 41-year-old Uzbeki gymnast Oksana Chusovitina, the oldest athlete ever to take part in women’s gymnastics. In an attempt to challenge Simone Biles (who is just two years older than Chusovitina’s 17-year-old son), she attempted the “Produnova,” the incredibly risky “vault of death.” She was not successful but luckily avoided injury! Simone Biles, Carlin Isles and undoubtedly many others overcame very difficult childhoods. Wayde Van Niekerk weighed a little over 1 kg. at birth, yet the 24-year-old South African won the men’s 400 m. by a mile (Berra-ism intended), breaking Michael Johnson’s legendary world record in the process. However, it is the man’s record of humility, generosity and level-headedness that wins me over. He consistently credits God, his mother, stepfather and coach (a local great-grandmother) for his success. Preferring to live at home, he shares a bedroom with his brother and a car with his mother.AND NOW for the medalists: Bronze is awarded to Philip Craven. You have probably not heard of the man who is president of the International Paralympic Committee. His medal is awarded for the fearlessness he displayed contrary to his Olympian colleagues, in standing up to the Russian government. This is what he said in announcing the ban on all Russian Paralympic sportspeople: “The Russian government has catastrophically failed its para-athletes. Their ‘medals over morals’ mentality disgusts me. The complete corruption of the anti-doping system is contrary to the rules and strikes at the very heart of the spirit of Paralympic sport.” That statement takes courage and commitment, fundamental traits of a great Olympian! MY SILVER is shared by two middle-distance runners. “She helped me first. I tried to help her. That girl is the Olympic spirit right there,” said New Zealand’s Nikki Hamblin, who, in a women’s 5,000 m. heat, fell and accidentally tripped America’s Abbey D’Agostino. D’Agostino quickly got back up to help her fellow competitor who remained on the ground after falling hard on her shoulder. Crouching down, D’Agostino helped the New Zealander to her feet and urged her to continue. Refusing to quit herself, D’Agostino ran the rest of the race with an ankle injury sustained in the collision, while Hamblin stayed by her side to help her. Both completed the race and embraced before D’Agostino was taken from the track in a wheelchair.FINALLY, THE gold: The archipelago of Fiji consists of more than 300 islands and has a population of fewer than a million souls. Fiji had never won an Olympic medal. The fact that their first is gold and in a highly competitive team sport is massive. Success in Rugby Sevens requires a combination of speed, physical strength, dexterity, intricate team work and the intellectual ability to assess complex situations and optimize them in fractions of seconds. The great Fiji men’s team mastered all these elements, culminating in a comprehensive victory in the final against Great Britain (population 64 million). Imagine the island-hopping needed just to get all the players to practice together! But more than this great achievement, what earns them the pinnacle of my podium is the players’ conduct after their triumph. For rather than a display of understandable bravado by these large-framed, perfectly toned athletes in their moment of great glory, each player in turn got down on his knees and bowed their heads in a remarkable show of respect for Princess Anne who awarded them their medals and then clapped three times, a tradition of the Fijian Kava ceremony, signifying the bringing together of families. To my mind there was no greater moment of grace than that, through the momentous weeks of Rio 2016.YOU MAY agree or disagree with my choices, but after all, the important thing is to take part! In any event, de Coubertin would have been proud.Whether you like it or not, the natural attributes required to succeed in specific sports are very generally but frequently determined by race. How else do you explain, for example, how the 2.7 million people in Jamaica have produced over 50(!) athletic sprint medals since 2000? Yet looking back at these selections, it seems that the capacity for kindness, respect and “fighting well” crosses all continents and cultures.As for Phelps, Ledecky, Bolt, et al., well, they have enough medals and dollars to temper their disappointment at not winning this one. Richard Shavei-Tzion lives in Jerusalem. He did not get much sleep during the Olympic Games.