Please go to your seat, sir 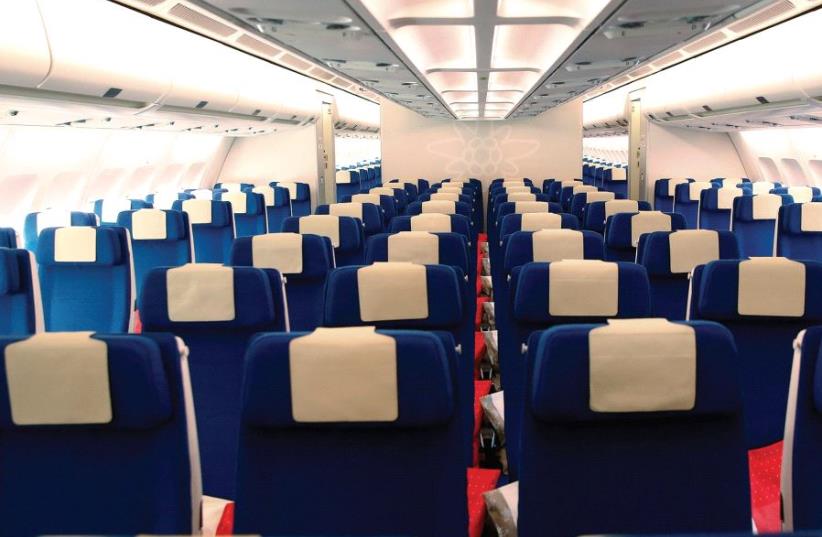 PLENTY OF room to sit, but no room for discrimination
(photo credit: REUTERS)
Advertisement
Supporters of religious freedom in Israel shouldn’t be flying too high, despite last week’s landmark ruling in the Jerusalem Magistrate’s Court against El Al’s practice of pandering to haredi (ultra-Orthodox) attempts to enforce gender segregation on its flights.In purely practical terms, the ruling is good news for passengers on Israel’s national airline.No more interminable waits on the runway while stewards and stewardesses run around looking for a volunteer to switch seats with a haredi man who can’t bring himself to sit next to a woman for the duration of a flight.Given that El Al has the worst record for taking off on time of any international airline – 56% of its flights take off late according to aviation insights company FlightStats figures for 2016 – the airline too is probably relieved it can tell its uncompromising haredi passengers where they can stick their overhead luggage and sit down.In a clear conflict between religious sensitivity – some haredi men refuse to sit next women not their wives or daughters out of fear of even the slightest accidental physical contact with a woman – and the country’s secular laws, this time around the rule of law won.In her ruling, Judge Dana Cohen-Lekach clearly stated that asking a passenger to move from their assigned seat because the adjacent passenger does not want to sit next to them due to their gender “is a direct violation of the law preventing discrimination.”This is not the first time the court has had to rule against gender segregation in the transportation realm. Back in 2011, Supreme Court Justice Elyakim Rubinstein forbade the forcing of women to sit in the back on buses covering routes most commonly used by the haredi community.Pointedly, Rubinstein wrote in his summary: “As I now read over these lines emphasizing this [the fact that women must sit where they like] I am astounded that there was even a need to write them. Have the days of Rosa Parks, the African American woman who collapsed the racist segregation on an Alabama bus in 1955 returned?” To answer Rubinstein’s rhetorical question, yes, they probably have. Although the bus companies are not allowed to make women sit at the back, the common custom on some routes is for “voluntary” segregation, and women who dare or mistakenly choose to sit at the front of the bus are often the victims of verbal harassment.The sad truth is that for every step forward to becoming a modern, egalitarian society, there are also a number of significant steps backward. For example, while the number of female combat soldiers continues to rise and a fourth mixed-gender battalion is scheduled to become operational later this year, Israel’s Sephardi Chief Rabbi Yitzhak Yosef told his followers last month that Orthodox soldiers should ostentatiously ignore female singers at official ceremonies.If given what he termed “the strange order” to listen to a female singer, Yosef said Orthodox soldiers should “take off their glasses, put a book in front of their eyes, and show conspicuously that we’re not listening, that our mind is on Torah.”In the same Saturday-night sermon, as reported by the Kikar Shabbat website, Yosef also implicitly compared immodestly- dressed women to “animals,” saying: “If secular people knew how much we respected women, and all that we do to preserve women’s dignity: a woman is not an animal, you have to respect her honor. Dressing modestly is that honor.”And for these and other pearls of wisdom, such as telling a rabbinical conference earlier this year that rabbis should tell the Israeli public that in the event of a legal dispute they should take their cases to a rabbinical court (where women, of course, generally cannot be witnesses) rather than to civil courts, Yosef receives a handsome salary from the state.Indeed, as long as the haredi parties hold the balance of power in the country’s political system, Israel will never be a truly egalitarian society in which all persons, irrespective of gender or religion, are equal. The cabinet, for example, approved at the beginning of last year the creation of a permanent and official separate area for mixed-gender prayers at the Western Wall. But under pressure from his haredi coalition partners, Prime Minister Benjamin Netanyahu on Sunday suspended the implementation of this historic decision.And if you want to get married outside of the Orthodox rabbinate in this country – forget it. While you can have whatever ceremony you want, the happy couple will still have to travel overseas and get married all over again in a registry office in order for their marriage to be recognized here. Getting a haredi passenger to sit down in his assigned seat on an El Al plane doesn’t, at the end of the day, really tip the balance in favor of freedom from religious coercion.The writer is a former editor-in-chief of The Jerusalem Post.