Police and thieves: Crime in the Arab sector

A sudden national priority that requires a nationwide effort. 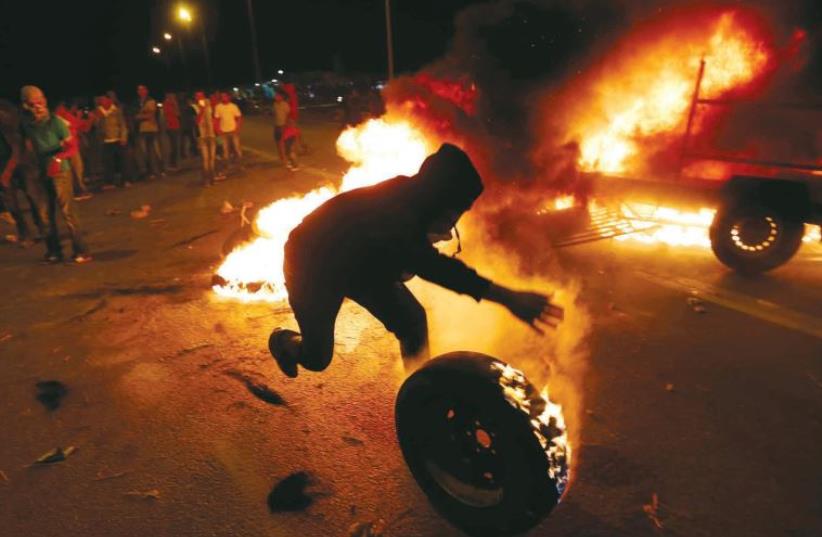 An Israeli Arab rolls a burning tire in a protest in the southern village of Hura in November 2013
(photo credit: REUTERS)
Advertisement
The news that December morning broke with a bang, and for good reason. An Israeli was gunned down in a vehicle, strafed with automatic rifle fire near the seam line with the West Bank in southern Israel, with all signs pointing to another shooting attack in the “lone-wolf intifada.”Within minutes though, everyone could breathe a sigh of relief – it was a criminal shooting, part of a blood feud in the nearby Beduin village of Hura. Just Arabs killing Arabs; feel free to change the channel.The next day, police located the car used in the drive-by shooting, abandoned next to a cemetery in Hura. As detectives began to cordon off the scene, they were attacked by a mob of rock-throwing locals, and one local man even tried to use the volley of rocks as cover to sneak up and torch the vehicle in a failed bid to destroy evidence, according to police.Ever since Israeli-Arab Nashat Milhem killed three in a shooting spree in Tel Aviv on New Year’s Day, the issue of firearms in the Arab sector has suddenly, mercifully, become a national priority. This is after years in which it was mainly discussed only by local Arab leaders, the police and security officials.Until Milhem began spraying Dizengoff Street with automatic fire, the guns were mainly confined to the Arab sector, part of homicidal clan violence, organized crime feuds and the drug trade. But with an Israeli Arab shooting up the heart of Tel Aviv – now we have a problem.THE TWO incidents in Hura speak volumes about crime and the Arab sector and how difficult it will be for the government and the security services to carry out the sort of large-scale anti-firearms operations in the Arab sector that politicians have been pushing for the past week.The drive-by shooting came less than 24 hours after a Hura man was killed in the village during a brawl between two rival clans. The drive-by the next day was seen as a reprisal killing for that murder, and though the same patch of southern Israel saw two murders in less than 24 hours, there was little coverage, because murders and gunplay in Beduin villages are about as dog-bites-man as you can get.The attack on police at the cemetery the next day was a microcosm of the difficulties law enforcement faces in these communities. Officers working to solve a murder – in a community where locals and their political leaders routinely accuse police of not caring about solving murders – are attacked by locals who risk arrest and injury in order to obstruct justice and thwart police efforts to catch a killer.Without interest from the wider public and the media, there will be little political impetus for the government to make fighting crime in the Arab sector a national priority. And even if it does remain a priority, as long as police do not receive sufficient cooperation from those very same communities, their efforts to fight crime and rid their streets of firearms will be dramatically more difficult.The rock-throwing mob is perhaps an extreme example, but it is still part of a wider atmosphere of animosity. In communities across the Arab sector, enlistment in the police is almost nonexistent, working for the police brands you a “collaborator,” and there is a strong culture of silence preventing people from cooperating with authorities. Add to this the very real and understandable fear of violent retribution from criminals, and one can see why cultivating police informants in the Arab sector is such a difficult task.THIS IS consistent with the issues inherent to minority policing in countries around the world. In minority communities, police from the majority population are very often the most visible arm of the state, and the source of fear, suspicion and, often, abuse. Thus, there is often an almost impossible situation where the very community that has the most volatile and loaded relationship with police is the one that also needs them the most, and the one from whom police need the strongest working relationship.Israeli Arabs are disproportionately the victims and perpetrators of violent crime, with over 1,100 fatalities from gun violence in the Arab sector since 2000. According to figures presented at a Knesset hearing in 2012, Israeli Arabs – who make up around 20 percent of the population – were involved in 67% of homicides and 70% of attempted homicides, and made up about 40% of homicide victims.This is a problem that mainly ravages their communities and not ours, but must remain a national priority nonetheless.Another recent story showed the difficulties of dealing with the scourge of crime in the Arab sector.In the first days of the manhunt for Milhem, when investigators suspected he might be hiding in north Tel Aviv, officers fanned out across Ramat Aviv, home to Tel Aviv University and a large number of Israeli-Arab students who study at the institution. In a series of Facebook posts that went viral in Israel, Israeli-Arab students from the university described how police and Shin Bet agents came and searched their apartments without warrants, rifling through their belongings and interrogating them as part of their search for Milhem.The students said some officers were nice, some were rude and intimidating, and all of them left them with the feeling that they are being treated as criminals simply because of their race, even though they are college students without criminal records or any connection to Milhem.Even with the support of politicians and increased police manpower and resources, fighting this problem will remain impossible if law enforcement doesn’t receive greater cooperation from the Israeli- Arab community.Treating them as second-class citizens and criminals until proven otherwise is not going to help this campaign. The writer covers crime, African migrants and security issues for The Jerusalem Post. His blog can be found at www.benjaminhartman.com