Police and Thieves: In praise of ‘arsim’

There’s a wide gulf between actual antisocial behavior and what I believe the term ‘arsim’ too often refers to, namely, those Israelis who look different from ‘the rest of us.’ 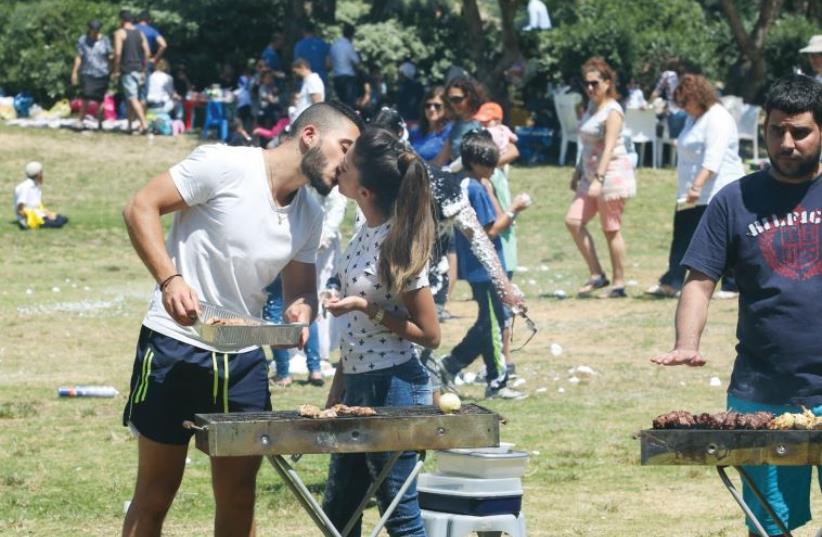 Independence day barbecue
(photo credit: Courtesy)
Advertisement
It was a mad dash like every year on Independence Day – get out early enough to beat the crowd, find a parking space and seize a patch of earth before the hordes leave no space to barbecue and no room to breathe.As usual, it worked out, the barbecue spot was lightly crowded and positively peaceful as these things go.At one point during the afternoon at the Yad Lebanim Park in Petah Tikva, I walked to find a bathroom and a faucet to fill a water bottle, taking me from our quiet corner to the vast open expanse where hundreds of families were grilling meat, smoking narghiles, lying out in the sun and blasting Mizrahi pop on portable speakers. I lingered a while taking it in, watching what looked like might be a much better time, and thought to myself that maybe we should have set up camp on this side.Going out often seems to be an exercise at avoiding Israelis, finding the beaches and parks – in Israel – where “they” don’t go en masse, the clubs where “they” are not let in, and the gyms where “they” come to work out and not to show off.We all know who “they” are, and even in polite company we call them arsim and frechot, the Israelis who allegedly give the rest a bad name, whose presence is a beacon telling all “respectable” Israelis to steer clear.You only have to go online on any given day on forums like Secret Tel Aviv to see people asking about bars, clubs or gyms where they can avoid arsim; or the inverse – people shamelessly warning about clubs, beaches and gyms that are “full of arsim.”Maybe it took a few years here, but I’ve come to the realization that I tend to prefer arsim to the people who complain about them. I find that, far too often, these complaints reek of elitism and pretension – if not plain and simple racism – and the objects of this scorn rarely have a voice in the conversation.That’s not to say I’m not guilty; we all are. Almost everyone in Israel complains about arsim at some point or another – even arsim do – though rarely do people admit that they themselves are arsim.I ALSO understand some of the negative behavior that creates the nasty stereotype.It’s hard to be a crime reporter and not encounter countless stories of hotheaded Israelis springing to violence in an instant, or juvenile offenders – often in those areas where “they” live – pulling out knives for nothing, ending their lives before they begin. And it’s also clear to me why people seek to avoid events – festivals, concerts and the supermarket on Friday afternoon – where there will be masses of Israelis excited or stressed out, largely because I do it, too.But there’s a wide gulf between actual antisocial behavior – say, the loudmouthed teenagers lighting up cigarettes on a city bus or young men spouting vulgar and sexist slurs at women who turn down their catcalls – and what I believe the term “arsim” too often refers to, namely, those Israelis who look different from “the rest of us.”They don’t talk “right,” they don’t look educated and they dress loud. They wear nail extensions that are far from subtle, they like corny Mizrahi pop singers who don’t care what music critics think about them, and they play it loud. (And about Mizrahi pop – call it lowbrow if you want, but it’s the defining sound of Israel today and it makes people happy – there’s a reason it dominates the playlists at Israeli weddings and wafts through the park on Independence Day.) In a sense it takes me back to Austin, Texas, my hometown, and the type of stuff you can hear from people in polite company. You know, Texas (or fill in your red state of choice here) would be great if it weren’t for these rednecks – these provincial, conservative, small-minded yokels.They’re the ones giving the rest of us a bad name; they’re the ones who forged the aggressive and boorish stereotype we have to bear.You get the idea.WHAT THESE blanket generalizations have in common is that they’re shallow and so often made from afar. People think they already know those arsim blasting Mizrahi music at the park on Independence Day or trance music on the beach at night when they’re trying to camp in peace, all without speaking to them. Many of the greatest people I’ve ever met – be they in Texas or Israel – are the same type of people who get judged from a distance like this. They’re generous and genuine and would give you the shirt off their back or put their life on the line for you in an instant and still get written off the second they open their mouth and someone hears the way they talk.The Eurovision song contest on Saturday night was an odd occasion to ponder this. I first heard of the contest when I moved to Israel 14 years ago, and was living in Arad in the Negev and spending weekends in Beersheba. I wasn’t up to date on the social hierarchy of the country I hardly knew and whose language I didn’t speak, but the people I first encountered spit when they saw a black cat, went to kebab restaurants on special occasions, and saw their future in apartment blocks in the Negev – not in Tel Aviv or Berlin.It’d be easy for somebody to write off a lot of those people I met as low class or arsim, but they were just as Israeli as everyone else, and what a shame it would be to spend your life here trying to avoid them. They’re a giant part of what makes this country what it is, and what makes it great.Simply put, thank God for arsim; it wouldn’t be Israel without them. The writer covers crime, African migrants and security issues for The Jerusalem Post. His blog can be found at www.benjaminhartman.com