Police and Thieves: Why race back to normal?

When people lose a loved one, their world collapses, yet they see that for everyone else the sky has not fallen. 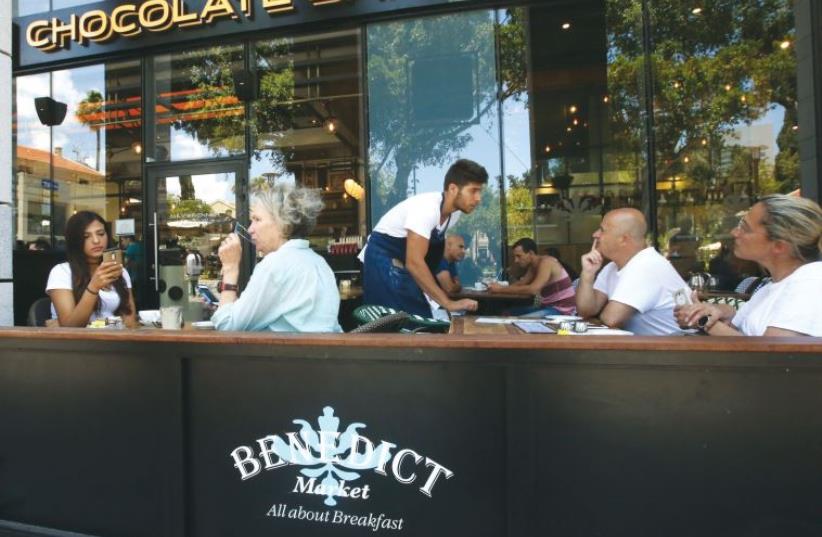 A small memorial is seen while patrons dine at the Max Brenner coffee shop, the scene of last week’s terrorist attack in which four people were killed
(photo credit: MARC ISRAEL SELLEM)
Advertisement
It was a cool autumn evening in Jerusalem nearly 14 years ago, but it feels like just the other day.It was late 2002. The second intifada was still in full force, and I had recently moved to Israel for post-graduate studies in the Negev. Our study group was taken on an outing to Jerusalem, where we were brought to the home of a young man with a story to tell.Eight months earlier, in March – the worst month of the second intifada – Daniel had decided to go out with friends in the capital and was horribly wounded in the Café Moment bombing, which took 11 lives. He spoke of the blast, his injuries, the friends he lost, and the terror he’d felt ever since.An hour or so later, it was over. Our program director thanked Daniel. Then, turning to the students, who had just heard from the survivor of a nighttime suicide bombing in downtown Jerusalem, he said: “Now, you have three free hours downtown to go out.”It was one of my first brushes with this particular Israeli dichotomy – the proximity to death and terrorism, and the stubborn drive to live life to the fullest. But I learned to adopt it quickly enough.IN THE years since, and especially following events like the Sarona Market shooting attack last week in Tel Aviv, I’ve come to believe that there may be a dark side to this defiance.I saw it on Thursday at Sarona, where, if not for the mob of journalists and politicians, you wouldn’t have known that four innocents had been murdered not even 24 hours before. The site of the attack was spotless, the tables full of patrons making a point that life would go on almost without taking a moment to breathe.One man setting up a makeshift memorial took issue with the display, saying it saddened him to think that the victims had yet to be named – much less buried – and the restaurants were already back open, as though nothing happened. He was in the minority opinion, as Israelis from all walks of life passed through Sarona speaking about how important it was to “not let terror stop us” and “show that life goes on.”While it’s true that in most other countries people probably wouldn’t have this sort of perseverance, is it purely a virtue? Is it even logical? I thought about this more on Sunday night, when news broke of the Orlando massacre. Can anyone picture the owners making a point of reopening the very next night at full force? True, it’s a crime on a much bigger scale than Sarona, so it would probably take more time to open.Still, it’s hard to imagine that it will ever really go back to “normal,” that the staff and regulars will clamor to get back in the front door and send a statement of defiance where their friends were murdered a week earlier.And why should they? Why not take time to mourn, to heal, to treat the trauma of the survivors? When I first encountered this Israeli defiance, they were truly terrifying days of suicide bombings and shooting attacks across the country. The attitude was that life must go on, although countless Israelis who had the choice to do so simply stayed home. They stayed with their families, they stayed indoors, they stayed safe.It wasn’t something to be ashamed of; it was logical, understandable and a responsible thing to do.When people lose a loved one, their world collapses, yet they see that for everyone else the sky has not fallen. They see that life has moved on as though nothing happened.I don’t believe it honors the dead for us to leap back into daily life right away, to not stop, pause, mourn and regroup.AFTER EVERY round of violence in Israel, things get back to normal so quickly for everyone except for the dead, the wounded and their families. Everyone else is busy being defiant and getting back to focusing on the mundane things in life. We count the wounded and deceased, we lick our wounds and move on.But rarely do we seem to think about the trauma, about the victims of shock and the wounds we don’t see. Every round of violence and every brutal terror attack takes a toll on all of us, and moving on too quickly might mean we aren’t quite dealing with the trauma, that we are stubbornly blowing past the stress and shock, and leaving it untreated as we charge forward because “life must go on.”This Israeli perseverance is remarkable, but it is not a sign of weakness to take a step back to heal.