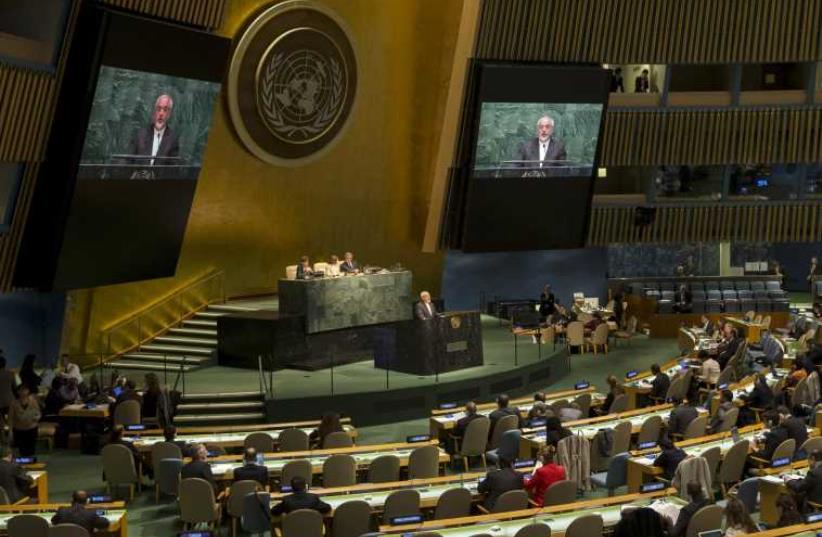 Iranian Foreign Minister Mohammad Javad Zarif addresses the Opening Meeting of the 2015 Review Conference of the Parties to the Treaty on the Non-Proliferation of Nuclear Weapons (NPT) at United Nations headquarters in New York, April 27
(photo credit: REUTERS)
Advertisement
China, France, Germany, Russia, the United Kingdom, America and the European Union (E3/EU+3) – the Septet – have shown a rare degree of international cooperation in signing the Joint Comprehensive Plan of Action (JCPOA) with Iran aimed at limiting Iran’s nuclear horizons.Such welcome unanimity presages the possibility of a United Nations Security Council Resolution under Chapter VII Article 42 of the UN Charter authorizing military action against Islamic State – already declared a threat to world peace and security in Security Council Resolutions 2170 and 2199.
See the latest opinion pieces on our page
The Security Council’s inability to commence military action to free vast tracts of Syria and Iraq and its captive civilian populations from IS rule – has been frustrated by the following conflicting national interests of Septet members and Iran:
1. Russia and Iran backing the Assad regime in Syria.2. America, France, Germany and the United Kingdom forming part of the London 11 supporting rebels attempting to overthrow the Assad regime.3. China and Russia vetoing Security Council resolutions aimed at resolving the Syrian conflict.4. Shi’ite Iran – backed by Russia – focusing on preserving its interests in Iraq, the first Arab country to be ruled by a Shi’ite government since Saladin overthrew the Fatimids in Egypt in 1171.Preserving these competing interests could explain the deliberate and extraordinary decision by the Septet to not demand changes in Iraq’s current aggressive and hostile behavior – as US President Barack Obama’s remarks at a news conference hailing the JPCOA make clear: “And my hope is that building on this deal, we can continue to have conversations with Iran that incentivize them to behave differently in the region, to be less aggressive, less hostile, more cooperative, to operate the way we expect nations in the international community to behave. But we’re not counting on it.“So this deal is not contingent on Iran changing its behavior. It’s not contingent on Iran suddenly operating like a liberal democracy. It solves one particular problem, which is making sure they don’t have a bomb. And the point I’ve repeatedly made and I believe is hard to dispute is that it’ll be a lot easier for us to check Iran’s nefarious activities, to push back against the other areas where they operate contrary to our interests or our allies’ interests if they don’t have the bomb.“And – and so will they change their behavior? Will we seek to gain more cooperation from them in resolving issues like Syria or what’s happening in Iraq, to stop encouraging Houthis in Yemen, we’ll continue to engage with them.“Although keep in mind that unlike the Cuba situation, we’re not normalizing diplomatic relations here. So the contacts will continue to be limited, but will we try to encourage them to take a more constructive path? Of course. But we’re not betting on it. And in fact, having resolved the nuclear issue, we will be in a stronger position to work with Israel, work with the Gulf countries, work with our other partners, work with the Europeans to bring additional pressure to bear on Iran around those issues that remain of concern.”Iran – diplomatically unscathed, emboldened and financially enriched once the current international sanctions omelet has been unscrambled – will not change its behavior – nor will the Septet members abandon their perceived national interests.Iran’s macabre dance with death will assuredly continue in the Middle East.Obama could be betting this latest show of Septet- Iranian co-operation will finally procure Security Council approval to destroy their common enemy – Islamic State – which Obama’s American- led coalition of 62 states has spectacularly failed to accomplish.Hopefully Obama’s giant gamble pays this huge dividend.
Advertisement
Subscribe for our daily newsletter