The Jewish community has maintained its long-term negative attitude toward the FN. 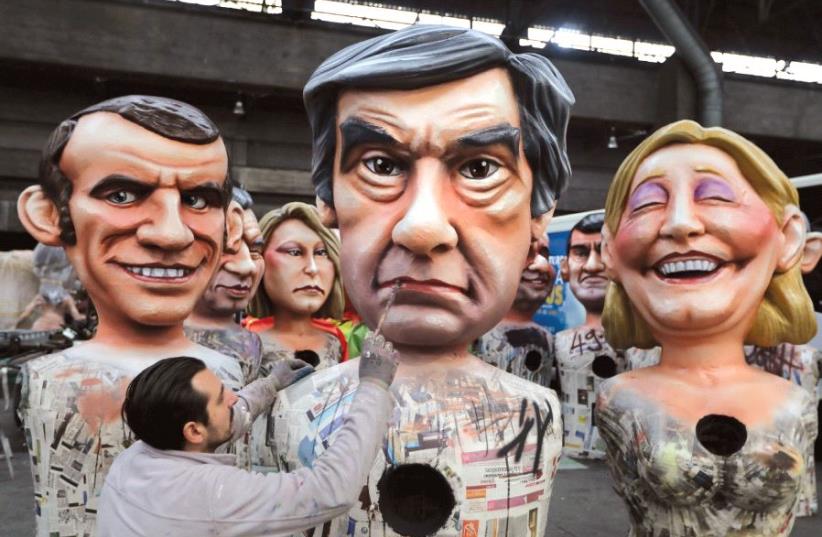 A WORKER puts the final touches on a figure of former French prime minister Francois Fillon, flanked by National Front leader Marine Le Pen and Emmanuel Macron, head of the political movement En Marche!, or Onwards!, during preparations for the carnival parade in Nice, France, earlier this month
(photo credit: REUTERS)
Advertisement
The four main candidates in the upcoming presidential elections in France have all taken problematic positions concerning Israel, the country’s Jews, or both. The first round of the elections will take place on April 23. If no candidate obtains the majority, the two candidates with the highest votes will have a run-off in the second round on May 7.Polls for the past months indicate that Marine Le Pen, the leader of the extreme right-wing National Front Party, will pass to the second round. This is a rather safe prediction, as polls show that many of those intending to vote for her are unlikely to change their opinion before the election. Yet, at the same time, polls also indicate that the other candidate who makes it to the second round, whether it is former prime minister Francois Fillon of the right-wing Republican Party, or the independent centrist Emanuel Macron, will easily defeat Le Pen.Marine Le Pen stresses that her party’s positions have evolved since she has taken charge. Her father, Jean-Marie Le Pen, the founder of the party, is a notorious Holocaust distorter and antisemite. He has repeatedly called the gas chambers “a detail of history.”Marine Le Pen has distanced herself from him and had him expelled from the party in August 2015. She has also condemned a terrorist attack in Jerusalem and has come out against anti-Israel boycotts. Yet in 2010 she criticized the Israeli blockade of Gaza. Furthermore, in 2012 when calling for a ban on Muslim headscarves in public, she said that kippot should also be included.She repeated that statement this month.The Jewish community has maintained its long-term negative attitude toward the FN. Then president of the Jewish umbrella organization CRIF, Roger Cukierman, said in 2015 that there was no cause to reproach Le Pen herself. He remarked, however, that “behind her are all the Holocaust-deniers, the Vichy-adherents and the followers of [Nazi collaborator] Petain.” He concluded that the FN “was a party to avoid even if it did not commit violence.”Fillon, the Republican candidate, is under pressure because the satirical weekly Le Canard Enchaine published that his wife Penelope has received 900,000 euros over the years as his parliamentary assistant. The claim is that she has done little to justify these payments.A poll showed that the great majority of French do not believe Fillon, who says that she produced value for money. As his support in polls declines, Fillon may well withdraw his candidacy.Fillon attacked Halal and kosher slaughter in 2012.He said that Jews and Muslims must drop their ancestral traditions of slaughter, which are not very relevant nowadays. The Jewish umbrella organization CRIF came out against him on this issue.Centrist Macron was economics minister from 2012 to 2014 in the Socialist government of prime minister Manuel Valls. He has said that more and more parents send their children to religious schools, which teach them hatred of the [French] republic. He added that they teach mainly in Arabic or elsewhere the Torah without teaching basic knowledge.The large French Jewish Social Organization (FSJU) came out with a press release saying that Macron’s statement was “profoundly offensive, incorrect and a caricature.” Its president, Ariel Goldman, said that “private Jewish education follows the school program established by the national ministry of education.”The FSJU also pointed out that the growth of enrollment in Jewish schools is the result of the increased antisemitism in public schools. Macron’s staff claimed that his words had been wrongly interpreted.Macron has visited Israel and said afterwards: “In Israel there is a culture of risk, which sometimes has been forgotten in France’s genes. There should be a capacity to revive this taste for risk. Without it we cannot do anything. We should go fast because our country cannot wait.”The Socialist candidate, Benoit Hamon, who defeated Valls in primaries, is in fourth place in the polls. He was, for a short time, education minister and belongs to the extreme Left of the party.Hamon is the most negative candidate as far as Israel is concerned. He has a substantial record of anti-Israel remarks. After the Gaza flotilla, he accused Israel of having caused a bloodbath. He was one of the main instigators of the recognition of the Palestinian state in the French parliament in 2014. Most recently, he expressed his happiness about the anti-Israel UN Security Council resolution 2334. There have been several additional anti-Israel statements over the years.Hamon’s position can be summarized as: being anti-Israel is a very good way to recover French Muslim voters lost during the Hollande presidency.The current Socialist government frequently takes pro-Palestinian positions. It initiated the useless Paris Middle East Peace conference and aggressively condemns building in the territories, including east Jerusalem.From an Israeli viewpoint, a hypothetical president Hamon is far worse than a president Le Pen. Yet the Israeli government avoids contact with the FN party. It does not want to legitimize a far-right movement with fascist origins.From the above, it can also be seen that the candidates’ attitudes toward Israel and toward local Jews are not necessarily parallel. In the long term, this may create a rift between Israel and a portion of France’s Jews.Overall, as said, all candidates are problematic, which reflects the general situation for Jews in France and the attitude of its governments toward Israel.The author is emeritus chairman of the Jerusalem Center for Public Affairs. He was given the Lifetime Achievement Award by the Journal for the Study of Antisemitism, and the International Leadership Award by the Simon Wiesenthal Center.