President Obama is no doubt concerned with solidifying his legacy in his remaining months in office. It would be an historic decision for him to move the American Embassy to Jerusalem. 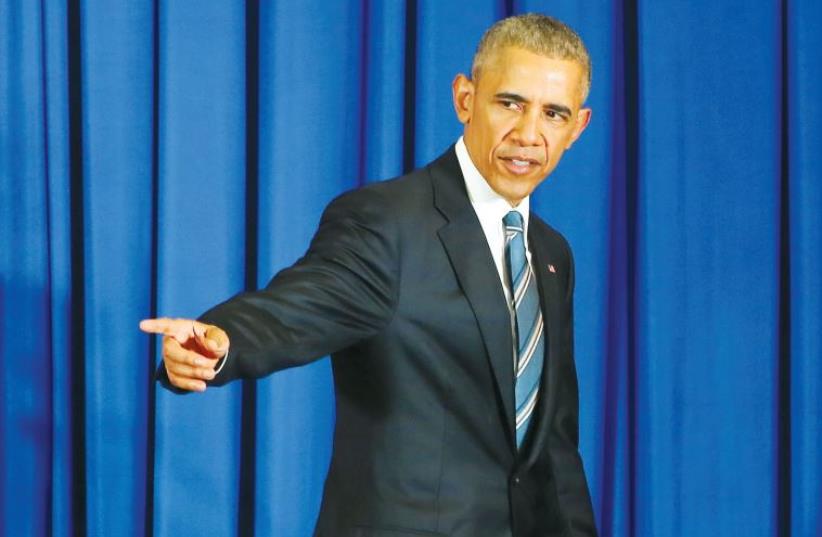 US President Barack Obama
(photo credit: REUTERS)
Advertisement
As the presumptive candidates for the US presidential election gear up for the main event after a grueling primary campaign, Israel once again focuses its attention on a quadrennial event – the forthright, yet insincere, promises to recognize Jerusalem as the Jewish state’s capital and to move the American Embassy there.Israel declared Jerusalem its capital in 1949 – by default referring for the time being to the western portion of the city, since Jordan occupied the eastern part. In fact, Jordan formally annexed east Jerusalem in 1950, and in 1953 pronounced it the country’s “second capital,” an arrangement recognized by only the United Kingdom and Pakistan.This physical absurdity was corrected by the reunification of Jerusalem in the Six Day War, although most nations prefer to ignore the fact that Israel’s capital since antiquity is Jerusalem. The standard argument for this denial of reality is based on the UN Partition Plan of 1947, which proposed a special international status for Jerusalem.The plan envisioned Jerusalem as a so-called corpus separatum, a separate municipal entity, for a period of 10 years, after which a referendum would be held to determine to which state the city would belong – the Jewish one or the Arab one – under the plan’s farsighted two-state solution. It was an idea whose time had not yet come.Israel maintains that General Assembly Resolution 181, a nonbinding proposal, became defunct when five Arab countries rejected it by invading the nascent State of Israel.In fact, there has never been any international treaty that applies the corpus separatum concept to Jerusalem.Donald Trump made the pro forma Jerusalem pledge at the annual American Israel Public Affairs Committee conference, whose participants cheered him for saying that, as president, he would “move the American Embassy to the eternal capital of the Jewish people, Jerusalem.”Hillary Clinton made her first public commitment to Israel’s capital in July 1999, when she was first lady and planning to run for the US Senate. “If I am chosen by New Yorkers to be their senator, or in whatever position I find myself in the years to come, you can be sure that I will be an active, committed advocate for a strong and secure Israel, able to live in peace with its neighbors, with the United States Embassy located in its capital, Jerusalem.”Just seven years earlier, her husband, while campaigning for the presidency in New York, affirmed his support for Jerusalem “as an undivided city, the eternal capital of Israel, and [for] moving our embassy to Jerusalem.” It is a pledge that candidates make with no intention of keeping and presidents ignore once in office – as Barack Obama has done in signing a waiver every six months.The US has 294 embassies, consulates and other diplomatic missions around the world – 27 of them in the Middle East and North Africa (MENA) region, more than any other country. All but one of them share one thing: They are located in the host country’s capital. But not in Israel.As Jeff Jacoby writes in The Boston Globe, “This isn’t just an absurdity; it’s an insult to an ally. It’s also a continuing act of appeasement to rejectionists who oppose Jewish sovereignty over any part of the Jewish homeland. Such discriminatory treatment is obnoxious; that is why presidential hopefuls keep pledging to fix it, and why the House and Senate more than a decade ago, by overwhelming majorities, passed a law – the Jerusalem Embassy Act of 1995 – requiring that the embassy be moved.”Every six months, each president since Bill Clinton has invoked “national security” to justify using the waiver provision of the Embassy Act. The State Department’s spin is that relocating it would amount to prejudging the status of the city, which should be settled by negotiation.But no one is suggesting that the embassy be built in other than the western part of town – where Israel’s government ministries, legislature, and Supreme Court are situated, for example. For any country not to recognize Israel’s seat of government as its capital is insulting and absurd.The what-will-the-Arabs-think argument is specious.Those who are our friends might gain some respect for the US for its doing the right thing, while our enemies do not care about embassies in Jerusalem as much as eliminating the Jewish state.President Obama is no doubt concerned with solidifying his legacy in his remaining months in office. It would be an historic decision for him to move the American Embassy to Jerusalem. It would be an act that binds our two democracies even closer together and sends the world the message that the survival of the Jewish state is not negotiable.