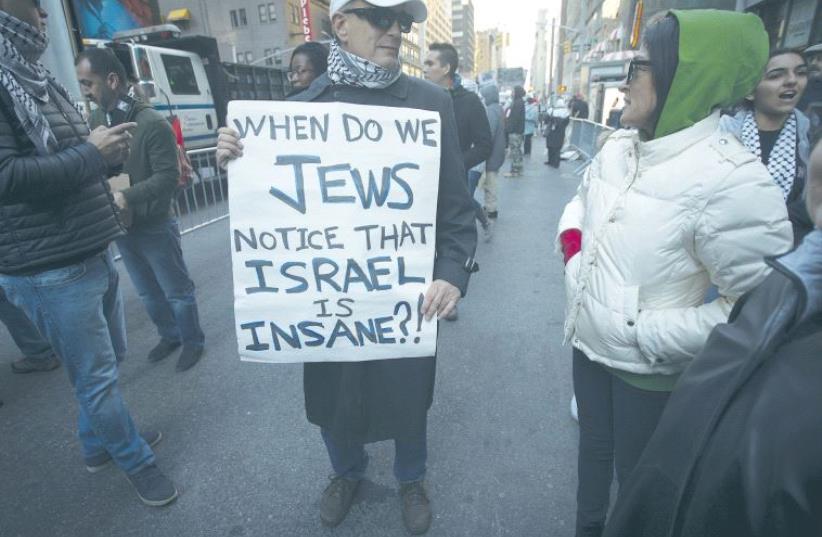 A DEMONSTRATOR holds a sign during a pro-Palestinian protest in Times Square, New York, last year.
(photo credit: REUTERS)
Advertisement
I recently listened to a sermon by Elliot Cosgrove, a leading Conservative rabbi in New York who spoke about the tension that exists between those who judge Israel through the lens of Prophetic Judaism, and Protective Jews who are primarily concerned with defending Israel from its legions of enemies.* Prophetic Judaism emphasizes its perception of injustices perpetrated by Israel against its minority citizens, and fancying themselves to be like the biblical prophets, its proponents cry out against Israeli leaders who don’t share their Progressive Prophetic political agenda.For Prophetic Jews, pro-Israel support is conditional on Israel’s treatment of Palestinians, often minimizing Israel’s security challenges and ignoring its offer of peace over the past 68 years.Protective Jews see Israel fighting for its survival against 400 million Arab Muslims, so many of whom are suckled on antisemitism, praying for the end of the Jewish state. Protective American Jews defer security choices to the Israeli electorate, who have to live and sometimes die with the consequences of their actions.Of course one should be both a moral and a pragmatic Israel supporter, but this dichotomy is real and needs to be addressed. If Israel is to maintain its American-Jewish support in the 21st century, the two groups need to find common ground for the good of the Jewish state, and Judaism in America.So how does that tension play out? What does it mean for Israel to be a light unto the nations, surviving the efforts to annihilate it in such a noble way that it remains the embodiment of Jewish values? The Prophetic groups criticize IDF actions, and wring their hands over the poverty of the Palestinians, but are silent about the cultivation of hatred directed at Jews, and silent about the corrupt political, economic and legal institutions of the Palestinians that keep them impoverished.Unfortunately many Prophetic groups define Israel with the broad brush of isolated negative anecdotes and egregious behavior that is the exception, not the norm.Prophetic groups don’t see the hypocrisy in receiving money from foreign governments whose agenda is to delegitimize Israel and support her enemies. They too often fail to denounce Palestinian behavior like glorifying martyrs who kill Jewish civilians, or even rationalize attacks against Israel as the desperate attempts of an oppressed people, a very non-prophetic moral equivalence.Israel’s raucous Knesset is called anti-democratic by many Prophetic groups, yet they ignore Israel’s toleration for Arab MKs who support the destruction of the state, something that would never happen in the American Congress.Israel’s ultra-Orthodox monopoly of the Chief Rabbinate is a serious problem that rightly upsets Prophetic and Protective Jews. It must be addressed for the health of the American-Israeli relationship.However the claim that it has already destroyed a democratic Israel isn’t true by a long shot.Full-time criticism of Israel is the MO of groups like Peace Now, Breaking the Silence, J Street and Jewish Voice for Peace (JVP).Earlier this year I spoke to the head of one of those Prophetic groups, Rabbis for Human Rights. When I recommended that his case for Palestinian rights would be more persuasive if he balanced his position by also advocating for Israeli human rights against incitement and attacks on Jewish civilians, he told me that was not the purpose of his organization.So is this group really a Prophetic group, or is it a pro-Palestinian group masquerading as pro-Israel group? Breaking the Silence travels the world detailing alleged abuses by Israeli soldiers.Its agenda includes support of boycott groups that want to end Israel as we know it.Shouldn’t it be described simply as a pro-Palestinian organization? JVP’s real agenda, according to NGO Monitor, is to create “a wedge” within the American Jewish community, while working toward the goal of eliminating US economic, military and political aid to Israel.When J Street said it could not say “who was right or who was wrong” during Israel’s last war against Hamas, weren’t they more pro-Palestinian than a Prophetic pro-Israel organization? So the real question is, can you balance security concerns and remain faithful to Jewish values? Of course you can, and you should.Mainstream pro-Israel organizations like AIPAC and AJC balance the security challenges Israel faces, while remaining faithful to Jewish values.They do not ignore the plight of innocent Palestinians, but they first and foremost are defenders of the only democracy in the Middle East, the only true ally of the United States in the region, and the only Jewish state in the world.Prophetic pro-Israel Jews need to be more realistic about Israel’s security concerns.They need to advocate for Israel’s right to defend itself from those who believe Israel doesn’t have a right to be a Jewish state in any part of the land, while remaining true to its Prophetic Jewish values, which true Protective lovers of Israel share.

*Rabbi Cosgrove referenced Stephen M. Cohen’s article “Prophets and Protectors of Israel” as the inspiration for his sermon.The author is the director of MEPIN™. He regularly briefs members of Congress, their foreign policy advisers, members of the Knesset and journalists.He regularly briefs Congress on issues related to the Middle East.
Advertisement
Subscribe for our daily newsletter