Putin is playing cat and mouse

Everything Putin does is calculated. Everything is for a purpose and the consequence of each action is known in advance. No move is left to chance and no act is without purpose. 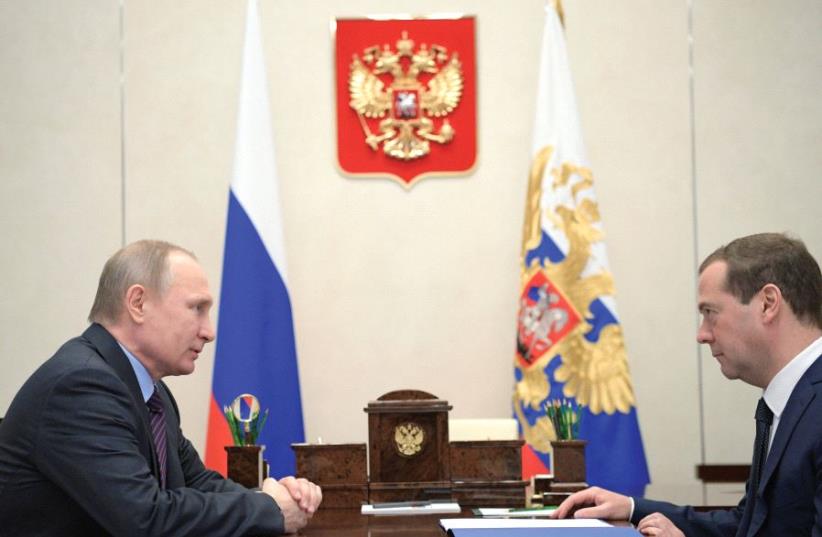 RUSSIA’S PRESIDENT Vladimir Putin meets with Prime Minister Dmitry Medvedev at the Novo-Ogaryovo state residence outside Moscow.
(photo credit: REUTERS)
Advertisement
Russian President Vladimir Putin is the quintessential example of an arrogant world leader.Everything Putin does is calculated. Everything is for a purpose and the consequence of each action is known in advance. No move is left to chance and no act is without purpose. Spontaneity is not a part of the Putin gestalt.So when Russian Air Force planes flying off the US coast rumble with US planes four times in a single week, we need to take notice and figure out why Putin initiated that action.The Russian planes were mostly Tupolev Tu-95 “Bear” bombers – planes that are capable of carrying nuclear weapons. Also involved were Russian Ilyushin Il-38 “Dolphin” patrol planes.The US responded by scrambling F-22 fighter jets, that were joined by Canadian CF-18 Hornets. Time and again they escorted the Russian planes away and each situation ended without harm or incident. The Russians claim that their planes were close, but still in international airspace. The US concedes that the Russians only actually entered its airspace on one of the four occasions.According to an official statement issued by the Russian Defense Ministry, Russia “regularly carries out patrol missions above the neutral waters of the Arctic, the Atlantic, the Black Sea and the Pacific Ocean.” And, “All such missions are carried out in strict compliance with international regulations and with respect to national borders.”So why did this happen not once, not twice, but four times? Russia was sending a message to the United States and, by extension, to the rest of the free world. The most crucial part of that message is that Russia has very long reach.Russian military might is not by any means limited to regional conflicts.A subtext of the message, this one more directly aimed at the US, is that while the US may choose to use Tomahawk missiles against Syria and deploy the “mother of all bombs” against terrorists in Afghanistan, Russia too, has the capability to rally its military might and reach all over the world.The Russians have argued that, in the US air-strike against an air force base in Syria in retaliation for Syrian President Bashar Assad’s use of sarin gas on civilians, the US violated international law. They are further arguing that the bombing will have no impact on the larger picture. In a joint press conference with the foreign ministers of both Iran and Syria, Russian Foreign Minister Sergei Lavrov said: “Attempts of this kind will never be a success. It will never happen.”He said: “We demand that the United States should respect the sovereignty of a state and avoid such actions that threaten the current world order.”Putin is playing a game of cat and mouse.He is almost hoping that the US will take the bait just as the Turks did when Turkey shot down a Russian bomber last year, torpedoing relations between the nations. Pragmatically, however, he knows better. The US did not take the bait this time just like it did not take the bait when the Russians repeatedly buzzed the US destroyer USS Porter in the Black Sea and Persian Gulf.Putin seems to be enjoying this game. He similarly probed along the border of Japanese airspace in April. And much closer to home, the Russian spy ship Viktor Leonov has recently been spotted – not once but twice – off the US coast.Russia is sitting in a position of power. It invaded Crimea and major parts of Ukraine and most of the world remained quiet. It entered the conflict in Syria and the Middle East and is building an infrastructure in Syria that is focused on the long term. Putin is a seasoned world leader. The new US administration is still finding its sea legs.The Trump administration has taken umbrage at Russia’s actions and initiatives and said that Russia should return Crimea and exit Ukraine. It has reacted very differently to world events than did previous US administrations and Putin is sending a message back – one that he is not willing to send in face-to-face conversations or through subtle back-door messengers, to President Donald Trump.This is another way of Putin saying “no way” to the US. It is a loud and defiant “nyet.”It is an important warning from Russia.It is also a classic example of Putin’s arrogance.It is no secret that Russia does not want to confront the United States – Putin just wants to have at little fun at its expense.Putin likes toying with other countries.These taunts are another of the games that Russia is playing. Military cat-and-mouse is certainly a more controlled game than Russian Roulette.The author is a columnist and a social and political commentator.