For the sake of strategic containment, regional stability and Israeli-Palestinian peace, it is imperative the Islamic Revolutionary Guard Corps is not permitted to establish a military foothold. 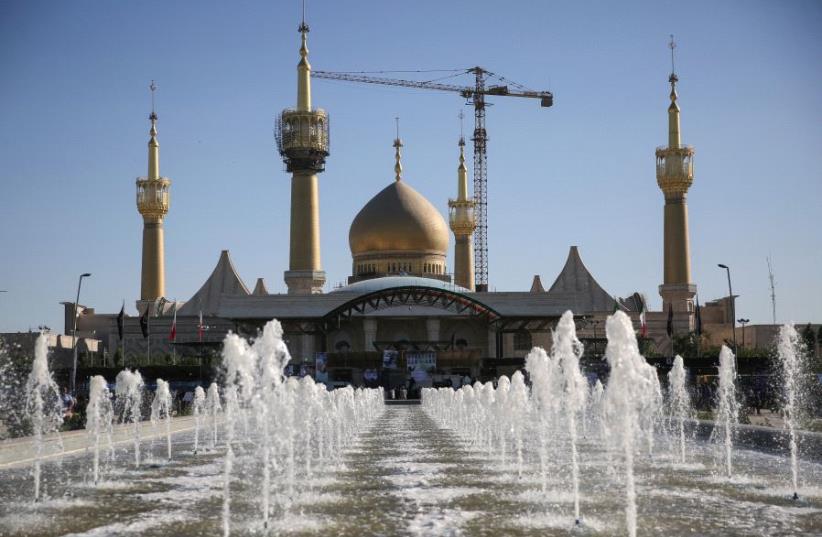 The mausoleum of the founder of the Islamic Republic Ayatollah Ruhollah Khomeini in Tehran, Iran
(photo credit: REUTERS)
Advertisement
The Islamic Revolutionary Guard Corps (IRGC) looks set to re-enter the Palestinian arena, establishing yet another front in its programme of regional power projection.The decision by the Saudi-led bloc of Gulf states and Egypt to sever ties with Qatar emerged from a renewed alliance under American leadership to battle Iranian meddling and to materially diminish insurgent Sunni Islamist groups.Last week, Saudi Arabia's Foreign Minister, Adel al-Jubeir, urged Qatar to terminate its funding of the Hamas regime in Gaza and the Muslim Brotherhood in Egypt. Doha’s eviction of Hamas officials also deprives the Palestinian group of Arab political sponsorship, disrupting its strategic orientation. The impending exit of Qatar from Gaza, however, super-charges an opportunity for Iran to recraft its relationship with Hamas.The heightened proximity between Iran and Hamas is a medium-term development. In May 2017, the London-based Asharq al-Awsat reported that a deal - coordinated by the IRGC and Hezbollah - was reached in principle to restore Tehran’s financial support for the Hamas government. This would end the protracted tensions which emerged after Hamas backed the opposition to the Assad regime in 2012. Though in January 2016 a leaked telephone conversation from Hamas’ former deputy head, Moussa Abu Marzouk, suggested the group’s political wing had received no assistance from Iran since 2009. Nevertheless, accurate funding statistics remain ambiguous.Central to this renewed fraternity has been the election of Ismail Haniyeh as the director of Hamas’ political bureau. Indeed, Asharq al-Awsat reported in September 2016 that Iran actively sought the election of Haniyeh against Marzouk. The Islamic Republic’s factional preferences appear to transcend its enmities with the Palestinian Authority, extending within the Hamas movement itself. On May 29 Ali Larijani, head of the Iranian Islamic Consultative Assembly, congratulated Haniyeh. This was preceded by warm felicitations from Iranian Foreign Minister Mohammad Javad Zarif and General Qasem Soleimani, the commander of the IRGC’s foreign expeditionary Quds Force.In this context of improving Hamas-Iran relations and the Palestinian Authority's sanctions against Gaza, President Donald Trump’s public denunciation of Hamas as a terrorist organisation at the Riyadh Summit further incentivises rapprochement with Tehran, potentially transforming the organisation once again into an Iranian proxy.Iran’s likely re-entry into the Palestinian arena should be considered alongside its interventions across the Levant. The contiguous territorial corridor Iran is developing from Tehran to Beirut features a concentration of IRGC-backed militias on Israel’s northern border in the Syrian Golan. As Seth Frantzman has reported, the recent advances of Iran-backed Shia militias known as the Hashd al-Shaabi, or Popular Mobilisation Units, on the Syria-Iraq border solidify this military reality and enhance Iran’s strategic manoeuvrability. Hamas could emerge as a potent unit in Iran’s efforts to encircle the Jewish state and upset American and Gulf efforts to broker a peace deal between Israel and the Palestinian Authority. Indeed, Soleimani’s message to Haniyeh welcomed Hamas’ partnership in the ‘resistance axis’.This security development is also politically significant. A rapprochement with Iran would upset Hamas’ ties with Egypt. Indeed, the Hamas Gaza chief, Yahya Sinwar, was summoned to meet the heads of Egyptian Intelligence in Cairo on June 4. But assuming Iran could compensate Gaza’s rulers for a diplomatic fallout with Egypt, the new alliance would likely harden the group’s political positions (as it did during the Second Intifada), where Qatar had previously served as a moderating force. The shift in political positions that would accompany membership of the Iranian axis would also challenge recent amendments to the group’s charter.Unlike Qatar, moreover, Iran’s sponsorship of terrorist groups faces few external constraints due to its relative financial and political isolation. As Suzanne Maloney from the Brookings Institution has observed, Iran’s support for terrorist groups such as Hezbollah or sectarian militias in Iraq-Syria has never been driven primarily or even substantially by resource availability. An enduring Iranian commitment could politically entrench a radical Hamas position. In turn, this could bolster Hamas’ ambitions to usurp the authority of the PLO.Secondly, a new engagement with Palestinian politics would have implications for Iran’s regional status. Renewed sponsorship of Sunni Islamists would enable the Islamic Republic to revive its pre-Arab Spring, cross-sectarian agenda against Israel, shifting Islamic international attention away from its current Shia proxy operations. Filling the void created by the departure of Arab states, Iranian support for the Palestinian resistance could authenticate and legitimise its damaging revolutionary export.Iran’s manipulations are connected to the IRGC’s financial ascendancy in the aftermath of the Joint Comprehensive Plan of Action with the P5+1. The ‘re-elected’ President Rouhani’s 2017-2018 budget allocated $7.4 billion to the IRGC. This amounts to 53 per cent of the overall defence budget and constitutes a 24 per cent increase on the 2016-2017 defence budget which had already grown by 90 per cent on the previous year. The latest funding package was accompanied by a new five-year development plan to allocate at least 5 per cent of government spending to the military (particularly missile production which is controlled by the IRGC), enhancing the institution’s stranglehold over military and foreign policy-making.In the aftermath of his victory, Rouhani said the strength of the IRGC is ‘a guarantee for peace and stability in the region [and] the well-being of our people’. Against this backdrop of proliferating Iranian interference, the platitudes of the European Union’s Foreign Affairs High Representative, Federica Mogherini, about Rouhani’s alleged commitment to ‘regional peace’ ring hollow.For the sake of strategic containment, regional stability and Israeli-Palestinian peace, it is imperative the Islamic Revolutionary Guard Corps is not permitted to establish a military foothold in this especially sensitive arena.Sapan Maini-Thompson is a postgraduate at the London School of Economics and Political Science. He previously graduated from Oxford University. You can follow him @SapanMaini.