Is Syria Trump’s ‘what you see from here, you don’t see from there’ moment? 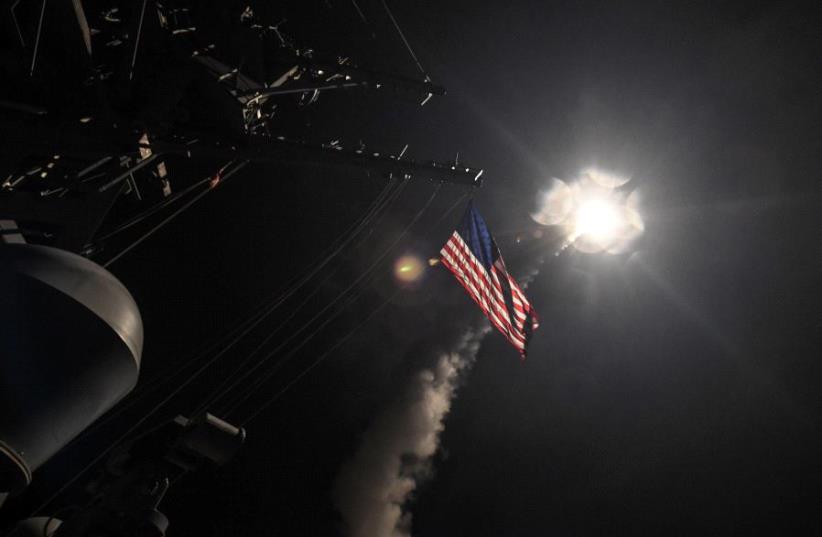 US Navy guided-missile destroyer USS Porter (DDG 78) conducts strike operations while in the Mediterranean Sea
(photo credit: REUTERS)
Advertisement
The 59 Tomahawk missiles launched by US President Donald Trump at Syria’s al-Shayrat airbase have shattered any number of preconceived ideas about the new American president and underscored that the only thing predictable about this latest occupant of the White House is his unpredictability.It was only at the end of last month that US Ambassador to the United Nations Nikki Haley told a group of reporters that “You pick and choose your battles and when we’re looking at this, it’s about changing up priorities and our priority is no longer to sit there and focus on getting [Syrian President Bashar] Assad out.”A week later, following the chemical attack in Idlib, Trump completely changed his tune: “I will tell you that attack on children yesterday had a big impact on me – big impact. My attitude toward Syria and Assad has changed very much... You’re now talking about a whole different level.”This is a president who brings inconsistency in his foreign policy worldview to record-breaking levels. When president Barack Obama was faced with how to react after the Assad regime deployed Sarin gas in Ghouta in August 2013, Trump was very clear in his opposition to attacking Syria in response.“What will we get for bombing Syria besides more debt and a possible longterm conflict?” he tweeted. Trump also insisted (inevitably, in another tweet), “The President must get Congressional approval before attacking Syria – big mistake if he does not.”Back then, Obama was forced to step back from attacking Syria after realizing he would not receive such approval for the air-strikes, a failure to act that severely damaged the prestige of Obama’s presidency and convinced the Assad regime that it could continue to massacre its own citizens with impunity.With remarkable effrontery, Trump has ignored his previous stance on the dangers of becoming enmeshed in the Syrian conflict and, less than 100 days into his presidency, dizzyingly reversed his campaign promise to concentrate on putting America first and not being the world’s policeman.Which is why although Prime Minister Benjamin Netanyahu rightly welcomed Trump’s response to Assad’s use of chemical weapons, there will be some concern in Jerusalem that Trump is about to become a new and even more radical embodiment of former prime minister Ariel Sharon’s statement that “what you see from here, you don’t see from there.”Sharon used this line to explain his move from being one of Israel’s most hawkish cabinet ministers and the major patron of the settlement movement to the man who decided to pull Israel out of the Gaza Strip and limit settlement growth. We might soon see Trump tweeting out a similar statement as he seeks to explain why he may not be the savior the Israeli Right had originally pegged him out to be.On the campaign trail, Trump emphatically promised: “We will move the American embassy to the eternal capital of the Jewish people, Jerusalem.” In reality, as Vice President Mike Pence told the annual AIPAC policy conference in Washington last month, Trump today is only giving “serious consideration” to moving the United States embassy from Tel Aviv to Jerusalem.Moreover, despite Netanyahu lavishly praising Trump – “there is no greater supporter of the Jewish people and the Jewish state than President Donald Trump” – at their recent White House meeting, the fact remains that Netanyahu then failed to reach an agreement with White House envoy Jason Greenblatt over Israeli settlement activity.This failure led to the most right-wing government in Israel’s history unilaterally deciding to restrict construction in West Bank settlements so as to paper over the cracks with the Trump administration on this issue.Not only should Netanyahu be concerned by Trump’s unpredictability, he should also pay attention to the US president’s emotional reaction to horrific events. In his reasoning for launching America’s first strike against the Assad regime, Trump specifically called out the death of children in the chemical attack: “Even beautiful babies were cruelly murdered. No child of God should ever suffer such horror.”This reference recalls the era of a previous US Republican president, Ronald Reagan, who despite being seen by Israelis as a welcome change to Jimmy Carter also proved challenging to Israel’s right-wing government of the time, headed by Menachem Begin. During the First Lebanon War, Reagan kept a picture on his desk of a Lebanese baby wounded by Israeli bombing and even told then foreign minister Yitzhak Shamir in a meeting and Begin by letter that this picture “had become the symbol of the war.”Those Israelis who thought Trump’s election victory was about to give them a free hand to execute their annexationist agenda or launch a full-out offensive against Hamas in the Gaza Strip should begin to reassess their certainties about a US president who is far from predictable or consistent.The writer is a former editor-in-chief of The Jerusalem Post.