Netanyahu’s lack of perspective as to what is truly important for Israel’s interests is seriously worrisome on the eve of a first White House visit to a new president. 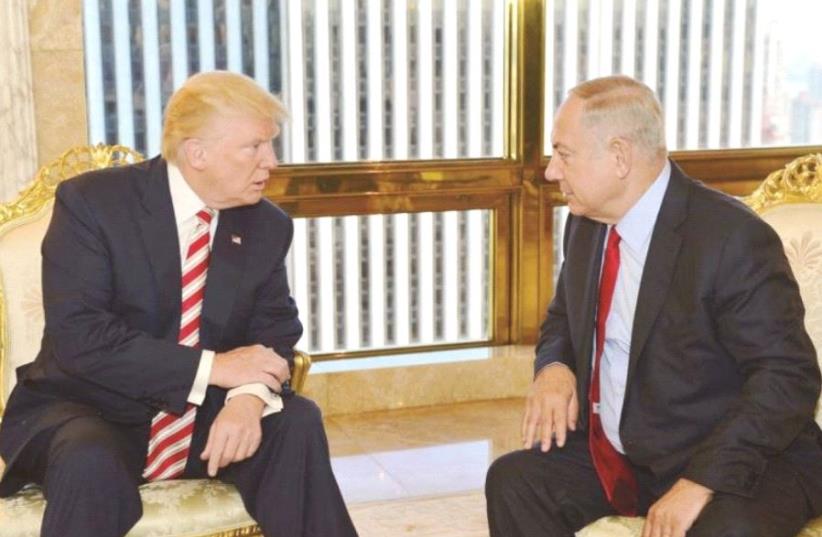 Donald Trump and Benjamin Netanyahu
(photo credit: KOBI GIDEON/GPO)
Advertisement
US President Donald Trump and Prime Minister Binyamin Netanyahu will have no problem making agreeable small talk during their Oval Office meeting on Wednesday. The press? Totally biased! The judiciary? Out of touch elitists! Walls? Can’t build enough of them! Vladimir Putin? What a guy, knows how to treat the opposition! Twitter? Who needs detailed policies when 140 characters will do! But once the small talk is over, there is no guarantee the two men will continue to agree on absolutely everything, which is where their much-touted great friendship might begin to flounder. After all, when it comes to establishing strong personal relationships with American presidents, our prime minister does not have a good track record, with both presidents Clinton and Obama loathing him.Of course both Clinton and Obama were Democrats, with a starkly different worldview to that of Netanyahu, but we’ve already seen that Trump is quick to take offense at the slightest criticism. It’s hard to believe that were Netanyahu to behave in a similarly arrogant way with Trump as he did with Obama (egregiously dabbling in internal US politics with his 2015 speech to Congress attacking the Iran deal), Trump would be as magnanimous as Obama, and still reward Jerusalem with the largest aid package in American history.As Israel’s relations with Europe – Israel’s largest trading partner by far – enter a downward spiral, Jerusalem will become ever more reliant on Washington. This is not a great place to be when “capricious” seems to be the most polite way to describe the new resident of the White House.This is particularly the case following last week’s passing of the Regulations Law that retroactively legalizes settler homes built on private Palestinian land, or, in other words, legitimizes theft. As opponents to the law warned, its passage has severely damaged Israel’s international reputation.The European Union has already postponed a planned summit with Israel scheduled for the end of the month, which was meant to signify a thaw in Israel-EU relations.And even more telling, the German government, which is normally incredibly cautious about criticizing Israel, issued a Foreign Ministry statement saying: “Our trust in the Israeli government’s commitment to the two-state solution has been fundamentally shaken.”But instead of launching a charm offensive to dampen down European fears as to Israel’s intentions, Netanyahu bizarrely decided to focus instead on admonishing European governments for their support of a small Israeli left-wing group, Breaking the Silence, which is made up of ex-IDF veterans who report on alleged IDF human rights abuses in the West Bank.In his Downing Street meeting with British Prime Minister Theresa May a week ago, Netanyahu wasted precious minutes of the conversation by calling on her to stop UK funding for the group, even though the last time the British Foreign Office gave the organization any money was five years ago.Later last week, Netanyahu then had the Belgian ambassador to Israel, Olivier Belle, hauled into to the Foreign Ministry for a dressing down. Belgium’s crime: during his recent visit to Israel, Belgian Prime Minister Charles Michel had the temerity to meet with representatives of Breaking the Silence and B’Tselem, another Israeli human rights group. Quelle horreur.Netanyahu’s lack of perspective as to what is truly important for Israel’s interests is seriously worrisome on the eve of a first White House visit to a new president. Those on Israel’s right wing could hardly restrain their joy after Trump’s electoral victory, but the prime minister will be making a big mistake if he thinks he has Trump in his pocket.In a fascinating weekend interview in the Netanyahu free sheet Israel Hayom, Trump was far from automatically supporting all that the Israeli Right holds dear. Although the interview was headlined “I won’t condemn Israel, it’s been through enough,” Trump conspicuously failed to provide the sound bites which would assure a happy meeting of the minds with Netanyahu.After having said he would like to see a peace deal between Israel and the Palestinians, and thinks one can be made – something the prime minister has been more than vague about recently – Trump was asked about settlements. His answer could have come straight from the mouth of Obama: “They [settlements] don’t help the process.I can say that. There is so much land left. And every time you take land for settlements, there is less land left... I am not somebody that believes that going forward with these settlements is a good thing for peace.”Moving the US embassy to Jerusalem? “The embassy is not an easy decision. It has obviously been out there for many, many years, and nobody has wanted to make that decision. I’m thinking about it very seriously, and we will see what happens.” Or, to paraphrase, don’t hold your breath.Netanyahu shouldn’t take Trump for granted.The writer is a former editor-in-chief of The Jerusalem Post.