Reducing ISIS terrorist attacks in Europe: Is it possible, and if so, at what cost?

After the Rouen attack, Hollande stated that it was a declaration of war by ISIS against France. 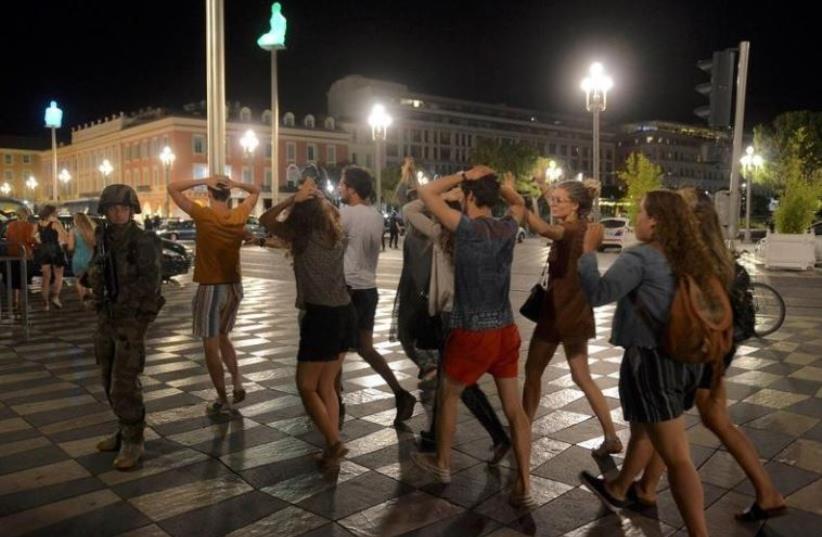 People cross the street with their hands on thier heads as a French soldier secures the area July 15, 2016 after at least 60 people were killed along the Promenade des Anglais in Nice, France, when a truck ran into a crowd celebrating the Bastille Day national holiday July 14.
(photo credit: REUTERS/JEAN-PIERRE AMET)
Advertisement
The wave of terrorist attacks in Western Europe (Germany and France) this July have raised and intensified what is known as “the democratic dilemma.” This series of attacks concluded with the Rouen attack, in which two men who had sworn allegiance to Islamic State (ISIS) killed a priest after holding him hostage along with several nuns. This attack can be described as an “escalation,” as it targeted not only Western-democratic values in general, but Christianity in particular.Earlier this month in Nice, more than 80 people were killed and over 100 wounded when they were run over by a man who had sworn allegiance to ISIS amid Bastille Day celebrations. Germany has also suffered from attacks in its territory, two of which were definitely undertaken by Muslim extremists: a stabbing on a train in the city of Würzburg by a man shouting “Allahu akbar!” in which five were wounded, followed a week later by a suicide bomber swearing allegiance to ISIS attacking outside the Ansbach Open music festival, wounding more than a dozen.The “democratic dilemma” entails an essential problem which democratic regimes are faced with: the need to balance the state’s preeminent interest – protecting the security of the state and its citizens – against the commitment to maintain democratic principles in a system of law, most prominently human dignity and civil rights. Democratic societies value both security and liberty, but extremist terrorist groups, such as ISIS, have no qualms about using any means to accomplish their goals. The state must address the following question: should civil rights be sacrificed to fight terrorism more effectively, or must a democratic society make its peace with a certain level of terrorism in order to protect the civil liberties which it prizes so highly? In the State of Israel, which continually deals with the threat of terrorism, citizens have internalized that, no matter how much it displeases human-rights organizations, some civil rights must be sacrificed in the execution of defensive and offensive operations designed to reduce the quantity of terrorist attacks and violent incidents. Thus, for example, in the name of deterrence, security guards are stationed to inspect the bags of those entering public spaces such as malls, universities, train stations, etc. These security guards deter potential terrorists, though this is accomplished at the expense of individual liberty. Similarly, Ben Gurion Airport is considered one of the most secure airports in the world, due to the use of multiple security rings and a reliance on the human factor, not merely the technological, to detect suspicious activity. In offensive operations, Israel demolishes the homes of terrorists’ families, carries out targeted killings and engages in other aggressive tactics.Western European countries are known for their dedicated protection of civil rights, and this dilemma presents a significant challenge for them. Nevertheless, there seems to have been a gradual realization of the true nature of their predicament.For example, Winfried Bausback, Bavaria’s justice minster, posted the following: “Our democratic and free society of laws must strengthen the security apparatus.” Additionally, a French survey carried out by the Institut français d’opinion publique (IFOP) one day after the Nice attack (before the events in Rouen) indicated that the citizens themselves recognize the seriousness of the situation: 81 percent agreed to impose limitations on the traditional French liberal-democratic way of life. In fact, one of the steps now under consideration in France is halting foreign funding of bodies which impinge on national security.Another finding of this survey, which should concern the French government and other Western governments struggling with terror, is that 56% of the French do not believe that President François Hollande and his government have the capacity to properly deal with terrorist threats. We may infer that as terrorist attacks increase, the legitimacy of the government will further deteriorate, possibly leading to its collapse.After the Rouen attack, Hollande stated that it was a declaration of war by ISIS against France.The question is what France and other countries facing terrorist attacks on their homelands will do in order to protect the security of their citizens. To what extent will they agree to impinge on the liberal- democratic lifestyle to which they have become accustomed? To what extent will they consent to sacrificing some of their civil rights? Just as Israelis have recognized the threats against their country, Europeans must do the same: grasping the seriousness of the situation and the fact that they are in a defensive war against extremist terrorist organizations, and then taking harsh steps which may somewhat erode the foundations of democracy. These measures include extended and closer surveillance of suspicious persons seeking asylum, the arrest of family members of suspected terrorists before operations can be carried out, strict security in public areas, and the demolition of the homes of terrorists’ families. Steps such as these and others will make it clear to terrorist organizations and potential lone-wolf attackers that Europe is no longer an arena conducive to terrorist attacks.This will allow Europeans to succeed in reducing the terrorist threat in their homelands.The author is a PhD candidate in military ethics and terrorism at Tel Aviv University.