During these past weeks, we have been reading in the Bible of the revolution of the Hebrews and their miraculous victory. 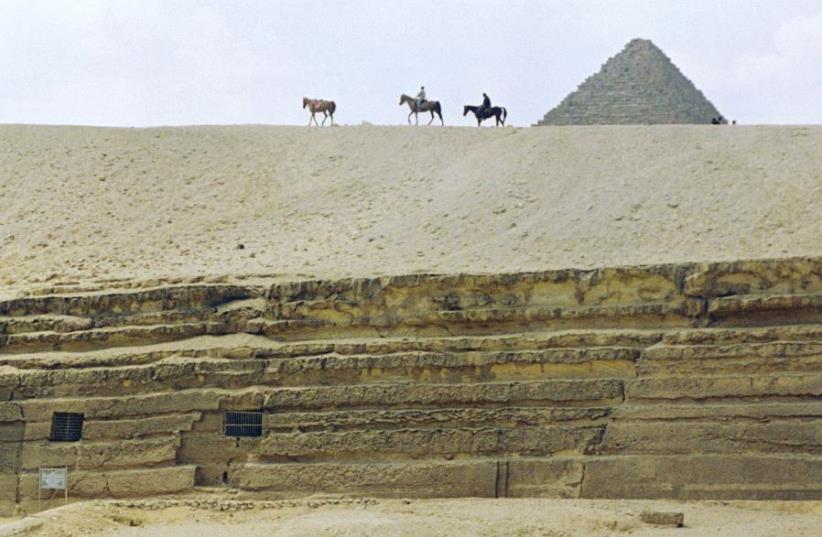 Pyramid in Egypt
(photo credit: REUTERS)
Advertisement
History Professor Leon Shapiro of Rutgers University has often maintained that the overwhelming majority of ground-swell revolutions against repressive government regimes have failed. The most obvious examples are the French Revolution (1789) and the Communist Revolution (1917). In both cases, when the revolutionaries gained political domination, they were more corrupt, repressive and cruel to the inhabitants than had been the establishment governments against which they had rebelled. In effect, therefore, from both a practical and an ideological standpoint the rebels – in adopting the very policies and unethical values of their prior governments – had indeed lost the revolution!During these past weeks, we have been reading in the Bible of the revolution of the Hebrews – erstwhile slaves to the Egyptian Pharaohs – and their miraculous victory, which I was certain could never have gone the way of the subsequent post-revolutionary debacles analyzed by Prof. Shapiro. In the case of the French and Communist revolutions, the victors were certain it was their superior physical power that had been responsible for their success. Hence, it was only natural that they utilized that physical power to ensure the future consolidation of their rule. In the case of Israel, however, our Torah taught us that it was our God and His desire for human freedom, compassionate righteousness and moral justice that had made us victorious (Ex 14:31). And it is God’s Torah that teaches, “You shall not hate the Egyptian since you were strangers in his land” (Deut 23:8), and, “You shall declare liberty throughout the earth for all of its inhabitants” (Lev. 25:10).The fundamental source for the essential, existential freedom and equality of every human being – Hebrew as well as Egyptian – and for the absolute inviolability of every human being – Jew as well as Palestinian (unless one of the two has been found guilty of a heinous crime) – comes at the very beginning of the Bible with the creation of the first human being: “And God created the human being in His image, in the image of God created He him, male and female created He them.” And this view is reiterated by two indisputably great interpreters of Jewish law and theology: Maimonides and Nachmanides – the former in his Mishneh Torah Laws of Servants (chapter 9, law 8), and the latter in his Strictures on Maimonides’ Book of Commandments (commandment 16). Both express the grandeur of biblical humanist universalism. NACHMANIDES CITES the Book of Job (31:15), where the text declares the absolute equality uniting Hebrew master and gentile-slave, since both were formed in the womb of the One Shechina. And Maimonides reaches into the arena of Jewish law for all generations when he single-handedly turns every gentile slave into a Hebrew servant ,as far as his human rights are concerned (Mishneh Torah, ibid.). If this idea represents Jewish truth, how can we possibly understand the silence of many leaders of Religious Zionism in the face of the mounting evidence (but still not proven) that yeshiva high school students were involved in throwing stones against Arab-driven vehicles, and that one of them may have even been responsible for the tragic death of Aisha Rabi, a Palestinian mother of nine?God forbid that this reprehensible act was perpetrated by a religious yeshiva student. And God forbid that Religious-Zionist leadership today would ever accept the legitimacy of the position cited by Rabbi Yitzhak Shapira and Rabbi Yosef Elitzur in their book Torat HaMelekh (5770), which posits a qualitative distinction between the value of the life of a Jew and the value of the life of a gentile – that “according to the 613 commandments there is no status or legitimacy for a gentile today” (p.175), or that gentiles are more similar to animals than to humans (pp. 173-174).  If this position holds any coinage with our leaders of Religious Zionism, then we have missed the major message of Shabbat and our Exodus from Egypt: that the Hebrew free-man and the gentile servant are existentially equal! As our Bible teaches: “Observe the Sabbath day to keep it holy... in order that your gentile man-servant and your gentile maid-servant may rest like you. Remember you were slaves in the land of Egypt and the Lord God took you out from there... therefore did the Lord your God command you to keep the Sabbath day” (Deut 5:12-15). Unless Religious Zionism cries out from the hilltops that Jewish and gentile lives are equally sacred because all humans were created in the image of the Divine, if we ourselves adopt the terroristic ethic of our Palestinian adversaries, then we shall have lost our revolutionary War of Independence no matter how much Israeli land we may have liberated and inhabited! As my revered teacher and mentor Rav Joseph B. Soloveitchik said regarding the question as to whether a Jew can desecrate Shabbat to save the life of a gentile, “If we deny the existential equality of soul indelibly connecting Jew with gentile, we Jews have nothing to say to the gentile world, and we shall have forfeited the mission of the children of Abraham to the world.”The writer is chief rabbi of Efrat, and the founder, chancellor emeritus and rosh hayeshiva of Ohr Torah Stone.