Annan was appointed secretary-general in January 1997 and was reelected in 2001. During this time he carried out a major reform within the UN. 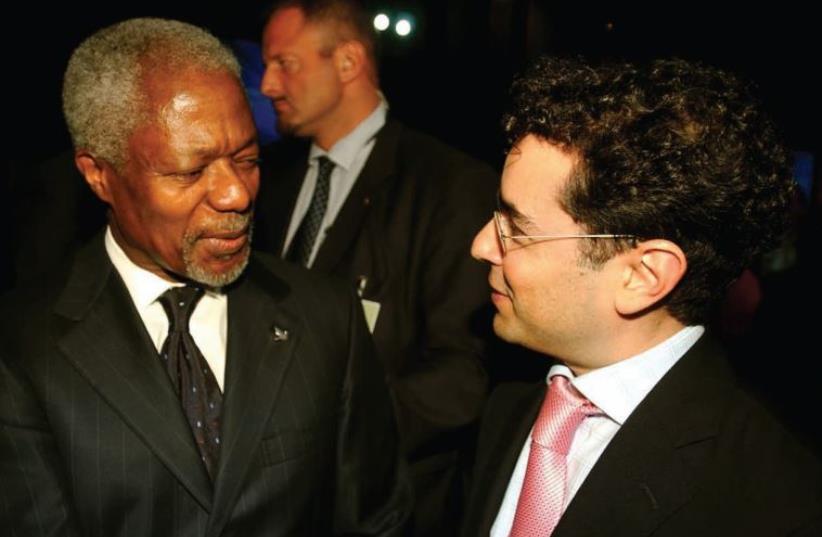 Hillel Neuer with Kofi Annan, UN secretary-general from 1997 to 2006.
(photo credit: Courtesy)
Advertisement
Nobel Peace Prize laureate and former United Nations secretary-general Kofi Annan, who died in Switzerland on Saturday at the age of 80, will be remembered as a friend to Israel in an organization where the country faces extreme bias.In a statement of condolences to Annan’s family, Prime Minister Benjamin Netanyahu said, “We will remember him as having been very active in the international arena and as someone who fought antisemitism and Holocaust denial.”World Jewish Congress president Ronald S. Lauder issued a statement saying Annan “was a dedicated diplomat who throughout his life embodied the mandate of the United Nations to foster relations and cooperation among members of the international community.”UN Watch, an NGO dedicated to monitoring the global body also put out a tribute to Annan, while acknowledging that he had nonetheless also been on the receiving end of its criticism: “UN Watch mourns the loss of Kofi Annan, a revered statesman who will be remembered as the secretary-general who led the move to scrap the UN’s discredited Human Rights Commission, and who was the first UN chief to publicly and repeatedly call for an end to the UN’s obsessive and one-sided targeting of Israel.”The appointment of the Ghanaian-born Annan as UN secretary-general marked the first time the top position went to someone from within the giant organization. Annan started his career in 1962 in Geneva in the World Health Organization.By 1993, he had worked his way up to become deputy secretary-general in charge of UN peacekeeping missions. His term in that job included a period of genocides in Somalia, Rwanda and Bosnia-Herzegovina, leading to criticism that the UN had failed in its primary mission.Annan was appointed secretary-general in January 1997 and was reelected in 2001. During this time he carried out a major reform within the UN. Annan created a new Human Rights Council and, as UN Watch noted, when he saw that it was also pathologically singling out Israel, “he spoke out, expressing the hope that the council would deal with the Middle East issue ‘in an impartial way’ and ‘not allow it to monopolize attention at the expense of others where there are equally grave or even graver violations.’”In 1998, during a trip to Israel that included visits to both Yad Vashem and the Knesset, Annan came under fire for the UN’s perceived one-sidedness. Israel’s impossible position as a member state that did not belong to any regional group objectively prevented it from serving in any of the UN’s main organs such as the Security Council or the Economic and Social Council.Annan recognized this as an “anomaly” and under his leadership, the UN in 2000 included Israel in the Western European and Others Group.One of Annan’s best-remembered moves from Israel’s point of view came in 2005, when the UN established International Holocaust Remembrance Day to be commemorated every January 27, the anniversary of the liberation of Auschwitz.He had a personal connection to the Holocaust. Annan’s widow, Nane, is the daughter of Raoul Wallenberg’s sister, Nina Lagergren. The Swedish diplomat disappeared in 1945, probably at the hands of the Soviets, after using his position to issue certificates of protection that saved thousands of Hungarian Jews from the Nazi death machine.Annan’s calm and pleasant demeanor impressed all those who met him.Perhaps the most unusual Israeli tribute to Annan was made during his lifetime, when a restaurant on Mount Bental on the Golan Heights was named “Cafe Annan,” a play on his name and the Hebrew words for “Coffee in a cloud.”After he left the secretary-general post, Annan continued to be outspoken in his condemnation of the slanted way the UN treated Israel. This was seen in December 2016 in his last major speech on the Middle East, in which he questioned the value of endless UN resolutions against the country.Annan was a principled man of character and a friend of Israel. That he did not succeed in fully rectifying the UN’s bias against Israel does not reflect badly on him as much as demonstrate the depths of the problems within the United Nations.