Remembering Rabin – a call for unity

The ever escalating cycle of hatred and anger between the various factions in Israeli society has become a debilitating disease that goes way beyond political tactics. 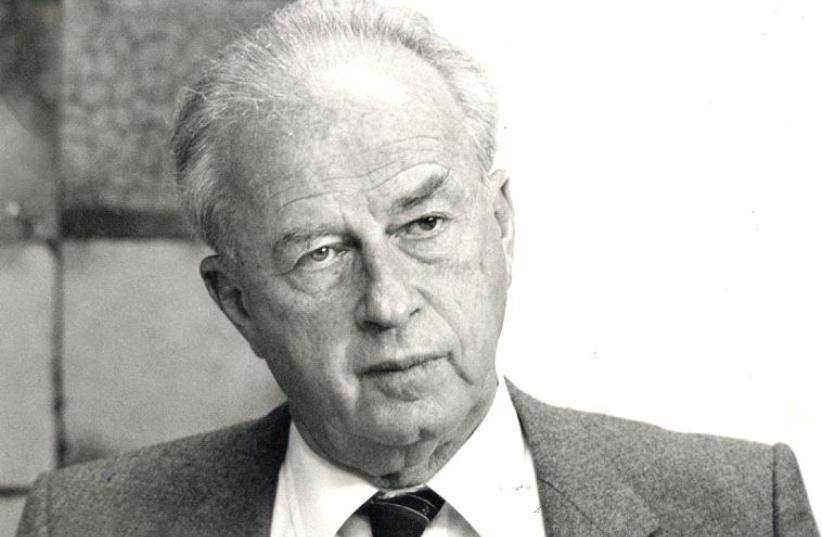 Portrait of Rabin as a defense minister: In 1985
(photo credit: DAVID BRAUNER)
Advertisement
The night Yitzhak Rabin was assassinated was pivotal in Israel’s history; a trio of bullets brought the bitterly controversial Oslo accords to a grinding halt. In the years since, Rabin’s legacy has been commemorated almost exclusively by Israel’s Left. The Right is discomfited by both its opposition to the Oslo accords – on which it places much of the blame for the ensuing terrorist attacks and intifada – and by the guilt, brutally placed at its feet each year anew at the annual rally in Rabin’s honor.So it has transpired that, while Rabin’s legacy remains unaccomplished, the Israel he fought for, and for which he paid the ultimate price to create a less bloody future for, has become increasingly polarized over the very issue of peace, or as the less grandiose and optimistic will have it, two-state solution. The ever escalating cycle of hatred and anger between the various factions in Israeli society has become a debilitating disease that goes way beyond political tactics, directly to the heart of our ability to function as a nation. While we are increasingly cognizant and sophisticated vis a vis our surrounding security threats, our ability to find common ground is wearing dangerously thin.Unity makes a great soundbite. Achieving it is hard, grueling work; people whose entire life’s work and ideology hang in the balance of a land-for-peace agreement cannot be expected to sit back and enjoy the view when such a possibility threatens to become a reality. Conversely, those of us who are sure the best, and probably the only, way to ensure a long-term Jewish majority for the State of Israel is secession from land we never annexed should not be expected to stand by while Israel tries to do exactly that. What unites these opposing groups is the recognition that 70 years of hard-earned Jewish sovereignty must not be endangered.In a similar vein, the battles being waged between secular and religious Israelis on various key issues such as Shabbat, conversion and civil marriage – to name a few – represent opposing core values held by diverse groups within Israeli society. And none of these groups are, or should be, going anywhere.As a haredi (ultra-Orthodox) woman and Jerusalemite who was a young teen at the time of the assassination, I am fully aware of the prices that must be paid and obstacles that need overcoming on the way to a more cohesive Israel. It is with careful hope and a respectable amount of trepidation that I approach this year’s Rabin memorial under the slogan “One Nation.”Secular Tel Aviv is not my home ground and yet this year I will be a part of the organizing team. In the 22 years that have passed since that terrible night, my politics have evolved from virulently opposed to carefully embracing a two-state solution. But beyond all, I am and will always be an Israeli.Yitzhak Rabin the person will be remembered by his friends and family, his political legacy will be remembered by his party and camp, but his assassination is a matter for all Israelis to concern themselves with.The question still begs an answer as to how such a devastating event could take place. This is not a technical question but a moral and social one and I believe that each and every Israeli – no matter which sector we belong to – are obligated to address, especially at this time.To paraphrase Winston Churchill’s famous phrase in his first speech to the house of commons on May 13, 1940: the unity we are offering Israel now is sweaty, bloody and tear-stained. Nevertheless, it is the only way for all of us – and especially our children – to have any kind of future in this land.The writer is the haredi coordinator for Darkenu and a board member of the municipal Yerushalmim Party.