Right From Wrong: A sorely needed change in climate

Such is the method to the madness of intersectionality, according to which all extreme liberal positions are interconnected and live under one large umbrella of malcontent. 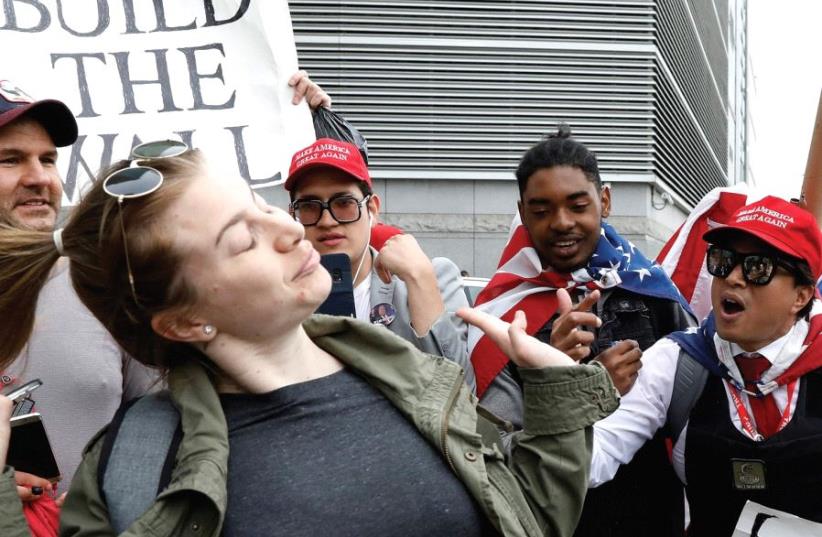 AN ANTI-TRUMP demonstrator interacts with pro-Trump supporters near the Intrepid Sea, Air & Space Museum in New York ahead of an expected visit by the president earlier this month
(photo credit: REUTERS)
Advertisement
Last weekend, during a visit to Washington, DC, I was nearly knocked down by a mob of demonstrators. Had they known I was attempting to cross through the marching throng to make it to an appointment in the lobby of the Trump International Hotel, I likely would have been lynched.As bad luck would have it, guards at the barricade separating the crowds on Pennsylvania Avenue from the hotel would not let me through for understandable security reasons. So, after phoning the person I was supposed to meet for drinks in the majestically refurbished Old Post Office building to suggest a different venue, I was forced to slither my way back again without getting trampled on by poster-wielding protesters sweating profusely in the afternoon sun.This was no easy feat, particularly since each segment of the tens of thousands of people expressing their ire over “climate change” – the social cause whose name was changed from “global warming” when freezing temperatures made the term as laughable as the phenomenon itself – booed loudly as they passed by the hotel.“No Trump, no KKK, no fascist USA,” many chanted, pushing babies in strollers, carrying toddlers on shoulders or simply walking alongside friends, proud of themselves for being seen and heard by like-minded left-wingers bent on rescuing the planet from destruction at the hands of human beings with differing views. This did not prevent dozens of them from entering nearby air-conditioned restaurants to escape the heat and enjoy some pricey food generated by the very corporations “guilty” of inflicting tsunamis and other unforgiving acts of nature on the world. Oops. I forgot for a moment that the word “nature” is forbidden in the United States these days, as it connotes a belief in the innateness of things like gender.YET, WHILE talking about “nature” is a no-no among enlightened Americans, “science” is all the rage. This was also evident at the rally, many of whose participants waved placards denouncing those who do not support spending billions on climate-change research and rectification as “anti-science.” This despite the tens of thousands of physicists and physical chemists who have debunked claims by the climate-change fanatics.In any case, what the storm on Pennsylvania had to do with President Trump, the Klu Klux Klan or fascism was not made clear. Such is the method to the madness of intersectionality, according to which all extreme liberal positions are interconnected and live under one large umbrella of malcontent. The fact that these stances often run counter to one another does not seem to bother their adherents.Which brings me back to the masses I had to dodge while searching for a place to sit down with a colleague. In their midst, I was reminded of a preoccupation one of my children had years ago with what he believed was an imminent invasion of extra-terrestrials. Yes, my son, who was born and raised in Israel, a tiny country surrounded by visible enemies he encountered daily and would eventually have to confront on the battlefield, could not get his mind off an imaginary entity that ostensibly threatened to imperil his existence on earth.The adults who marched on Washington last Saturday exhibited a similar form of denial. Clearly, a disputed phenomenon millions of years in the future is easier for them to deal with than the very real and concrete present dangers facing the country and globe they purport to cherish.It is this type of climate that sorely needs to change.The writer is an editor at The Gatestone Institute.