Right from wrong: Christmas greetings from Netanyahu and Abbas 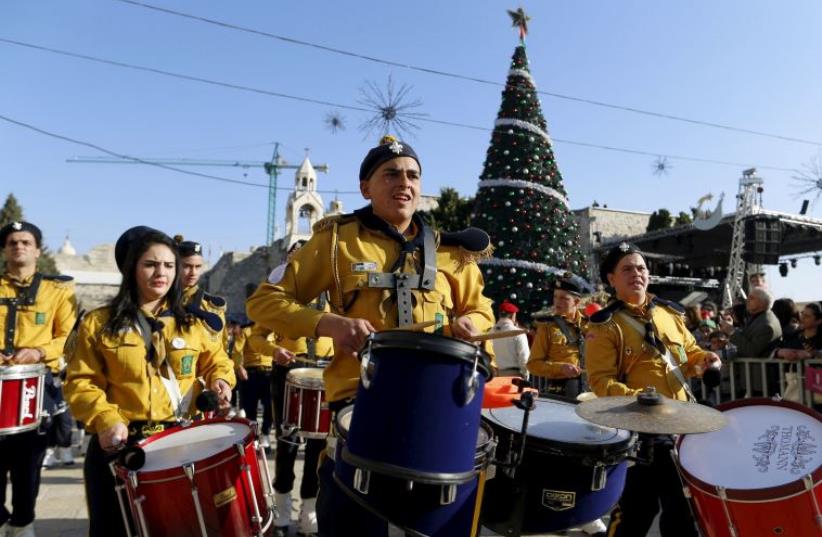 A Palestinian marching band parades during a Christmas procession at Manger Square in the West Bank town of Bethlehem
(photo credit: REUTERS)
Advertisement
Prime Minister Benjamin Netanyahu and Palestinian Authority President Mahmoud Abbas extended Christmas greetings to the world on Thursday.Because both leaders operate in the Middle East and neither is Christian, their respective messages are particularly worthy of note.Netanyahu began his address by mentioning the festivity of the holiday, calling it a “special opportunity to spend time with loved ones.” He continued by expressing empathy for those less fortunate Christians who are “experiencing violence, persecution and fear” in every part of the region except the Jewish state, where “religious freedom is a sacred principle,” and “Christian citizens enjoy the full blessings of freedom and democracy, their equal rights enshrined in Israeli law.”He ended by saying, “Let us remember the common heritage and values that unite us in the face of extremism and hatred, which we will never accept. From Jerusalem, the eternal capital of the Jewish people, the city of peace, I join Christians everywhere, and especially those in the Middle East, in a common prayer for a more peaceful and tolerant world.”Abbas opened his own message by appropriating the Christian savior.“It is a divine blessing that this year we are coincidentally celebrating the birth of Jesus and the birth of Prophet Muhammad, peace be upon them, for the first time in centuries,” he said. “On this day, billions around the world celebrate the birth of two great messengers of love, hope, justice and peace.” Jesus, Abbas asserted, “is a symbol for all Palestinians. Palestine and its people take pride in being the birthplace of Christianity and having the oldest Christian community in the world.”The Muslim leader then proceeded to bash the Jewish state.“In Bethlehem this year, Palestinians will celebrate Christmas surrounded by 18 illegal settlements and an annexation wall, which are taking over their land,” he said. “Over the past few months, we have seen how the Israeli government has continued to consolidate an Apartheid regime by accelerating policies which destroy the two-state solution.”To add to the Christmas spirit of “love, hope, justice and peace,” Abbas legitimized what has come to be known as the “knife intifada” – the wave of daily stabbing attacks against innocent Israelis.“Palestinians continue to defy the daily oppression imposed by their occupier with steadfastness and love for their country,” he said.Continuing his rant, Abbas pointed proudly to the “landmark agreement between the Holy See and the State of Palestine”; the “churches around the world supporting the call for recognition of the State of Palestine”; “an increasing number of Christian groups campaigning to divest from companies that profit from the Israeli occupation of our land”; the “Several parliaments [that] have recommended their governments recognize the State of Palestine, including most recently the parliament of Greece”; and the raising of “our flag at the United Nations.”Abbas went on to acknowledge that “this Christmas comes during a particularly difficult period.” But it turns out he wasn’t referring to the plight of Christians, who are being tortured, maimed, raped, sold into slavery, forced to convert to Islam and slaughtered across the Middle East and Africa. No, the “difficult period” he had in mind is one “when international intervention is desperately needed to protect the Palestinian people. Extremist Israeli settlers continue to attack Palestinians, including their mosques and churches, through acts of vandalism and terror.”His lies did not stop there.“Millions of Palestinians, as well as Christian and Muslim Arabs from the rest of the region, are not allowed to visit Jerusalem due to the Israeli occupation,” he said. “There can be no Palestinian State without East Jerusalem as its capital, reunited with Bethlehem and the rest of Palestine.”To add weight to his frontal assault, Abbas condemned “Daesh” – the Arabic word for Islamic State (IS) – by comparing it to Israel.“We express our solidarity with the peoples who have been affected by their evil actions,” he said.“The use of any religion for political purposes is absolutely unacceptable and must be fought. Within the Palestinian context, we call upon the international community to stop Israeli attempts at turning a difficult but solvable political issue into an impossible religious war.”While Netanyahu signed off his statement with “Merry Christmas and a happy new year,” Abbas concluded his own by reiterating: “Once again, we pray for the end of occupation and Apartheid in order to resurrect justice in our Holy Country. Ending decades of exile and oppression is a must in order to bring peace to our region. On the Holy Occasion of Christmas, I salute all Palestinians wherever they are, hoping for the day that they will be able to live, worship and be free in their homeland.”This select piece of self-serving belligerence tells you everything you need to know about why terms like “two-state solution” are a bad joke. It is not a demography issue or a matter of divvying up land.Nor does the ridiculous question of whether Abbas is a viable “partner” for negotiations with Netanyahu need asking. Everyone knows the answer, even those pretending otherwise.Not only is the Palestinian entity a cog in the global Islamist machine, whose aims are hegemonic power, not peace with anyone, least of all Israel. But Abbas specifically has everything to lose by achieving actual statehood. It is the struggle itself that keeps him in business. It is the promotion of “martyrdom” in his society that gives him any sliver of internal clout, and prevents him from being dumped into the dustbin of history by the rest of the radical Muslim world.But don’t take my word for it. Just hearken to his “Christmas” blessings.The writer is the web editor of The Algemeiner (algemeiner.com) and a columnist at Israel Hayom.