Israel’s moral compass is in no need of adjustment. 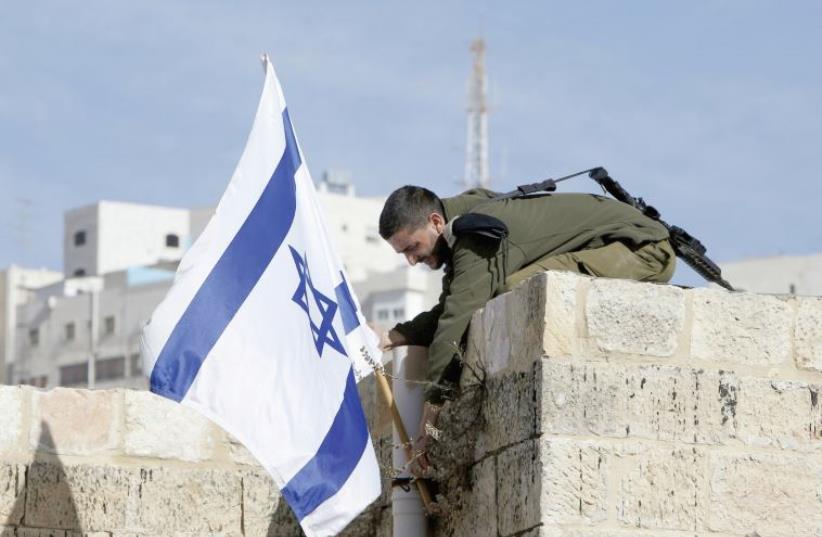 A SOLDIER holds a flag atop a house in Hebron.
(photo credit: REUTERS)
Advertisement
Defense Minister Moshe Ya’alon has one of the most coveted portfolios in the government, but lately he seems to be vying for a different role – that which involves the upholding of the country’s morals.This is pretty funny, considering that the Jewish state is under constant attack from regional enemies armed to the teeth and filled with hate, in addition to more geographically distant foes fighting a battle of delegitimization. But it is not the least bit amusing that he chose Remembrance Day – at the gravesite of dead Jewish soldiers and civilians, no less – to reiterate his concern about the ethical character of the Israeli populace.It was a peculiar eulogy, to say the least, particularly coming from the person in charge of the military.“Over the past several months, Israel has been confronted with a wave of Palestinian terrorism, which indeed has been on a down-slide of late, but is liable to erupt anew,” Ya’alon said to a massive crowd of mourners at the Kiryat Shaul Cemetery in Tel Aviv. “Even during the difficult moments, in which our blood boils and our rage is high, woe to us if we lose our way and our values, the compromising of which would likely bring Israel to the abyss.”Lose our way? Compromise our values? Was he joking? Sadly – and inexplicably – the answer is no, though Ya’alon of all people should know that it is not our “way” or “values” that have been “lost” or “compromised,” but rather our lives. And if anything brings Israel to the brink of the abyss, it will be an Iranian nuclear bomb.“Exercise force when necessary, but also understand its limits and its ability to lead to a dulling of the senses,” he continued.“Ensure the purity of arms and retain humanity, and let us not lose our heads.”It seems that Ya’alon is the only one who has lost his head these days, and his mind along with it.This was the third time in so many months that he made a point of warning Israel against moral turpitude.The first was when he promptly denounced Elor Azaria – the IDF soldier under indictment for killing a subdued Palestinian terrorist in Hebron – and members of the public who protested on his behalf. “We’re not Islamic State,” Ya’alon said. “When there’s a need to kill, we kill. But when it’s someone neutralized or with his hands up, that is the place for preserving our moral compass.”The second was on Remembrance Day, when Ya’alon immediately and unequivocally backed IDF deputy chief of staff Yair Golan, who suggested that Israel is coming dangerously close to resembling 1930s Germany and called for an annual day of soul-searching, like some kind of secular version of Yom Kippur.“I have full faith in Golan, a fighter and outstanding commander, high-caliber and praiseworthy,” he said. “The responsibilities of an army officer, especially a senior commander, are not limited to leading soldiers out to war, but also include charting out a path and ethical standards with the help of [his] moral compass.”The last time I checked, it was the job of the minister of defense to protect Israel’s citizenry from its mortal enemies, by developing and carrying out military strategies to defeat them. It is a mighty challenge on today’s battlefield in the Middle East, to be sure, because the warfare involves multiple fronts and various filthy methods of engagement.These include, but are not restricted to, the use of children, both as human shields and as machete-wielding murderers.The jury is still out on whether Ya’alon is up to the gargantuan task. Nor is it clear whether anyone else in his position would handle the current situation any better. But two things are certain. One is that Ya’alon has no business anointing himself supreme judge of Jewish-state ethics. The other is that Israel’s moral compass is in no need of adjustment.

The writer is the managing editor of The Algemeiner.