"First he lied about the role the United States played in advancing UN Resolution 2334, which was adopted by the international body’s Security Council a week ago Friday." 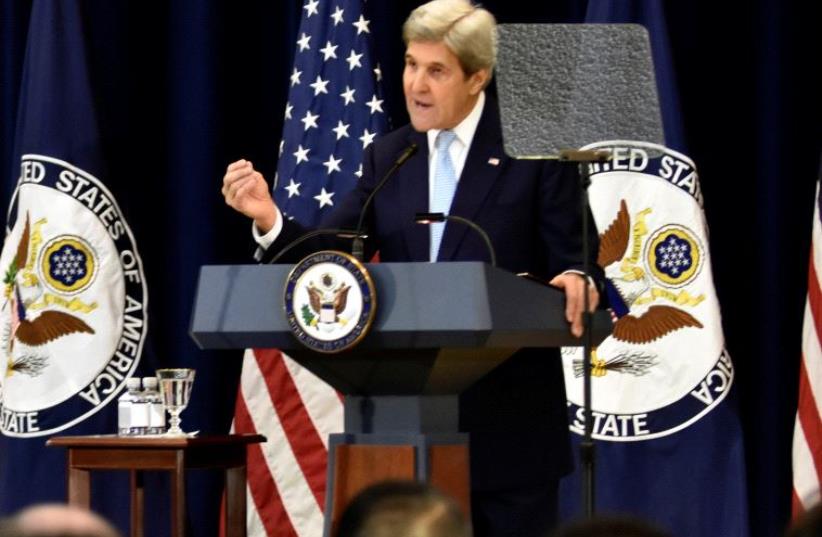 US Secretary of State John Kerry
(photo credit: REUTERS)
Advertisement
In a lengthy speech last Wednesday to lay out his “vision for Middle East peace,” US Secretary of State John Kerry engaged in customary moral turpitude.First he lied about the role the United States played in advancing UN Resolution 2334, which was adopted by the international body’s Security Council a week ago Friday. Then he defended his administration’s decision to abstain in the vote, rather than veto it, by claiming that the move was “in accordance with American values.”He even raised his voice when declaring that the US under President Barack Obama has never permitted the delegitimization of, or boycotts against, Israel – both of which the resolution enables and promotes.Just ask the Palestinians, who not only lauded it in general but stated outright that it paved the way not only for divestment and sanctions, but for lawsuits at the International Criminal Court at The Hague. And they’re right.Far worse was the underlying message of Kerry’s tirade, however: that Jews building apartments in Judea, Samaria and east Jerusalem prevent the Palestinians from being able to believe that Israel is acting in good faith when it says that its ultimate aim is to achieve a two-state solution. More egregious still, he attributed the stalemate in negotiations to wrongdoing on “both sides,” with an emphasis on Israel. Attributing the situation to the “extremist” right-wing government in Jerusalem – as opposed to the terrorist masters in Ramallah and Gaza – he professed great love for Israel, while chastising it for bad behavior. He warned that Israel could not remain both Jewish and democratic without returning to the 1967 borders and sharing its capital with the Palestinian state that would have been established by now had it not been for settlements.This after admitting that settlements aren’t really the key obstacle to a peace treaty.But the most outrageous and telling moment in Kerry’s address was when he said that while Israelis celebrate Independence Day each year, the Palestinians mourn the “Nakba” – the catastrophe of the founding of the Jewish state in 1948. Yes, without blinking an eye, he acknowledged what the Palestinian leadership has been saying all along – that the problem is not the “occupation” of territories that Arab states lost in the 1967 Six Day War, but rather the existence of Jews on any inch of the land, from Metulla to Eilat. This is what Hamas etches in Jewish blood at every opportunity, and what the Fatah honchos in the Palestinian Authority regularly make clear through official political and cultural channels. In other words, though Israel cannot and will not agree to a state along what the late statesman Abba Eban called the “Auschwitz borders,” it doesn’t really matter anyway, because the Palestinians are dreaming not of 1967, but of 1947 – when the Arabs then, too, refused a plan for partition.IT IS for this reason that Israeli Prime Minister Benjamin Netanyahu – in addition to Jewish groups and members of Congress – responded with anger to the words of America’s outgoing top diplomat. Blasting Kerry for “spend[ing] most of his speech blaming Israel for the lack of peace by passionately condemning a policy of enabling Jews to live in their historic homeland and in their eternal capital, Jerusalem,” Netanyahu stressed, “No one wants peace more than the people of Israel.” But, he said, it has to be reached through direct negotiations, not by the imposition of international pressure, terms or conditions. And herein lies the rub: it is precisely because the Palestinian leadership has no interest in actually achieving the statehood that Kerry has spent eight years insisting is necessary for the “dream” of Israeli democracy that it keeps running to the UN. The PA does not want to negotiate a deal with Israel; it wants Israel to be demonized and criminalized by third parties, while it sharpens its knives and revs up its rocket launchers. As the chief negotiator of the disastrous nuclear accord with Iran – a patsy who swallows whole any anti-Western narrative of victimhood that is fed to him – Kerry has been a welcome facilitator.US President-elect Donald Trump has been giving the Jewish state cause for optimism about the near future.“We cannot continue to let Israel be treated with such total disdain and disrespect,” Trump tweeted ahead of Kerry’s speech. “They used to have a great friend in the US, but not anymore. The beginning of the end was the horrible Iran deal, and now this [UN]! Stay strong Israel, January 20th is fast approaching!” The date can’t come fast enough.The writer is managing editor of The Algemeiner.