"If this was Haley’s first hurrah, it won’t take long for her to take her rightful place alongside, if not surpass the achievements of, a handful of predecessors whose mark was indelible." 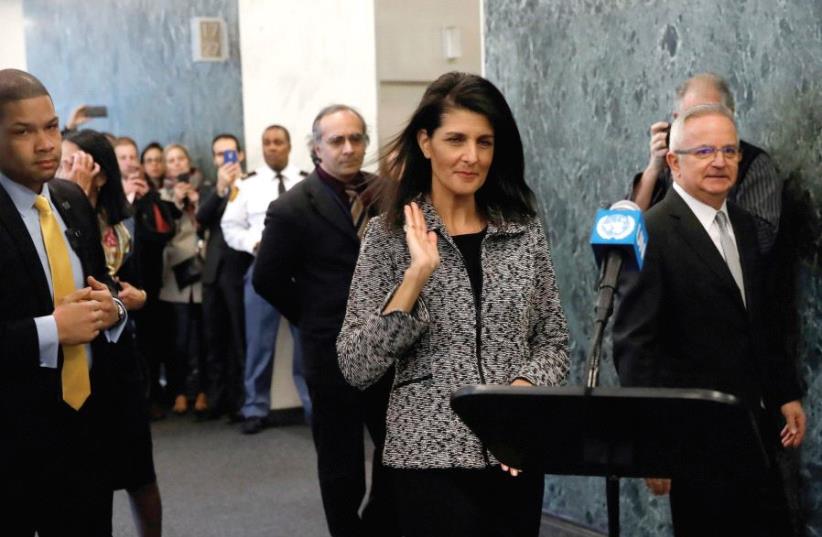 Newly appointed US Ambassador to the United Nations Nikki Haley makes a statement upon her arrival at UN headquarters in New York City
(photo credit: REUTERS)
Advertisement
Four months ago, when then-South Carolina governor Nikki Haley was nominated by the president-elect as US ambassador to the United Nations, I wrote that there was reason to hope she would live up to the legacies of Daniel Patrick Moynihan, Jeanne Kirkpatrick and John Bolton as “shining beacons in the Midtown Manhattan snake pit.”Though at the time I could not judge whether she was the right person for the job, it appeared that she possessed the kind of moral clarity – and tough skin – required in an arena filled with people whose key purpose is to cloud the distinction between good and evil. Indeed, it takes a special kind of envoy to navigate the Orwellian universe in which the international body operates, where Western values are on a lower hierarchical rung than third-world culture. And where a mockery is made of the concept of human rights, the championing and upholding of which the organization was originally established to safeguard.One indicator that Haley seemed to fit the bill was that she, the daughter of Indian immigrants who went through legal channels to become Americans, signed a law to crack down on illegal immigration. Another was her introducing legislation to outlaw boycotts, divestment and sanctions “based on race, color, religion, gender, or national origin of the targeted person or entity.” Since Israel has been the focus of BDS campaigns everywhere, it was clear what she had in mind. No wonder her appointment caused Riyad Mansour, permanent observer of Palestine to the United Nations, to flinch.Mansour was right to be worried, just as I now believe my high hopes were well-founded, when Haley was confirmed.Last Thursday, after her first encounter with the UN Security Council, Ambassador Haley told reporters that she had asked its members to help her understand why, “when we have so much going on in the world, why is it that every single month we’re going to sit down and have a hearing where all they do is obsess over Israel?” Haley went on to describe the meeting, which she called “a bit strange,” as exactly what it was: a forum for bashing the Jewish state.“[T]he discussion was not about Hezbollah’s illegal build-up of rockets in Lebanon,” she said. “It was not about the money and weapons Iran provides to terrorists. It was not about how we defeat ISIS [Islamic State]. It was not about how we hold Bashar al-Assad accountable for the slaughter of hundreds and thousands of civilians. No, instead, the meeting focused on criticizing Israel, the one true democracy in the Middle East.”Asserting that the US “will not turn a blind eye to this anymore,” Haley underscored America’s “ironclad support” for Israel and “intolerance for the UN’s anti-Israel bias.”She pointed to the fact that, “incredibly, the UN Department of Political Affairs has an entire division devoted to Palestinian affairs,” while it has “no division devoted to illegal missile launches from North Korea... no division devoted to the world’s number one state-sponsor of terror, Iran.”The double standards, she said, “are breathtaking,” especially as “Israel exists in a region where others call for its complete destruction, and in a world where antisemitism is on the rise.” This ongoing stance at the UN “is long overdue for change,” she said. “The United States will not hesitate to speak out against these biases in defense of our friend and ally, Israel.”If this was Haley’s first hurrah, it won’t take long for her to take her rightful place alongside, if not surpass the achievements of, a handful of predecessors whose mark was indelible.

The writer is the managing editor of The Algemeiner.
Advertisement
Subscribe for our daily newsletter