It was bad enough when former president Barack Obama took the helm and announced he’d be leading from behind. 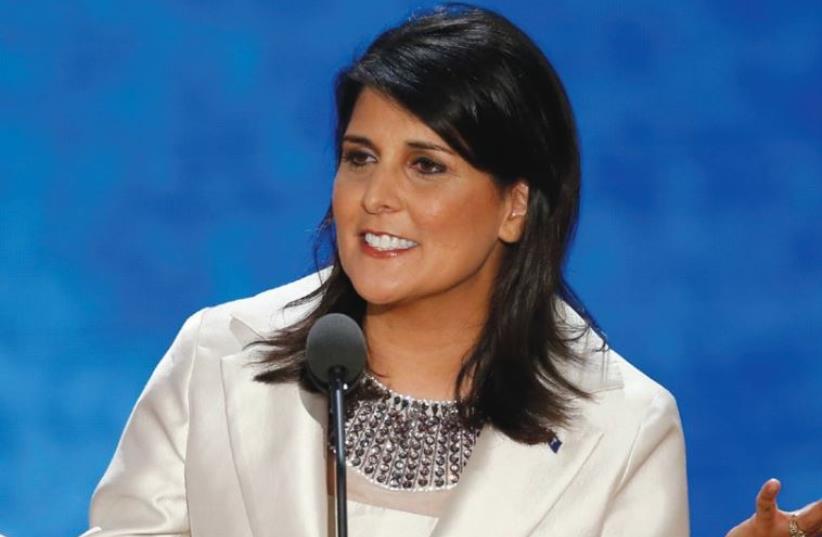 South Carolina Govenor Nikki Haley
(photo credit: REUTERS)
Advertisement
The fierce battles that continue to rage against US President Donald Trump and the new administration in Washington, DC, that is taking shape make it difficult for most people even to hear themselves think, let alone engage in coherent discourse.As someone who is encouraged by Trump’s appointees and policy statements, particularly with regard to Iran but also Islamist terrorism in general, I have been attempting to observe what is going on with private, cautious satisfaction, rather than argue about it publicly with despondent acquaintances.But one thing I can confidently shout from the rooftops is that the character and content of the anti-Trump demonstrations explain perfectly why the real-estate mogul and reality TV star is now occupying the Oval Office. Indeed, what each protest has highlighted, from Hollywood to Harvard, is the lunacy of the Left.So extreme has American culture grown that it has become indistinguishable from parody and caricature.Not a single Republican candidate, among the other 16 whom Trump knocked out in the primaries, came close to conveying the message that he so brazenly – often inarticulately, but without a hint of apology – made his own.Like the famous line in the 1976 black comedy Network — “I’m as mad as hell, and I’m not going to take this anymore!” – Trump’s anti-political correctness credo hit home in a big way with those of us who had reached the breaking point of no return.It was bad enough when former president Barack Obama took the helm and announced he’d be leading from behind. Worse still was when he abandoned moderate Muslims in favor of bloodthirsty radicals. The last straw was his kowtowing to the evil, mullah-led regime in Tehran while preoccupied with causes he considered much more pressing. You know, like climate change and transgender bathrooms.This is but a mere taste of a single dish in a smorgasbord of ill-conceived ideas. Had he and his administration behaved remotely like Democrats of yore, it is possible that Hillary Clinton would be in the White House today. But even if she were not, a seasoned Republican politician might easily have beaten the likes of a businessman with no governing experience.So, all of the weepers and whiners who are trotting around in vagina costumes, waving “free abortion, free Palestine” posters have themselves to thank for what they consider to be their country’s current quagmire.But one need not invoke the most radical provocateurs – who, under the banner of “intersectionality,” hijack every protest – to make the point that things have gotten out of hand. Far more mainstream individuals and groups have also gone off the deep end.Take, for example, an open letter to the newly instated American ambassador to the UN, Nikki Haley, published in Newsweek on Tuesday. The long, eloquent missive, written by former US ambassador to Sweden Azita Raji, is a plea to Haley, the former governor of South Carolina, to stand up against the administration she was appointed to represent at the international body.Raji, who came to the US with her family from Iran when she was 17, appealed to Haley, as the daughter of Punjabi Sikhs, by playing the “immigrant” card. She beseeched Haley “to distinguish fundamental American values from an aberrant political decision [on a temporary ban on the entry into the US of citizens from seven Muslim-majority countries], and to assert those enduring values in ways that allow us, as citizens and ambassadors, to continue to claim we represent the land of opportunity, the land of the free.”Raji continued: “You were appointed by a Republican president utterly unlike the Democratic president [Obama] who appointed me. Yet as US ambassadors, we represent our country, not the policies of a particular party or president.”Really? Obama would have begged to differ, though Raji clearly saw no conflict of interest between his values and those of America as a whole.Raji went on to advise Haley on how she could rectify what is certain to become America’s poor standing at the UN as a result of Trump’s measures. Among her suggestions was that Haley – who pledged on Tuesday to block anti-Israel actions at the world body – not “underestimate the desire for peace among the very people we risk antagonizing by forsaking the language of diplomacy in favor of intimidating speech.”She then told Haley that “despite what their leader says... the majority of Israelis favor a two-state solution.”This information, she said, “should inform your diplomacy around all areas of conflict throughout the world.”Raji also asserted that Haley “need not be an apologist for [Trump’s] trade policies... [she] need only assert America’s ongoing desire for international security, prosperity, stability, and peace through all vehicles meant to attain them including trade agreements, strategic alliances and initiatives to address climate change.”Iran is testing nuclear-capable cruise missiles, and Haley should worry about climate change. Right.“America is not... what it seems in any particular moment,” Raji warned. “The country that elected Barack Obama is the country that elected Donald Trump. The country that elected the son of an immigrant chose as that president’s successor a man intent on keeping immigrants out.”With sentiments like these, who needs genitalia-fashioned getups to explain the relief so many voters felt on election night? Haley will not heed Raji’s advice any more than Trump will make global warming a priority over global jihad. I thank God for that. The Left can credit Obama.

The writer is the managing editor of The Algemeiner.
Advertisement
Subscribe for our daily newsletter