No-one believed, neither in Rwanda nor outside it, that this small, divided Central African country would recover and rise from the ruins. 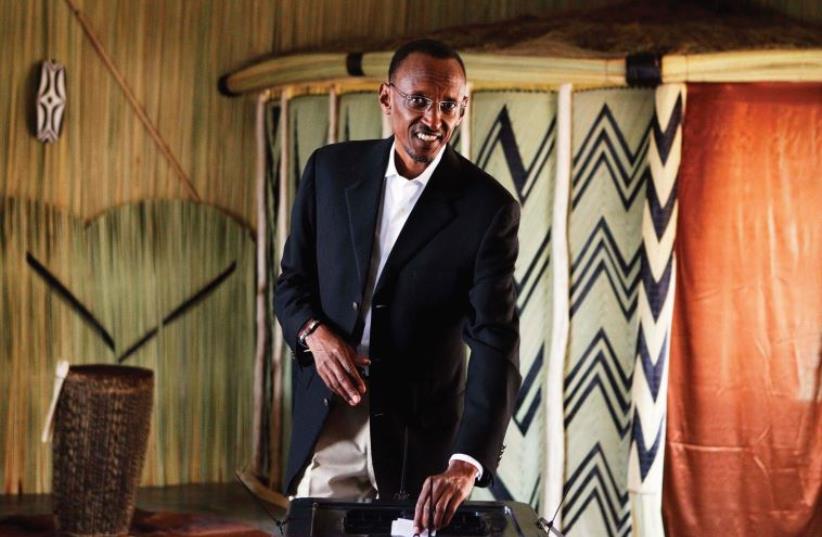 RWANDAN PRESIDENT Paul Kagame casts his ballot during the presidential election in Kigali in 2010
(photo credit: REUTERS)
Advertisement
On July 4 one of Israel’s closest friends on the African continent, Rwanda, celebrated its “Liberation Day.” This day has been celebrated for the past 21 years to mark the moment at which the Rwandan Patriotic Front (RPF) brought an end to the civil war which had ravaged the country and to the terrible genocide which was perpetrated against the Tutsi population by their Hutu compatriots.No-one believed, neither in Rwanda nor outside it, that this small, divided Central African country would recover and rise from the ruins. The civil war which began in 1990 reached its most sordid point in the 100 days in 1994 during which members of the Hutu tribe committed a large-scale massacre of Tutsi tribe members. Some one million Rwandans were killed, 70 percent of them Tutsis. Rwanda’s current president, Paul Kagame of the Tutsi tribe, who commanded the RPF military, led a clear policy of reconciliation under the banner of “no vengeance,” while steering the country’s divided populace toward a common future. Since 1994 the country has enjoyed political stability, alongside economic growth and an inspiring level of development.During my tenure as foreign minister I visited Africa twice. Last June I visited Rwanda. I had the honor of opening the Joint Israel-Rwanda Economic Seminar. I inaugurated a Center for Training and Excellence of Israel’s development agency MASHAV and the Rwandan Agriculture Ministry and signed a memorandum of understanding for upgrading the relations between our two countries. Despite the difficult events in Rwanda’s recent history, I found a country undergoing a process of construction and economic prosperity at the heart of a continent struggling with difficult challenges, civil wars and acute political and economic instability in numerous countries. In this regard, one need only consider the Boko Haram terrorist organization, an Islamic State offshoot in Nigeria which is active also in Cameroon, Chad and Niger, and A-Shabab, an al-Qaida proxy active in Somalia, to understand the depth of the contrast.This is why I was surprised and disappointed when certain European countries criticized President Kagame’s intention to initiate a constitutional change which would allow him to run for a third term in office in 2017, and even argued that he hasn’t done enough to uphold human rights.
See the latest opinion pieces on our page
In response, President Kagame objected, rightly, to these countries’ unfairness in their approach toward Rwanda in comparison to other countries in the region and around the world that do not abide by any international or Western standard of democracy or basic morality. I can well understand the exasperation of Mr. Kagame, under whose tenure Rwanda has become one of the most developed countries in Africa, and is undergoing a swell of development and economic growth.Despite the difficulties of the past, Rwanda is striding forward. This is true also in the realm of human rights, exemplified by the constitutional stipulations prioritizing gender equality and prohibiting discrimination of any kind, as well as banning ethnically-based political parties. As a result, the percentage of women in the parliament (64%) is the highest in the world. The comparable figures in Turkey are 14% and in Iran 3%, while the human rights situation in both of these countries is in continuous decline. Regime opponents are imprisoned, free speech – among the core values of democratic society – is brazenly trampled, while minorities and groups such as the LGBT community are persecuted on a daily basis.In a meeting which I held with the former president of the World Bank, Robert Zoellick, I heard only praise concerning the way in which Rwanda is proceeding as one of the most promising countries in Africa. The World Bank’s web page contains the following excerpt concerning Rwanda’s economy: “Rwanda has achieved impressive development progress since the 1994 genocide and civil war. It is now consolidating gains in social development and accelerating growth while ensuring that they are broadly shared to mitigate risks to eroding the country’s hard-won political and social stability.”The World Bank’s figures also indicate a significant decline in poverty and since 2005 a drop in socioeconomic disparities.Between 2001 and 2014, Rwanda’s GDP grew 9% a year on average, and it overcame its deficit, leading to a substantial improvement in the quality of life of the population.So I ask myself: are there countries in Europe that want to halt this economic growth and these tangible achievements? Is a third term for a popular president who has worked hard to heal national wounds and advance his country forward such a terrible thing? Many European countries don’t have term limits, such as Germany, where the chancellor is serving her third term.Legislative and constitutional changes are not impossible to implement. The United States is a case in point. Prior to the enactment of the 22nd Amendment in 1951, which limited US presidents to two terms, president Roosevelt served four terms in office.In stark contrast to the criticism of Rwanda, which maintains a democratic presidential system that has ushered in a period of prosperity, I haven’t heard even the slightest hint of censure from those who profess to uphold democratic principles, with regard to Mahmoud Abbas’ ongoing deferral of elections to the Palestinian presidency and parliament, which were last held in 2006.Nor have they been particularly vocal when countries such as Syria, Iran, Libya, Iraq and many countries in Africa infringe on human rights and persecute women and children. Needless to say, no one seems to be complaining about the lack of democracy in Qatar or other non-democratic countries in the Middle East.I believe the statements against Rwanda are misplaced and could well lead to disaster, by impinging on the continued recovery and development of the country. I call on democratic countries to support the current government and to become engaged only insofar as such engagement might assist and strengthen the country’s process of development, rather than hamper it.The author is a member of Knesset and former foreign minister of Israel.