There seems to be a policy of ignoring safety rules and a lack of enforcing regulations and ensuring that people who violate them are punished. 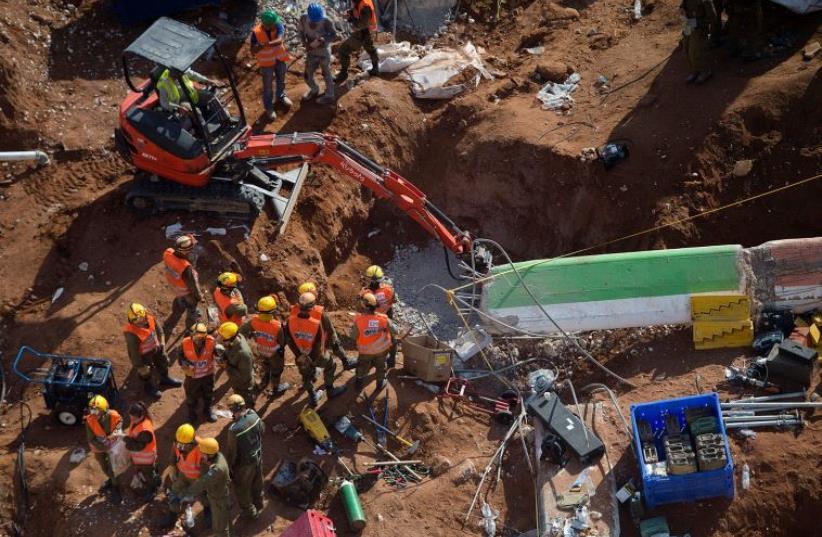 Scene of building collapse in Tel Aviv's Ramat Hachayal neighborhood
(photo credit: IDF SPOKESMAN’S UNIT)
Advertisement
The collapse of a parking garage under construction in Tel Aviv focused the nation’s attention on the massive efforts to rescue construction workers from the rubble. The fact that several workers were killed, but many more were saved, seemed to fit the usual Israeli disaster calculus: Misfortune is inevitable, so if more are saved than lost, we come out ahead. But construction failures are not inevitable, and we fail to prevent them at our continued peril.The worst civil disaster in Israel’s history is commonly known as the Versailles Wedding Hall collapse. On May 24, 2001, the third floor of the Jerusalem building collapsed during a wedding, sending 23 celebrants to their deaths and injuring another 380 people. An investigation found the cause to be a combination of faulty engineering and unauthorized remodeling by the hall owner.The three owners of the hall were convicted of causing death and damage by negligence and sentenced to up to 30 months’ imprisonment, while four construction engineers were convicted of causing death by negligence and sabotage by negligence and sentenced to up to four years.Versailles was a disaster waiting to happen and impossible to ignore – but unfortunately numerous severe accidents go unnoticed, even though they cost many more lives.Israel has one of the highest rates of construction accidents in the West, a 2015 joint report by the safety administration in the Economy Ministry and the department of disabilities in the National Insurance Institute found. Last year some 50,000 people were injured and 54 were killed in work accidents, most of them construction workers. Between 2000 and 2015, 480 people were killed in construction accidents, the report found, concluding that construction workers in Israel are five times more likely to be killed on the job compared to workers in other industries.The Economy Ministry/NII report also found that half the workers killed and maimed in construction accidents were sub-contracted, a ploy by contractors to evade responsibility for deaths and injuries that is enabled by lax authorities. In 2015 foreign and Palestinian workers were twice as likely to lose their lives as Israeli construction workers.“The contractors do not at present have enough incentives to make their sites safe,” said Reuven Ben-Shimon, a safety administrator and founder of the Forum Against Work Accidents. “Without significant investment by the state in this issue we will continue to bury workers.” Twenty- eight construction workers have been killed on the job in the first half of 2016.A March 2014 report submitted by a public panel headed by Maj.-Gen. (res.) Udi Adam unsurprisingly concluded, “The government of Israel must take comprehensive preventive steps.” Unsurprisingly, no such steps have been taken.“Implementation of the main recommendations in the Adam report was to have fundamentally changed the way the state treats safety in the workplace,” State Comptroller Joseph Shapira wrote. He noted that only 2 percent of the building sites where accidents occurred in recent years were investigated by Economy Ministry inspectors; about 50 percent of all workplaces have never been inspected.How does the parking garage collapse in northeastern Tel Aviv’s Ramat Hachayal neighborhood fit in to the context of construction accidents? Before the completion of an investigation as to its cause, the Economy Ministry safety administration would reveal only that the construction company, Danya Cebus, has a history of violations.Ya’acov Bloch, a professor in civil engineering at Ariel University, told The Jerusalem Post that poor regulatory enforcement is at fault. “Every engineer is insured in their company against failures. If the engineer makes a mistake, and there is damage, the insurance company will cover the loss. But if there is bodily harm, there’s a criminal investigation, and the insurance probably won’t cover it,” he said. Thus, he said, regulators tend to overlook infractions unless a worker is injured.There seems to be a policy of ignoring safety rules and a lack of enforcing regulations and ensuring that people who violate them are punished. The Economy Ministry’s safety division has fewer than 20 inspectors with a handful of vehicles who need to oversee thousands of construction sites.The construction cranes perched over building sites throughout the country can no longer be seen as merely positive symbols of building the nation, when so much is built with the blood of construction workers.